“Cold, hunger, darkness and thirst are not as scary and deadly for us as your ‘friendship and brotherhood’.”

These were the words of President Volodymyr Zelenskyy to Russia six days after September 6, when Ukraine began its surprising counteroffensive in Kharkiv.

Since the pushback began, Ukraine has recaptured strategically important hubs on the eastern and southern axes.

On September 12, Zelenskyy announced that Ukraine had regained about 6,000 square kilometres (2,320 square miles) of territory - a sliver of the country's landmass of more than 600,000sq km (232,000sq miles), of which less than a fifth is currently under Russian occupation.

This has pushed the front lines further to the east and, in turn, reversed months of Russian territorial gains within a matter of weeks.

For the first time since the invasion began, pro-Kremlin public figures, media and military bloggers are criticising Putin’s war strategy.

And Ukrainian officials say they remain committed to the counteroffensive, even after a sharp escalation this month with heavy Russian air raids on cities across Ukraine in apparent retaliation for a blast on a bridge of strategic value to Moscow’s troops.

Putin has blamed Ukraine for destroying part of the Kerch Strait Bridge linking Russia to Crimea, which it annexed in 2014, but Kyiv has not directly claimed responsibility for the explosion.

Meanwhile, Ukraine has been pushing for more advanced weaponry from its Western allies to help its forces keep fighting.

Ukraine’s defence minister Oleksii Reznikov was asked by reporters what he expected from NATO as he arrived for a meeting on October 12 in Brussels.

“Air defence systems,” he said, and walked away.

Ukraine's counteroffensive in Kharkiv began on September 6, with Kyiv's forces recapturing more than 3,000sq km (1,160sq miles)  of territory in less than a week, according to Deputy Minister of Defence, Hanna Malyar.

Large enclaves of Kharkiv had been occupied by Russia from the onset of the invasion on February 24 with strategically important towns like Izyum falling in late March.

But ultimately, Kyiv benefitted from a weaker presence of Russian fighters in the east because Moscow had redeployed forces to Donetsk and the southern axis in response to a Ukrainian offensive in Kherson. In the weeks following, Kyiv regained more territory south of Kharkiv. 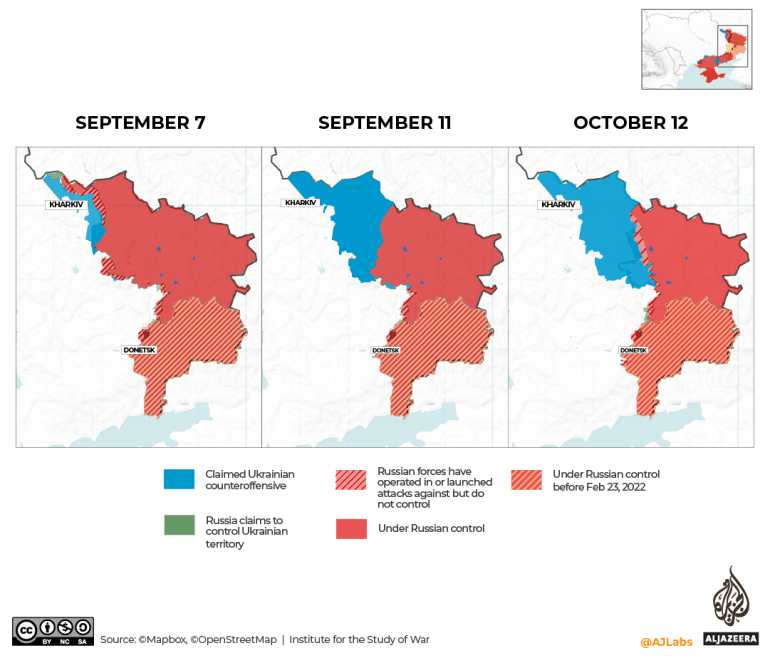 Ukrainian forces recaptured Izyum in eastern Ukraine on September 12 - its most significant military success since the Battle of Kyiv in March, according to the Institute for the Study of War (ISW).

This dealt a severe blow to Russia, weakening Moscow's ability to carry out artillery attacks since the town was a significant hub for targeting the Donetsk region.

After the Russian retreat, mass graves and torture chambers were found by Ukrainian forces. The Ukrainian General Staff shared images on September 16 of a mass burial site that was said to hold more than 400 bodies, including remains of women and children.

It was a reminder of the alleged Russian brutality in Bucha discovered in March, where authorities said they found more than 450 bodies in mass graves.

“Russia leaves death everywhere and must be held accountable for it,” Zelenskyy said after the grim discoveries.

Ukrainian forces recaptured Lyman, in Donetsk, in Ukraine’s eastern Donbas region on October 2 after four months of occupation. Moscow was using Lyman as a crucial railway junction to resupply troops.

According to the ISW, Russian fighters - even in the most highly trained units like those posted to Lyman - suffer from war fatigue and Kremlin sources and military bloggers are attributing the defeat to army failures to sufficiently supply and reinforce troops in the Donbas region.

Similar to Kharkiv, Ukrainian authorities claimed to have found a mass grave in Lyman on October 7, with Donetsk Governor Pavlo Kyrylenko saying it was unclear how many bodies were buried.

Kyrylenko wrote on Telegram on October 7  that “there could be both soldiers and civilians” in the mass graves.

According to Ukrainian southern military command spokesperson, Natalia Humeniuk, Ukraine has recaptured more than 1,170sq km (450sq miles) of territory in the southern region of Kherson since late August, when it launched its southern counteroffensive. In comparison with its swift advances around Kharkiv, attacks on the southern axis have been more laboured.

A flat, agricultural region, Kherson produces 10 percent of Ukraine’s millet, 8 percent of its soybeans and 6 percent of its barley and is a key economic and strategic region for Ukraine. It also became a strategically significant region for Russia given its proximity to Crimea and Russian territorial losses there are likely to threaten its supply lines. 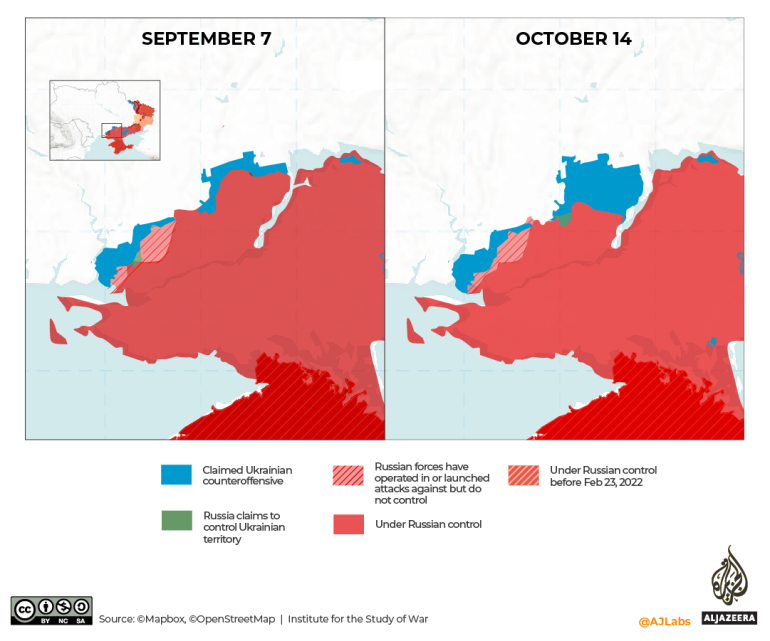 Other territorial gains include areas in Luhansk, where on September 19, according to Governor Serhiy Haidai, Ukrainian forces regained control of Kreminna town and Bilohorivka village close to the city of Lysychansk, which fell to Russian forces in July.