Serbs in Bosnia’s Republika Srpska entity are marking the 31st anniversary of the entity’s founding, despite a court ban against the event, which is essentially a military parade.

Bosnia & Herzegovina’s Constitutional Court declared the January 9 “Republika Srpska Day” illegal and unconstitutional in November 2015, stating that the event is discriminatory against non-Serbs there.

But Republika Srpska authorities have continued to mark the day each year as a public holiday – the 1.2 million people who live in the entity, for instance, are not expected to work.

Celebrations are typically held in Banja Luka, the de-facto capital of the Republika Srpska entity, but this year for the first time, the event takes place in Serb-majority East Sarajevo, where Republika Srpska’s administrative centre sits. 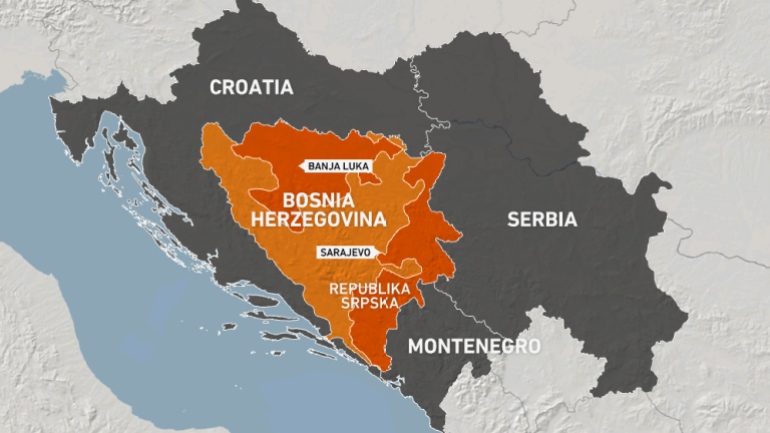 Why is this day controversial?

On January 9, 1992, the Bosnian Serb assembly issued a declaration proclaiming Republika Srpska as an independent “Republic of the Serb people of Bosnia and Herzegovina”, with the goal of joining proclaimed Serb autonomous regions they had carved out in the country with Serbia and Montenegro.

The move set off the war in Bosnia, resulting in 100,000 deaths and a genocide in Srebrenica, as Croat and Serb forces attempted to divide the country into Greater Croatia and Greater Serbia respectively.

The conflict ended with the US-brokered Dayton Peace Agreement signed in December 1995, which split the country into two semi-autonomous parts – the Serb-majority Republika Srpska entity, comprising 49 percent of the country – and the Federation entity, where most Bosniaks and Croats live.

Much of Serb society, including its leadership in Republika Srpska, glorifies convicted war criminals such as former Serb General Ratko Mladic and former Serb political leader Radovan Karadzic – international courts found both guilty of genocide in Srebrenica and for overseeing the 44-month siege of Sarajevo.

Karadzic, along with convicted Serb war criminals Biljana Plavsic and Momcilo Krajisnik, is considered among the founders of Republika Srpska.

In 2021, the Office of the High Representative (OHR) in Bosnia set jail terms for anyone who “publicly condones, denies, grossly trivialises or tries to justify” war crimes committed in Bosnia.

US-blacklisted Milorad Dodik, president of Republika Srpska, regularly attends January 9 celebrations and continues to push for the entity’s secession with the goal of uniting with Serbia.

At an awards ceremony on Sunday in Banja Luka, Dodik awarded Russian President Vladimir Putin in absentia with the highest medal of honour for his “patriotic concern and love” for Republika Srpska.

Many were alarmed by the display of militarism on show, as special police units of the Republika Srpska entity chanted songs seen as provocative for non-Serb survivors of the war in the early 1990s.

What has the reaction been this year?

Sarajevo Mayor Benjamina Karic said on social media last week that the “unconstitutional marking of January 9 is moving to East Sarajevo, practically to the gates of the city that was under terror from the aggressor and under the longest siege in modern history”.

During the 1992-1995 war, Serb forces held the capital Sarajevo under siege, where civilians were regularly attacked by snipers and shelling.

East Sarajevo Mayor Ljubisa Cosic said protests against the day announced by civil society “show the extent of their ill will for people who live beside them.

“All of this speaks about how this project called Bosnia & Herzegovina (BIH) is impossible,” Srna news agency quoted Cosic as saying.

On Wednesday, Bosnia’s top official, High Representative Christian Schmidt, sent a letter to Dodik and other senior Republika Srpska figures, reminding them that court rulings “need to be respected”, according to SrpskaInfo news website.

Last month, Schmidt’s office said Bosnia’s prosperity should be built on mutual reconciliation, which requires respect for the law.

“Therefore, they have to be named as criminals and not heroes. I ask all public officials in BIH to respect this and move towards a shared future. The Dayton Peace Agreement has laid the basis for peaceful development, and it must be respected.”