Ukraine says it is strengthening its forces around Bakhmut in the eastern Donbas region and repelling constant attacks there by the Russian mercenary group Wagner.

Kyiv has sent reinforcements to Soledar, a small town near Bakhmut where the situation was particularly difficult, Ukrainian officials said on Monday.

“The enemy again made a desperate attempt to storm the city of Soledar from different directions and threw the most professional units of the Wagnerites into battle,” Ukraine’s military said in a statement.

Yevgeny Prigozhin, Wagner’s founder, has been trying to capture Bakhmut and Soledar for months at the cost of many lives on both sides. He said on Saturday that its significance lay in the network of mines there.

“It not only [has the ability to hold] a big group of people at a depth of 80 to 100 metres, but tanks and infantry fighting vehicles can also move about,” Prigozhin said. 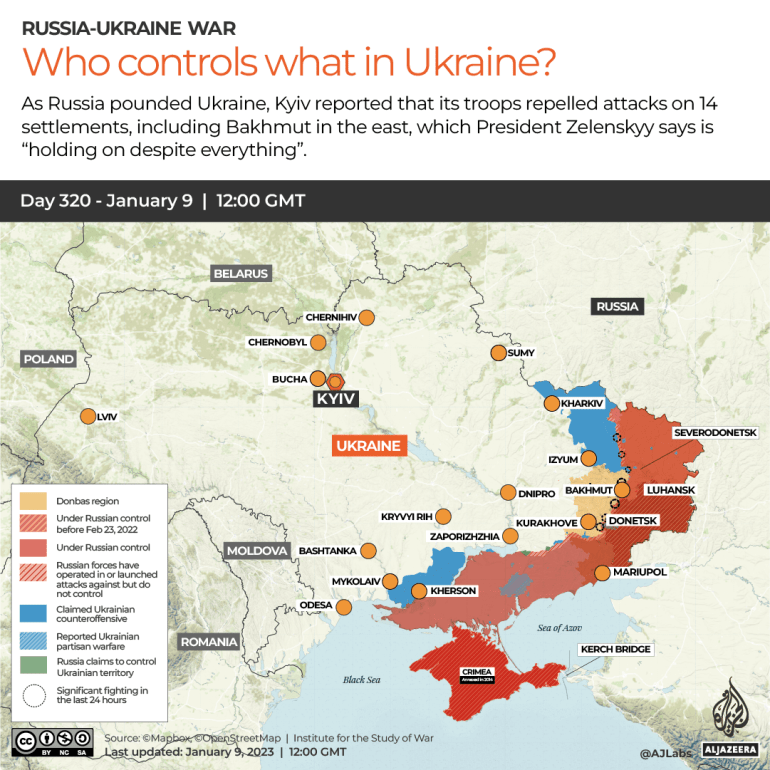 Military analysts said the strategic military benefit for Moscow would be limited. A US official has said Prigozhin, a powerful ally of Russian President Vladimir Putin, wants the salt and gypsum from the mines.

Ukrainian President Volodymyr Zelenskyy said in his nightly video remarks on Sunday that Bakhmut and Soledar were holding on despite widespread destruction after months of attacks.

“Our soldiers are repelling constant Russian attempts to advance,” he said. In Soledar, “things are very difficult.”

Further north in the Kharkiv region, a Russian missile strike on a marketplace in the village of Shevchenkove killed two women and wounded four people, including a 10-year-old girl, regional prosecutors said.

Video footage from police and Ukraine’s presidential office showed badly injured people lying on the ground and rescue workers sifting through piles of rubble, burning stalls and a large crater. A police officer carried a girl with blood on her face from the scene.

Andriy Yermak, head of the Ukrainian presidential administration, called the perpetrators “common terrorists” in a Telegram post. Russia did not immediately comment on the reported missile attack on the village, which Kyiv recaptured from Moscow in September.

Zelenskyy made a new denunciation of what he called Russia’s failure to observe a ceasefire it had declared for Russian Orthodox Christmas on Friday and Saturday.

Ukraine did not agree to the ceasefire, which it called a Russian excuse to reinforce its troops. Both sides accused the other of continuing hostilities over the holiday.

“Russians were shelling Kherson with incendiary ammunition immediately after Christmas,” he said, referring to the southern city abandoned by Russian forces in November. Air strikes also hit Kramatorsk and other cities in the east, he said.

On Sunday, Russia said a missile strike on Kramatorsk had killed 600 Ukrainian soldiers, although Ukraine denied there were any casualties in the attack.

As Moscow’s invasion of Ukraine grinds towards the one-year mark, Russia’s military is under domestic pressure to deliver battlefield successes.

Hawkish voices have sought an escalation of the war effort after the loss of captured territory and high rates of deaths and injuries.

Russia, which initially cited a need to rid Ukraine of nationalists, now says it is fighting a Western threat to its own existence. Kyiv and its Western allies, which have imposed broad sanctions on Moscow and sent Ukraine weapons to defend itself, say the invasion was entirely unprovoked.

Meanwhile, the United Kingdom is considering supplying Ukraine with tanks for the first time, Sky News reported, citing a Western source. There was no immediate comment from Britain’s Ministry of Defence. France, Germany and the United States all pledged last week to send armoured fighting vehicles, fulfilling a major long-standing request of Kyiv.

The Kremlin said new deliveries of Western weapons would “deepen the suffering of the Ukrainian people” but not affect the outcome of the conflict.