Two years ago, on January 6, 2021, a crowd of thousands attacked the United States Capitol in an effort to stop the certification of the 2020 election results, spurred on by false claims the election had been “rigged” against Republican incumbent Donald Trump.

More than 2,000 people entered the Capitol building, smashing windows, ransacking offices, defecating in public spaces and searching for members of Congress. The assault was ultimately unsuccessful but it has set off alarm bells about the stability of US democracy and the growing influence of anti-democratic elements within the Republican Party.

On the second anniversary of the riot, President Joe Biden is set to hold a White House ceremony in the East Room Friday to commemorate the deadly events that unfolded that day.

The US continues to grapple with the fallout from the attack. More than 950 people have been charged with federal crimes relating to the riot, with some facing accusations of seditious conspiracy – a rare but serious offence.

The US Department of Justice on Wednesday said that 192 of those defendants have been sentenced to time behind bars and 484 have pleaded guilty to various crimes.

An investigative committee in the US House of Representatives recommended criminal charges last month for key political figures linked to the attack, including Trump who was presiding at the time and encouraged the rioters.

Al Jazeera looks at what has happened to some of the most high-profile instigators of and participants in the January 6 attack.

The former Republican president has refused to concede the 2020 election, turning his false claims of election fraud into a rallying cry for some in his party.

But those claims have come with repercussions. The former president had already been impeached and acquitted once in his presidency in 2019 for abuse of power and obstruction of Congress. He was impeached a second time for “inciting” the January 6 riot. It had caused legislators and the then-vice president to go into hiding and left an estimated 140 police officers injured. A Senate report last June documented seven deaths connected to the attack, including three members of law enforcement. Trump was acquitted in his second impeachment.

Trump was also front and centre during the House’s January 6 investigation. The committee in charge of the investigation subpoenaed the former president to testify, but he refused.

But using hundreds of interviews, including with some of Trump’s closest advisers, the committee compiled an 845-page report detailing the former president’s activities on and around January 6. 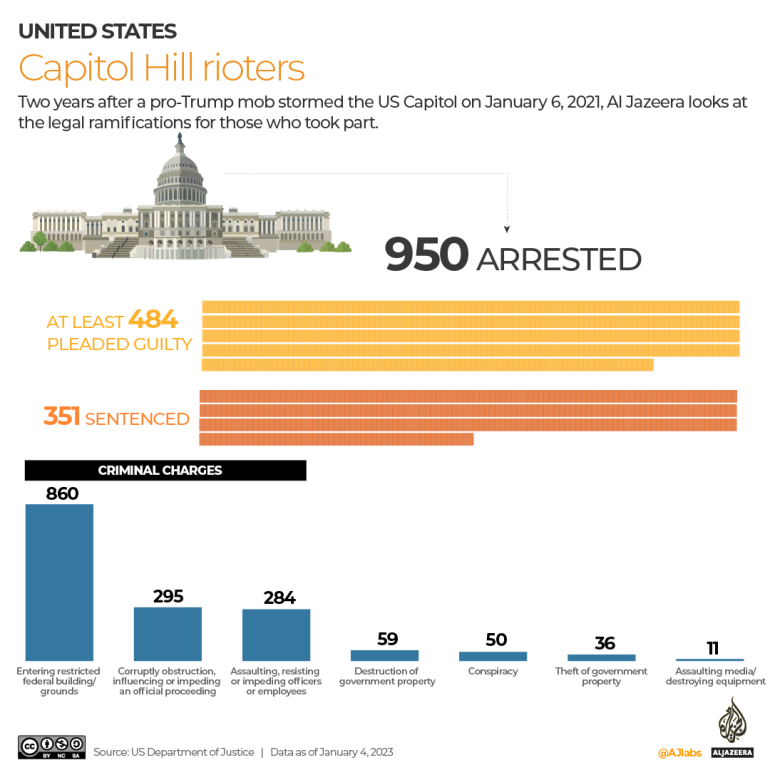 It also sent non-binding criminal referrals to the US Department of Justice, including four charges against Trump which included assisting or inciting an insurrection. The committee has since disbanded, in anticipation of a Republican majority taking control of the House.

Trump has continued to spread the “stolen election” lie and has used his heft in the party to elevate candidates who mirror his false claims, with mixed results. Many election-deniers fared poorly in the 2022 midterm elections. Trump also faces several continuing legal investigations, including cases in Georgia and New York.

The former president announced in November that he would compete for the White House again in 2024.

Stewart Rhodes of the Oath Keepers: guilty of seditious conspiracy

A number of far-right groups have gained attention for their roles in the January 6 attack. One of those groups is the Oath Keepers, an anti-government militia that calls on its members to fulfil the oath US service members take: to “defend the Constitution against all enemies, foreign and domestic”.

The group’s founder is Stewart Rhodes, a former US Army paratrooper and Yale-educated lawyer who often wears an eyepatch to cover an injury sustained during a firearm accident.

Rhodes and several of his fellow Oath Keepers were the first to face seditious conspiracy charges in relation to the January 6 attack. The serious but rarely used charge implies that a defendant conspired to overthrow the government, oppose its authority or hinder its laws.

The US Department of Justice alleged that the Oath Keepers were “prepared and willing to use force” to prevent the peaceful transfer of power. They argued that the January 6 attack was coordinated.

But Rhodes and his co-defendants denied those claims, testifying that there was no plan to enter the Capitol building.

On November 29, a jury found Rhodes guilty of seditious conspiracy, in one of the most significant convictions to stem from the Department of Justice’s investigations. Rhodes faced up to 20 years in prison as he awaited sentencing.

Another codefendant, Kelly Meggs, was also found guilty of seditious conspiracy while three other defendants – Kenneth Harrelson, Jessica Watkins and Thomas Caldwell – were acquitted of the charge.

All five were found guilty of obstructing an official proceeding, with mixed verdicts on other charges.

Enrique Tarrio of the Proud Boys: on trial

The Oath Keepers trial was seen as a litmus test for another case against a far-right group, the Proud Boys.

The all-male group describes itself as “Western chauvinists” and is associated with white supremacy, anti-immigration sentiment and misogyny.

On January 6, members of the Proud Boys were among those that stormed the US Capitol, though its leader, Enrique Tarrio, was not present. He had been barred from entering Washington, DC as a condition of his bail, after being arrested for vandalising a Black Lives Matter banner.

Still, Department of Justice prosecutors have alleged he played an active role behind the scenes during the Capitol attack, encouraging his followers to subvert the democratic process and halt the peaceful transfer of power.

Tarrio faces seditious conspiracy charges alongside four other members: Joseph Biggs, Ethan Nordean, Zachary Rehl and Dominic Pezzola. All five have pleaded not guilty. They face potential prison sentences of up to 20 years. The trial is expected to take about six weeks from start to finish.

Another top member of the Proud Boys, Charles Donohoe, pleaded guilty to charges of conspiracy to obstruct an official proceeding and assaulting and impeding police officers in April 2022.

One of the most recognisable figures from the January 6 attack was Jacob Chansley, whose horned headdress and face paint earned him the nickname “QAnon shaman”.

Chansley was a supporter of the QAnon conspiracy theory, which posits that an anonymous figure named Q has secret information about a deep-state “cabal” inside the US government. Trump figures into the conspiracy theory as a hero figure, capable of rooting out the cabal.

Photographed standing atop the Senate rostrum during the January 6 attack, Chansley was ultimately sentenced to 41 months in prison.

His sentence matched that of another participant, ex-mixed martial artist Scott Fairlamb, who was captured on film punching a police officer. He, too, received 41 months in prison in November 2021, one week before Chansley.

Prison officials have since diagnosed Chansley with transient schizophrenia, bipolar disorder, depression and anxiety. Chansley had hoped that Trump would pardon him for his actions.

In March 2022, a Texas man named Guy Wesley Reffitt became the first participant to be convicted of storming the Capitol. It was a first victory for federal prosecutors pursuing hundreds of cases stemming from the riot.

While Reffitt did not personally enter the Capitol, the Department of Justice said he arrived “armed and determined to instigate violence” on the Capitol grounds.

Prosecutors allege he helped charge at Capitol police officers outside the building, leading other rioters up the stairs to the Capitol doors. “We’re taking the Capitol before the day is over,” Reffitt reportedly said.

He was ultimately convicted of storming the Capitol with a loaded handgun, interfering with police officers guarding the building and obstructing justice by threatening his two children to dissuade them from reporting him to law enforcement.

Reffitt was handed a sentence of seven years and three months.