It was a terrible week for Ukraine.

On January 12, Russian forces took effective control of Soledar in Donetsk, their first capture of a town since July.

One levelled an apartment building in the city of Dnipro, killing more than 40 people in one of the war’s deadliest attacks. Ukraine blamed Russia, but the Kremlin denied responsibility.

And on the morning of January 18, the entire leadership of Ukraine’s interior ministry was killed, part of a death toll of 14, when a helicopter crashed outside a nursery near Kyiv. It wasn’t immediately known if the crash was an accident.

Soledar, a salt-mining town, fell to Russian forces after a week of ferocious fighting.

Geolocated images showed Russian soldiers in control of much of the town on January 12. The Russian defence ministry declared victory the following day, as Russian military sources said Moscow’s troops had already advanced to Krasnaya Gora to the southwest, and only faced serious resistance in salt mine number seven. 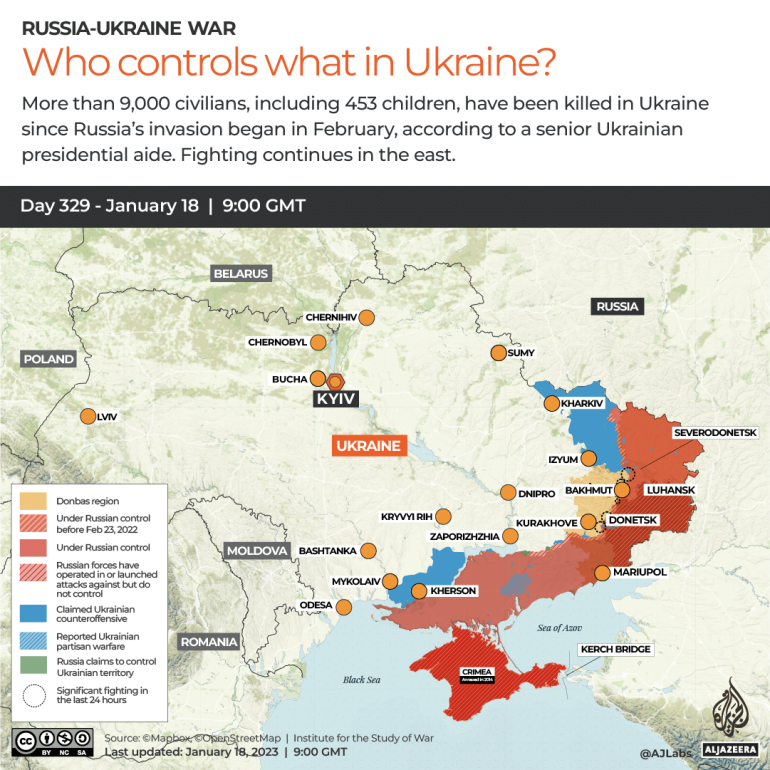 “The Ukrainian military in incredibly difficult weather conditions under heavy enemy fire keep the situation under control,” Cherevaty said, noting there were small advances and retreats, but no decisive breach.

“The occupiers have suffered colossal losses during this entire period, and have not been able to systematically break through our defence anywhere,” he said.

Russia’s only good news in six months was marred by its command divisions.

Russia’s defence ministry triggered an online spat by claiming that victory in Soledar was solely thanks to the regular armed forces, without acknowledging the Wagner Group of mercenaries, which days earlier had also claimed sole credit for the victory.

“The capture of Soledar became possible due to constant fire attacks launched at the enemy by Ground-Attack and Army Aviation, Missile Troops and Artillery of the Russian Group of Forces,” the ministry said.

Russia has relied on the Wagner Group to do much of the fiercest fighting in the eastern Donbas region, comprising Luhansk and Donetsk.

Wagner owner Yevgeny Prigozhin said the company was “threatened” by corrupt bureaucrats who “want to stay in their places … They constantly try to steal victory from Wagner [troops] … just to belittle their merits.”

The ministry issued a correction, saying the Soledar offensive was “carried out by a heterogeneous grouping of Russian troops [forces] according to a single plan”.

Russian President Vladimir Putin praised the armed forces at a press conference on January 15, pointedly making no mention of the Wagner Group.

“The Wagner Group has its own tanks, artillery and drones, while maintaining an independent command and control system. In effect, it functions as a combined arms force. This victory is definitely credited to the Wagner Group, which is bound to affect relations with the Russian army,” Emmanuel Karagiannis, an international security expert from King’s College London, told Al Jazeera.

Though less reported, battles raged for the Russian-occupied town of Kreminna further north, in Luhansk, showing that Ukraine was still in a position to mount counterattacks.

The fight for Bakhmut has raged for months, and is set to intensify.

“The battle of Bakhmut is the key to both sides’ future plans in Donbas. If the Russians manage to occupy the town, they will try to regain some of the territory lost since September,” said Karagiannis.

“If the Ukrainians defend the town successfully, they can ask for more western support for their spring counterattack in the region. At present, the Ukrainian army does not seem to have either the reserves or the equipment to push deeper into Donbas.”

Ukraine has said it will mount a spring offensive across the entire front by March, and hopes to push Russian forces out this year.

A ‘turning point’ in the war

On the day the city fell, NATO Secretary-General Jens Stoltenberg called for faster delivery of weapons to Ukraine.

“Timing is critical,” he tweeted. “We need to provide more advanced equipment faster.”

Stoltenberg targeted elites in Germany, where support for the war has wavered.

A poll by Euroskopia this week found that 60 percent of Germans favoured an early ceasefire with territorial concessions to Russia – something Ukraine has ruled out.

But Germany’s approval is needed for the mobilisation of German-built Leopard 2 battle tanks, used by 14 European countries, making it the only plentiful battle tank in production in Europe.

Poland and Lithuania have already signalled they would send some of their Leopards to Ukraine.

Asked whether Germany should provide heavier weapons, a reference to tanks, NATO chief Stoltenberg told German business newspaper Handelsblatt: “We are in a decisive phase of the war. We are experiencing fierce fighting. Therefore, it is important that we provide Ukraine with the weapons it needs to win – and to continue as an independent nation.”

In the midst of this pressure on an uncertain Germany, its Defence Minister Christine Lambrecht resigned on January 16, citing “months of media focus on my person”.

Some personal gaffes aside, Lambrecht was criticised for being slow to use a 100 billion euro ($108bn) spending increase to pull the German military out of mothballs.

The release of battle tanks to Ukraine was Pistorius’s “first question to be decided concretely,” Finance Minister Robert Habeck said.

But Britain beat everyone to the punch.

Prime Minister Rishi Sunak’s office said on January 14 that the United Kingdom would become the first country to provide main battle tanks to Ukraine, saying, “a window has opened up where Russia is on the back foot due to resupply issues and plummeting morale”.

The UK was to send 14 Challenger 2 main battle tanks “in the coming weeks” to work in combination with 50 Bradley Fighting Vehicles the US is sending Ukraine to spearhead a battalion.

The UK was also sending spare parts to refurbish up to 100 tanks and infantry fighting vehicles that would further increase Ukraine’s active fleet.

Thirty AS90 howitzers would follow, as well as “hundreds” of armoured and protected vehicles, dozens of drones to help direct artillery strikes, plus Starstreak air defence and medium-range air defence missiles. Training was to begin “almost immediately” in countries neighbouring Ukraine.

UK Defence Secretary Ben Wallace told Parliament it was “the most significant package of combat power to date” from the UK, and meant Ukraine “can go from resisting to expelling Russian forces from Ukraine”.

But Britain was also trying to encourage other allies “to deploy their planned support for 2023 as soon as possible to have maximum impact”, Sunak’s office said.

Russian chief of staff Valery Gerasimov’s elevation to commander of the war effort in Ukraine means a renewed Russian offensive is expected, possibly before winter is over.

“With Gerasimov’s deference to the president never in doubt, we would now expect a trend back towards a Russian offensive,” Wallace said.

Ukraine’s military intelligence said Russia was preparing to launch a new round of mobilisation to create an army of two million troops.

This is even more than the 1.5 million-man army that Russian Defence Minister Sergei Shoigu announced in December and that the Ukrainian general staff confirmed was under way on January 12.

Major decisions are therefore expected from the Ukraine Defense Contact Group meeting on Thursday and Friday in Ramstein.

On his way to the meeting, Chairman of the United States Joint Chiefs of Staff Mark Milley stopped to meet his Ukrainian counterpart Valerii Zaluzhnyi for the first time at an undisclosed military base in southeast Poland.

Zaluzhnyi would “describe the tactical and operational conditions on the battlefield and what the military needs are for that”, said Colonel Dave Butler, Milley’s spokesman. Milley was expected to share that information with his peers at Ramstein, but the mood already seemed to be shifting in Ukraine’s favour.

Lithuanian Foreign Minister Gabrielius Landsbergis said he was “confident” more countries would send battle tanks to Ukraine. “There is momentum”, he said, after talking with other leaders at the World Economic Forum in Davos, Switzerland.