Rescuers recovered 68 bodies out of the 72 people on board the ATR 72 aircraft operated by Yeti Airlines that crashed in the tourist city of Pokhara minutes before landing on Sunday in clear weather.

The plane, on a scheduled 27-minute flight from Kathmandu to Pokhara, gateway to the scenic Annapurna mountain range, was carrying 57 Nepalis, five Indians, four Russians, two South Koreans, and one person each from Argentina, Ireland, Australia and France. 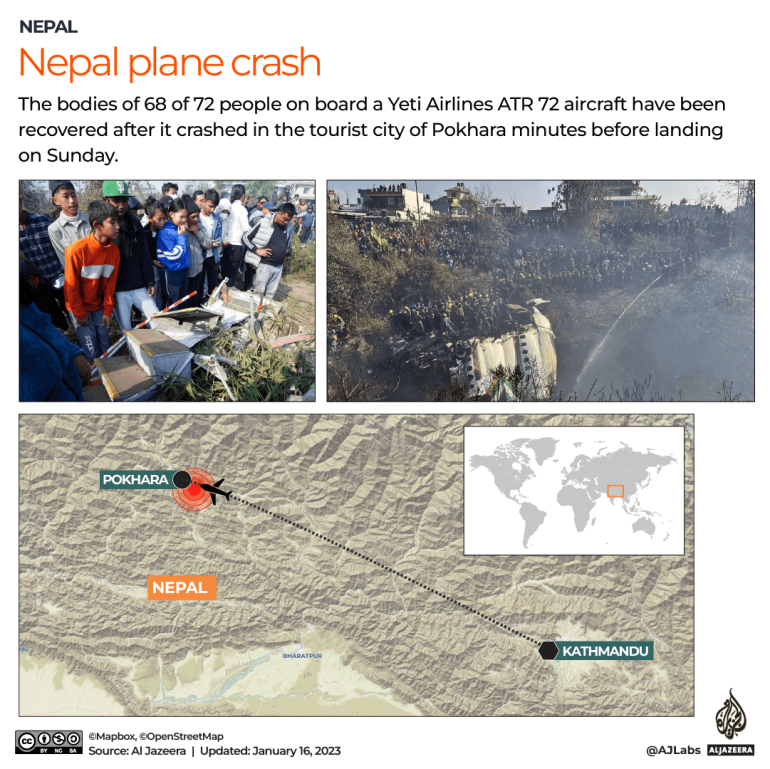 Rescuers were battling cloudy weather and poor visibility as they scoured the the 300-metre (1,000-foot) deep river gorge for passengers who were unaccounted for, more than 24 hours after the crash.

Debris from the airliner was strewn across the crash site, including the mangled remains of passenger seats and the plane’s white-coloured fuselage.

Soldiers used ropes and stretchers to retrieve bodies from the ravine late into the night, with recovery efforts resuming on Monday.

“We have collected 68 bodies so far. We are searching for four more bodies. We should continue until we get the bodies,” senior local official Tek Bahadur KC told AFP.

“We pray for a miracle. But the hope of finding anyone alive is nil,” he said.

Authorities said bodies will be handed over to families after identification and examination.

The cause of the crash was not yet known but a video on social media – verified by AFP and The Associated Press news agencies – showed the twin-propeller aircraft banking suddenly and sharply to the left as it approached Pokhara airport. A loud explosion followed.

At least one witness reported hearing cries for help from within the fiery wreck, said the AP report.

Local resident Bishnu Tiwari, who rushed to the crash site near the Seti River to help search for bodies, said the rescue efforts were hampered by thick smoke and a raging fire.

“The flames were so hot that we couldn’t go near the wreckage. I heard a man crying for help, but because of the flames and smoke we couldn’t help him,” Tiwari said.

Searchers on Monday found both the cockpit voice recorder and flight data recorder from the flight. The data on the recorders may help investigators determine what caused the aircraft to crash.

Both recorders were in good shape and would be sent for analysis based on the recommendation of the manufacturer, Teknath Sitaula, an official at the Kathmandu airport, told Reuters.

Prime Minister Pushpa Kamal Dahal rushed to the airport after the crash on Sunday. He also announced the setting up of a panel to investigate the disaster and suggest measures to avoid such incidents in the future.

“Our first thoughts are with all the individuals affected by this,” the plane’s France-based manufacturer ATR said in a statement on Sunday.

“ATR specialists are fully engaged to support both the investigation and the customer.”

Nearly 350 people have died since 2000 in plane or helicopter crashes in Nepal, home to eight of the world’s 14 highest mountains, including Everest, where sudden weather changes can make for hazardous conditions.

According to the Flight Safety Foundation’s Aviation Safety database, there have been 42 fatal plane crashes in Nepal since 1946.

Sunday’s crash is Nepal’s deadliest since 1992, when all 167 people aboard a Pakistan International Airlines plane were killed when it plowed into a hill as it tried to land in Kathmandu.

The European Union has banned airlines from Nepal from flying into the 27-nation bloc since 2013, citing weak safety standards, according to the AP report.

In 2017, the International Civil Aviation Organisation cited improvements in Nepal’s aviation sector, but the EU continues to demand administrative reforms.