Ukrainian President Volodymyr Zelenskyy claimed a series of battlefield successes during his forces’ counteroffensive against Russian troops in the occupied southern region of Kherson.

Zelenskyy thanked soldiers for taking two settlements in the south along with additional territory in the east, citing “good reports” from his military commanders and intelligence chief.

Kyrylo Tymoshenko, deputy head of the president’s office, posted an image of troops on Sunday raising the Ukrainian flag over a village he said was in the south, which is the main focus of the counterattack.

“Vysokopillya. Kherson region. Ukraine. Today,” Tymoshenko wrote on Facebook over a photograph of three soldiers on rooftops, one of them fixing a Ukrainian flag.

Ukraine began the counteroffensive last week, targeting the south, particularly the Kherson region, which Russia seized early in the conflict.

After Ukrainian forces’ intense shelling of clusters of Russian troops in the region, the Russians banned the movement of residents, the Ukrainian military said on Monday.

“The Ukrainian counteroffensive is making verifiable progress in the south and the east,” said the Institute for the Study of War, a Washington, DC-based think-tank.

“The pace of the counteroffensive will likely change dramatically from day to day as Ukrainian forces work to starve the Russians of necessary supplies, disrupt their command and control, and weaken their morale even as counteroffensive ground assaults continue.”

Ukrainian Telegram channels reported explosions at the Antonivsky bridge near the city of Kherson, occupied by Russian forces.

Ukrainian missiles have severely damaged the bridge over the past weeks, but Russian troops were trying to repair it or set up a pontoon crossing or barges to maintain supplies to their units.

The Russia-appointed administration of the Kherson region confirmed on Monday the bridge had been seriously damaged by Ukraine shelling and it was closed to traffic.

Plans for a referendum on Kherson joining Russia had been “paused” because of the security situation, Russian state-owned news agency TASS quoted Kirill Stremousov, deputy head of the administration, as saying.

Russian-installed officials previously suggested referendums on joining Russia would be held in September in Kherson, as well as in the neighbouring Zaporizhzhia region and the self-proclaimed Donetsk and Luhansk People’s Republics, to coincide with local elections in Russia. 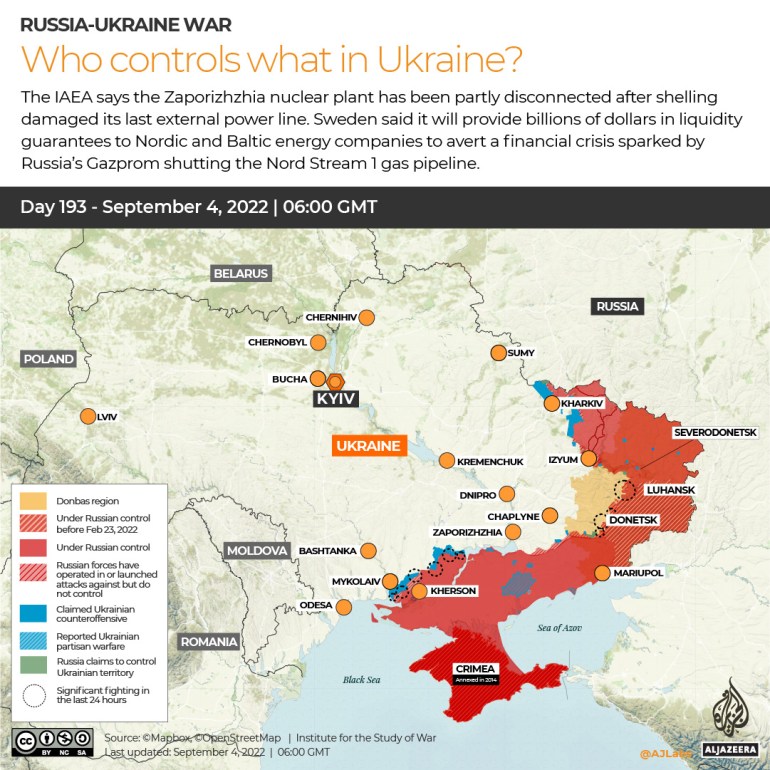 The ultimate goal of the counterattack is to retake the strategic city of Kherson, with a population of about 300,000, from the Russians – the first significant urban centre to fall after the invasion on February 24.

Taras Berezovets, a Ukraine special forces officers, told Al Jazeera the speed of the counterattack to retake Kherson depends largely on when military equipment from the West arrives.

“Currently the armed forces of Ukraine feel the lack of armoured vehicles for our infantry. We feel the lack of our air forces. We need tanks and we need artillery first of all. From this perspective, I would say any sort of counteroffensive [to retake Kherson city] would be possible after receiving all of these armaments. It will take several months at least,” said Berezovets.

Russia has launched 25 missile attacks and more than 22 air raids on military and civilian targets in Ukraine in the last 24 hours, the Ukrainian military statement added, keeping up its focus on establishing full control over the Donetsk region.

Moscow denied any military progress by Ukrainian troops during the start of the counterattack last week, saying many of Kyiv’s soldiers were killed and wounded.

It was not possible for Al Jazeera to independently confirm the claims made by either side.

Russian authorities said the situation was calm around the Russian-occupied Zaporizhzhia nuclear plant in southern Ukraine after UN inspectors said it had again lost external power.

Three strong explosions were heard in Enerhodar, the curfew-bound city where the plant is located, but there were no immediate details of damage and casualties, Russia’s official TASS news agency said on Monday.

Ukrainian troops made two attempts to deploy assault teams in the vicinity of the city, it said, adding they were using drones, heavy artillery, and rocket-launching systems.

The last main external power line was cut off, although a reserve line kept up the electricity supply to the grid, the International Atomic Energy Agency (IAEA) said. Only one of its six reactors remained in operation, it said.

Russian troops seized the plant shortly after President Vladimir Putin sent his army over the border on February 24. It has become a focal point of the conflict. Each side has blamed the other for shelling, which has raised fears of a nuclear disaster.

Vladimir Rogov, a pro-Russian official in the Zaporizhzhia region, told Komsomolskaya Pravda radio there had been no shelling or incursions, and IAEA experts were expected to work at the plant until at least Monday.