Soldiers are on the streets and heavy gunfire has been heard near the main military camp and residential areas of Burkina Faso’s capital.

A large blast also rang out on Friday near the presidential palace where soldiers took up positions.

Soldiers were seen along the main avenue leading to the presidential palace, administrative buildings and the national television station, which stopped broadcasting. Journalists said state television instead showed a blank screen saying “no video signal”.

Several main roads in Ouagadougou were blocked by troops.

The whereabouts of coup leader-turned president Paul Henri Sandaogo Damiba were not immediately known but a statement from his government on Facebook urged people to remain calm.

“Negotiations are underway to bring back calm and serenity,” said the statement attributed to the presidency spokesman. “The enemy attacking our country only wants division between Burkinabes.”

The uncertainty carried on into the late afternoon as the West African nation’s residents awaited word on who was in control of the country destabilised by a growing armed uprising.

The development bore the hallmarks of other power grabs that have swept across West and Central Africa over the past two years.

No public announcement about the motivation behind the troop movements in Ouagadougou was given.

“This smacks of a coup attempt,” Eric Humphery-Smith, senior Africa analyst at risk intelligence company Verisk Maplecroft, told The Associated Press. “While gunfire around military barracks could be due to some form of mutiny, the closure of the national television station bodes ill.”

Burkina Faso has become the epicentre of regional violence that began in neighbouring Mali in 2012 but which has since spread across the expanse of the Sahel region south of the Sahara Desert.

More than 40 percent of Burkina Faso, a former French colony, is now outside government control. In recent years, violence by armed groups has spilled over into the Ivory Coast and Togo.

Ornella Moderan, a Sahel security analyst, said a lot of rumours were flowing on social media amid the confusion of what is happening in the country.

“There has been mounting tensions among the society and the military, but it’s way too early to tell what is going on,” Moderan told Al Jazeera. “The situation is extremely complex. Burkina Faso is not confronting a security situation on its own, it’s affecting the whole region.”

Reporting from Saint Louis in Senegal, Al Jazeera’s Nicolas Haque said there was a sense of panic across Ouagadougou.

“All the streets leading to the presidential palace, the parliament, and the constitutional court are being manned by soldiers. People who have tried to approach these areas have been told to return and move away,” he said.

‘A lot of confusion’

Violence has raged in Burkina Faso since Damiba seized power in a coup in January, toppling the West African country’s elected leader.

“Late at night, around 3am, gunfire erupted in the capital as the president of transition, who took over in January, was in the presidential palace. There is no word about him nor his whereabouts,” said Haque.

“There is a lot of confusion about who is in charge and who is behind what we are seeing in Ouagadougou.”

In his first statement after the January coup, Damiba, often seen in public in military fatigues and aviator sunglasses, pledged to restore security.

The military takeover was largely celebrated by civilians fed up with former President Roch Kabore’s civilian government that was unable to rein in fighters who have killed thousands of civilians in recent years and taken over large parts of the north and east.

But attacks in the impoverished West African country have worsened and the army is in disarray. The rank and file, which gave Damiba their support in January, have grown frustrated at the lack of progress, security sources say. 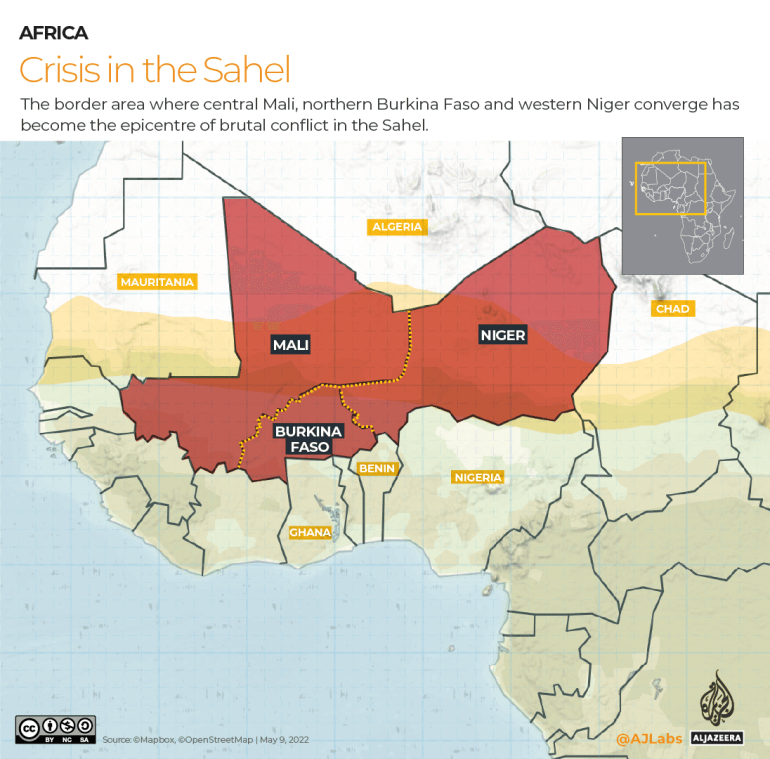 In a statement on Tuesday, the government said the assault took place on Monday in the commune of Gaskinde in Soum province, where armed groups linked to al-Qaeda and ISIL (ISIS) have escalated attacks and seized territory since 2015.

That attack was “a low point” for Damiba’s government and “likely played a role in inspiring what we’ve seen so far today”, said Humphery-Smith.

“It’s hard for the Burkinabe junta to claim that it has delivered on its promise of improving the security situation, which was its pretext for the January coup,” he added.

As in neighbouring countries, fighters affiliated with al-Qaeda and ISIL have stoked the unrest, even after Damiba earlier this month sacked his defence minister and assumed the role himself.

Much of the country became ungovernable since 2018. Millions have fled their homes, fearing further raids by gunmen who frequently descend on rural communities on motorbikes. Thousands have been killed in attacks.

As well as Burkina Faso, Mali, Chad, and Guinea have all seen coups since 2020, raising fears about a backslide towards military rule in a region that has made democratic progress in recent decades.