United Nations Secretary-General Antonio Guterres has renewed his call for the global abolition of nuclear weapons as concerns grow over Russia’s threat to use them in the Ukraine war.

“Decades after the fall of the Berlin Wall, we can hear once again the rattling of nuclear sabres,” Guterres told a special UN General Assembly session on nuclear disarmament on Monday.

“Let me be clear – the era of nuclear blackmail must end,” he said. “The idea that any country could fight and win a nuclear war is deranged. Any use of a nuclear weapon would incite a humanitarian armageddon,” he said.

“Without eliminating nuclear weapons, there can be no peace.”

Russian President Vladimir Putin in a speech last week made a thinly veiled threat to use nuclear weapons following Ukrainian forces’ recapture of land Moscow had seized in its seven-month invasion. 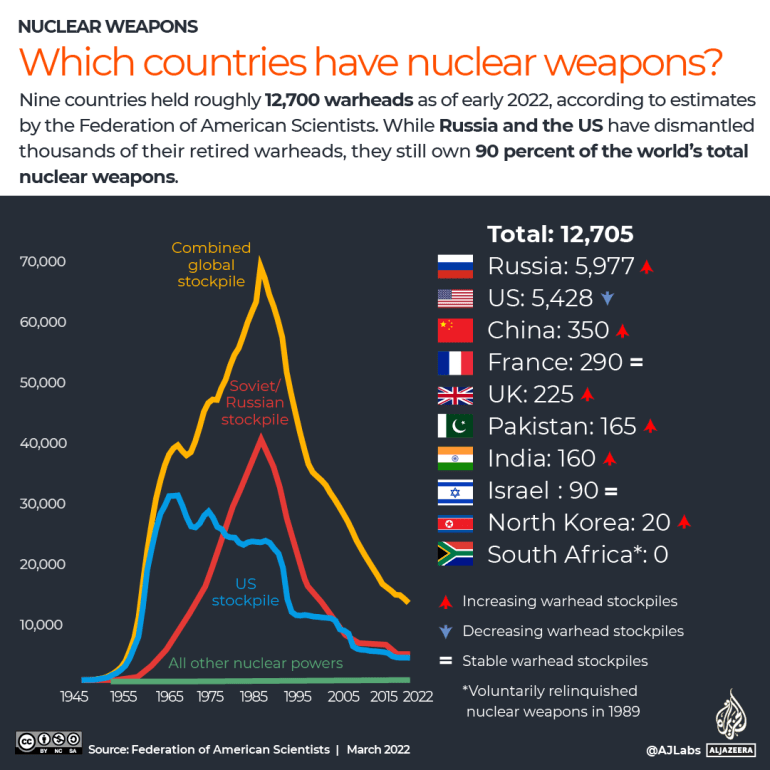 US Secretary of State Antony Blinken replied that Washington has told Moscow, including through private channels, of “catastrophic” consequences over any use of nuclear weapons.

Guterres voiced disappointment that a review conference last month of the nuclear Non-Proliferation Treaty failed to reach a consensus.

Russia blocked the outcome after the draft document backed Ukraine’s control of the Zaporizhzhia nuclear plant, whose occupation by Moscow has raised fears of a major accident.

The United States condemned Russia’s stance. But no nuclear power backed a UN treaty adopted in 2017 that called for a comprehensive prohibition of nuclear weapons, with mostly developing countries in support.

No country has used nuclear weapons on the battlefield except the US in 1945, when it destroyed the Japanese cities of Hiroshima and Nagasaki, killing more than 200,000 people. Imperial Japan surrendered days later, ending World War II.

Japanese Prime Minister Fumio Kishida, in his speech to the UN General Assembly last week, pledged to work for “a world without nuclear weapons”.