Islamabad, Pakistan – Pakistan’s Prime Minister Shehbaz Sharif says “all hell will break loose” if his flood-ravaged country is not provided with debt relief by rich nations.

In an interview with Bloomberg TV on Friday morning, Sharif sought a moratorium on Pakistan’s debt repayment from the Paris Club (a group of rich creditor countries) and others, saying there is a “yawning gap” between what is being asked for and what is available.

“We have requested (United Nations) secretary-general and European leaders to give us relief. How can the world expect us to stand on our own feet? It is simply impossible,” Sharif said in his interview, also aired on Pakistan’s state television.

There is primarily one argument I made in my interview with Bloomberg. Given the vast scale & extent of destruction caused by the floods, the rich countries should consider giving debt relief to Pakistan so that we can stand up on our feet. Climate disaster is not of our making.

Referring to a visit to the flood-hit nation by UN Secretary-General Antonio Guterres earlier this month, Sharif said: “He saw this calamity with his own eyes. He said: ‘Prime Minister, it is unbelievable’. He is a man who has been dedicating his life for humanitarian causes for many years … He said he had never seen this kind of a climatic situation in his life.”

“We are among the top 10 most vulnerable countries (to climate change),” he said.

Sharif again thanked US President Joe Biden for speaking about “Pakistan and our plight” at the United Nations General Assembly.

“Many world leaders have discussed and openly said that Pakistan needs support more than ever and this shows sincerity of these leaders. But time is running out and we are racing against time,” he said.

Sharif is in New York for the annual UNGA, which he is expected to address later on Friday. He has already met several world leaders as part of his appeal to the international community to help Pakistan as it reels from unprecedented floods.

“What the world has done is commendable but it is far from meeting our needs. We can’t do it alone,” Sharif said in the interview.

The floods in Pakistan, triggered by record monsoon rains and melting glaciers, have affected 33 million people, killed nearly 1,600 people and destroyed more than a million homes. The stagnant floodwaters have raised concerns of a “second disaster” as waterborne diseases have killed more than 300 people so far. 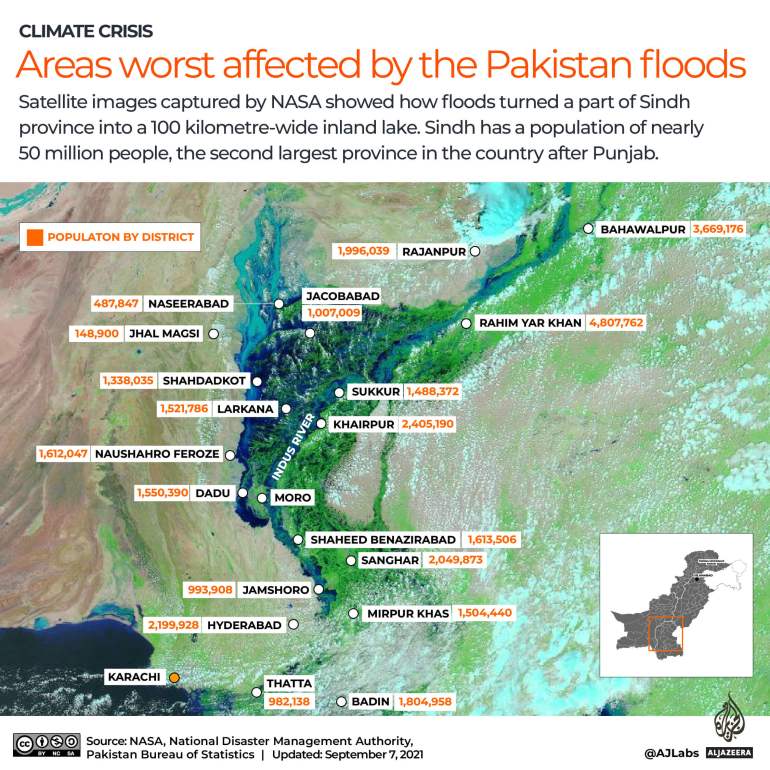 The government last month estimated the total loss at $30bn, creating concerns that Pakistan will not be able to repay $1bn in international bonds by December.

Sharif’s appeal for aid came amid a report by the Financial Times newspaper on Friday, which said the UN Development Programme (UNDP) has prepared a memo suggesting Pakistan should suspend its international debt repayments and restructure loans in the aftermath of the catastrophic floods.

However, a top finance ministry official in Pakistan, requesting anonymity, rejected the report, telling Al Jazeera that “no such proposal is on the table as yet”.

Officials at Pakistan’s UNDP office did not respond to Al Jazeera queries about the memo. Questions to Pakistan’s finance ministry and other government officials also went unanswered.

Sharif, in his interview with Bloomberg TV, said he will “most definitely” request debt relief from China.

Pakistan’s debt crisis was also brought up by the UN’s Guterres on Tuesday in his opening remarks at the UNGA, where he urged global leaders to consider debt reduction mechanisms to help Pakistan.

“These (mechanisms) could have saved lives and livelihoods in Pakistan, which is drowning not only in floodwater but also in debt,” Guterres said.

Experts say there is a possibility that Pakistan’s bilateral debt will be restructured in the wake of the floods.

“This will provide some breathing space for the country as any fund allocated to debt servicing can be reallocated to public welfare and the social sector,” economist Ammar H Khan told Al Jazeera.