Rome, Italy – Loredana Longo has little time for Italy’s September 25 election. What is dominating her thoughts instead is how she will be able to pay her sky-high gas bills in the coming winter months. “The situation is catastrophic,” she said.

A teacher at a nursery school in Ciampino, on the outskirts of Rome, Longo makes 1,000 euros ($990) a month. With more than half of her salary going to a mortgage, the 48-year-old single mother of a teenage son has long struggled to make ends meet – but was always able to get by.

Now, with an energy crisis gripping Italy – and the whole of Europe – caused by Russia’s full-scale invasion of Ukraine, Longo faces difficult choices.

“I have to decide whether to put food on the table, or pay the bills,” she said. Her case is not an isolated one. According to the European Union’s statistical office, Eurostat, nearly 12 million Italians are on the brink of falling below the poverty line – meaning those whose salary is 60 percent lower than the median income.

“This segment of the population is at risk,” said Nunzia De Capite, a sociologist and researcher for Caritas, a leading Catholic charity active across the country. De Capite said that this group, at risk of joining the already 5.6-million poor in the country, include those belonging to the middle class, with small savings and daily jobs, but who are struggling to pay bills and can’t afford any economic shocks.

The war in Ukraine, combined with Italy’s huge dependency on Russian gas which accounted for 40 percent of imports, is proving the perfect unforeseen storm. The price of electricity for an average household increased by 94 percent in the first trimester this year compared with 2021, while the cost of gas jumped by 131 percent compared with the same period, data from the Italian energy regulator ARERA shows. 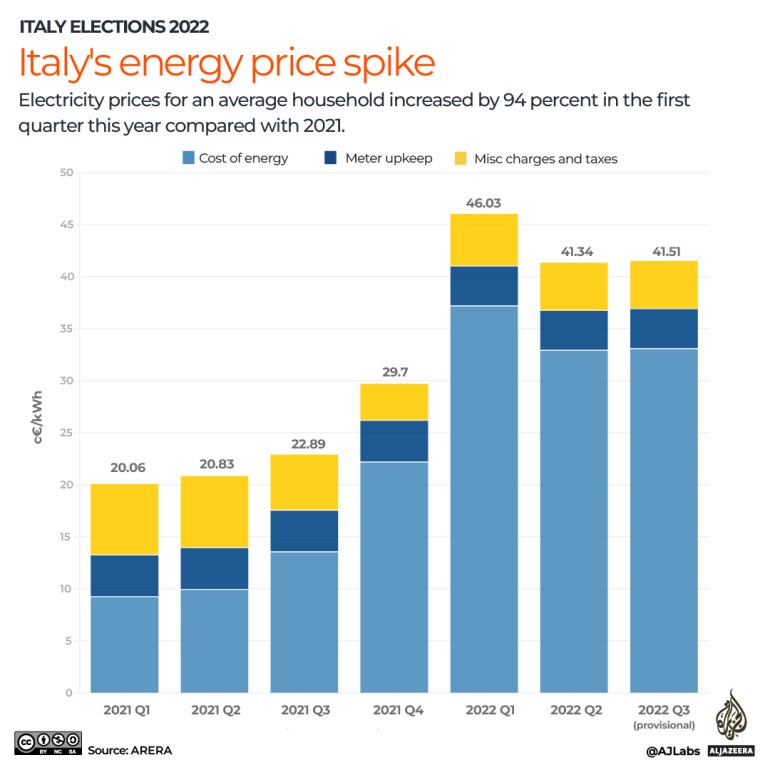 The energy crunch has significantly hurt families’ purchasing power and slowed down industrial production in what could be a worrying mix, Gianfranco Viesti, a professor of applied economics at the University of Bari, told Al Jazeera.

Inflation has climbed to nine percent, the highest in decades, hitting the most vulnerable. Studies show that low-income households spend a larger portion of their income on domestic energy costs due to less efficient housing and the use of cheaper but more energy-consuming electricity appliances.

“It is the poor who pay for this energy crisis, not the rich,” Viesti said, sounding the alarm over the risk of a social breakdown. “The number one challenge of the future government will be how to preserve social stability in a tired and discouraged country after 20 years of anaemic growth, with huge inequalities,” he said.

On the campaign trail, candidates have sparred about the best strategy to tackle the crisis.

Giorgia Meloni, the leader of the far-right Brothers of Italy whose coalition is expected to win the elections, has pledged not to increase Italy’s already record-high debt – following the monetary policy of outgoing Prime Minister Mario Draghi. Italy is the second-most indebted country in the eurozone, with the Bank of Italy recording the country’s highest debt in its history at more than 2,700 trillion euros ($2,635 trillion) this year.

“I won’t ask for more money,” she said during her closing campaign rally in Rome on Thursday. She insisted, once again, on the need to cap gas prices and decouple the price of gas and energy, two proposals that also mark a continuity with the approach of the current government.

Meloni has toned down her Euro-scepticism since the prospect of becoming prime minister became more concrete, in an attempt to reassure markets that she will not be a danger to the European Union’s stability.

But Meloni’s coalition partner, the hardline and anti-migrant chief of the League party Matteo Salvini, has been pushing for a 30-billion-euro ($29bn) state subsidy to help businesses to cap energy costs – a move that critics warn would make Italy more vulnerable to financial markets and to higher interest rates. The League was polling at nearly 13 percent, according to the latest polls on September 10, nearly half of what Meloni’s Brothers of Italy was predicted to win, suggesting that her policy proposal might prevail.

Enrico Letta, the leader of the Democratic Party, is also in favour of capping gas prices, as well as providing needy families with tools and funding to produce energy from renewable sources, increasing tax credit to compensate for a non-domestic energy price rise and to incentivise businesses to invest more in renewable energies.

But many Italians are not convinced by the options available. As the pool of people slipping into poverty has increased throughout the years, so has the number of those disenchanted with politics.

“You know what, I am going to write a poem on the voting card,” said Mauro Spadolini, age 21, while serving coffee at a bar in Rome’s working-class neighbourhood of Garbatella. Nearby, Liliana Cortellesi, the owner of a small grocery store, snaps back: “I’m gonna write Draghi across it,” the 72-year-old said, explaining she had no idea who to vote for.

They are just among the millions of people – more than 40 percent of the eligible people according to a September survey – who say they will abstain from the ballots or are still undecided about who to vote for after a chaotic electoral campaign.

Draghi’s tenure, in power since February 2021, was widely perceived as a moment of stability in Italy’s usually tumultuous politics. But it collapsed in July, becoming the latest government to fall victim to political infighting. Italy has had three governments in the last four years – seven in the last 11 – and this, experts say, has further disenfranchised the populace.

“The public opinion thinks the vote is not that useful considering what parties then do with it,” said Lorenzo Pregliasco, the founding partner of polling firm YouTrend, adding that voter turnout is expected to be the lowest in the history of Italian elections.

“My hands are trembling,” Meloni said when asked how she felt about governing during the campaign. My hands are shaking too, Longo said. But she was thinking about the upcoming winter bills.