Russia has formally announce the annexation of four partially occupied provinces of eastern and southern Ukraine.

The move on Friday came days after voters in Donetsk, Luhansk, Kherson and Zaporizhia overwhelmingly backed their provinces joining Russia, according to referendums rejected by the government in Kyiv and its Western allies as meaningless and illegal.

At a ceremony in Moscow on Friday, President Vladimir Putin said Russia has “four new regions”, calling the residents of Donetsk, Luhansk, Kherson and Zaporizhia regions “our citizens forever”.

“This is the will of millions of people,” he said in the speech before hundreds of dignitaries at the St George’s Hall of the Kremlin.

Putin had recognised the self-proclaimed Donetsk and Luhansk people’s republics in the eastern Donbas region as independent shortly before sending troops into Ukraine on February 24.

The southern Kherson region was captured by Russian troops in the early days of the invasion, as were parts of Zaporizhia.

Russia does not fully control any of the four regions. The map below shows the areas under Russian and Ukrainian control as of September 30.

Russia controls more than 90,000 square kilometres (34,750 square miles) of territory or about 15 percent of Ukraine’s total area – roughly the size of Portugal or Jordan.

Russia had annexed Crimea in 2014. With the peninsula and the territory in the four other regions, Russia would gain an area about the same size as the US state of Pennsylvania. 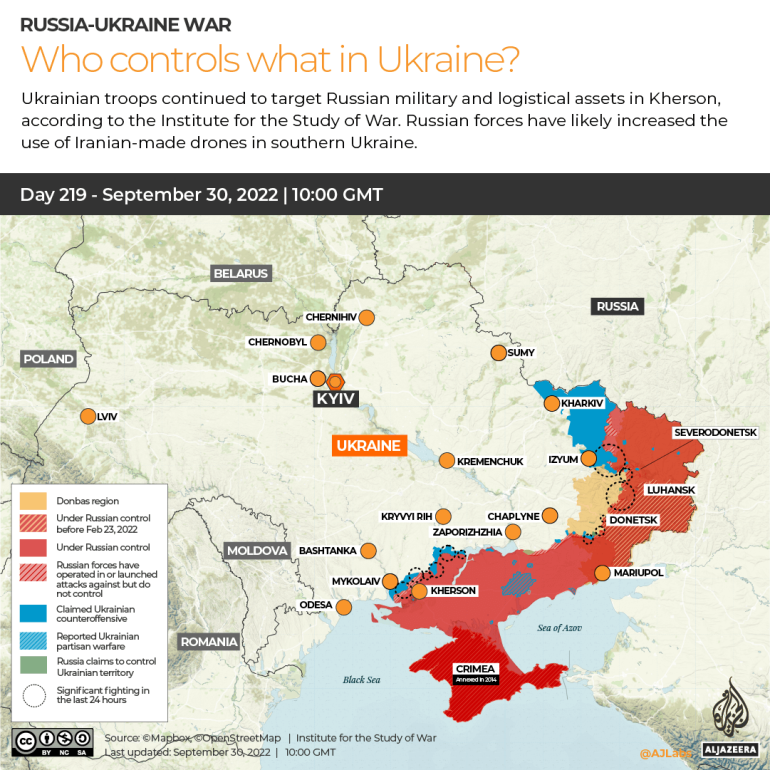 Putin has pledged to use all available means to protect the regions incorporated into Russia, hinting at the possible use of nuclear weapons to defend what he sees as his country’s territory.

Russia’s nuclear doctrine allows the use of such weapons if it is attacked with nuclear or other weapons of mass destruction, or if the Russian state faces an existential threat from conventional weapons.

The annexations also raise the risk of a direct military confrontation between Russia and the NATO military alliance whose members are supplying arms and other assistance to Ukraine.