One-way flights out of Russia are rocketing upward in price and selling out fast after President Vladimir Putin ordered the immediate call-up of 300,000 reservists to fight in Ukraine.

Putin’s announcement, made in an early-morning television address on Wednesday, raised fears that some men of fighting age would not be allowed to leave the country.

Minister of Defence Sergei Shoigu said the call-up would be limited to those with experience as professional soldiers, and that students and conscripts would not be called up.

The Kremlin declined to comment on whether the borders would be closed to those subject to the mobilisation order, and asked people to be patient as the law is clarified.

The request “to leave Russia” was searched in the morning at 100 times its usual rate, Google Trends data showed.

It also showed a spike in searches for Aviasales, Russia’s most popular flight-booking site.

Direct flights from Moscow to Istanbul in Turkey and Yerevan in Armenia, both destinations that allow Russians to enter without a visa, were sold out on Wednesday, according to Aviasales data.

Flights from Moscow to Istanbul via Turkish Airlines were either all booked or unavailable until Sunday, as of 14:15 Moscow time (11:15 GMT).

Some routes with stopovers, including those from Moscow to Tbilisi, the capital of Georgia, were also unavailable, while the cheapest flights to Dubai cost more than 300,000 roubles ($5,000) – about five times the average monthly wage.

Turkish Airlines, meanwhile, said on its website that flights to Istanbul, which has become an important travel hub to and from Russia, were fully booked until Saturday.

The next available AirSerbia flight to Belgrade was posted for September 26. 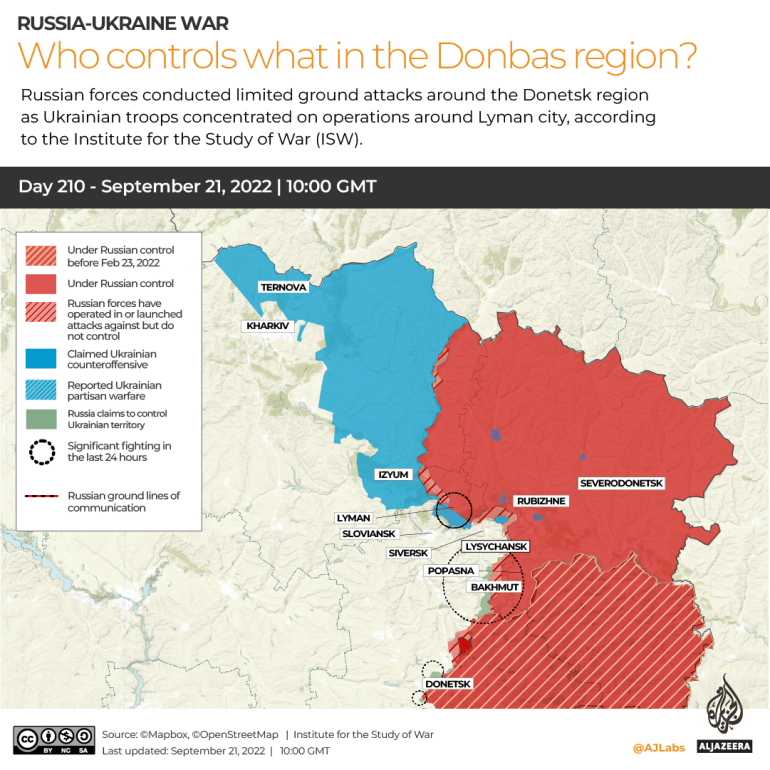 The head of Russia’s tourism agency said no restrictions have been imposed on travelling abroad so far.

Aeroflot, the country’s flag-carrying airline, said it was not limiting ticket sales.

Flights between Russia and the European Union were closed after Putin launched what the Kremlin calls Moscow’s “special military operation” in Ukraine.

The onset of fighting sparked concerns among Russians that martial law could be imposed and saw an exodus of tens of thousands of people to countries neighbouring Russia.

In his speech on Wednesday, Putin said his promise to use all military means in Ukraine was “no bluff” and hinted that Moscow was prepared to use nuclear weapons.

His mobilisation call came as Moscow-held regions of Ukraine prepared to hold annexation referendums this week, dramatically upping the stakes in the seven-month conflict by allowing Moscow to accuse Ukraine of attacking Russian territory.