Fiona has strengthened into a category 4 hurricane as it moves away from the Turks and Caicos Islands towards Bermuda, the US National Hurricane Center (NHC) said.

A category 4 hurricane is the second highest level on the Saffir-Simpson scale.

Eric Blake, acting branch chief for the NHC in Miami, said Bermuda would see high surf, storm surges, heavy rainfall and powerful winds even if Fiona kept on its current path and passed to the west of the island.

Bermuda will see the worst of the storm by late Thursday, the NHC said.

“Hopefully, the core of the storm will stay west, but it could still jog east and hit Bermuda,” Blake said, adding that the US East Coast would experience large swells and rip currents as the storm churns towards Canada. 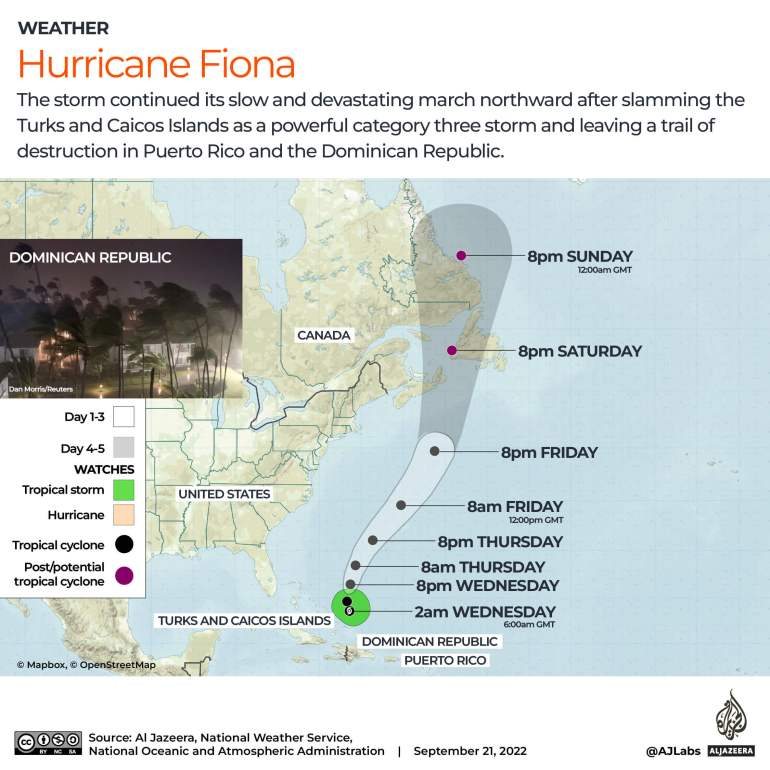 Fiona slammed the Turks and Caicos Islands on Tuesday after leaving a trail of destruction in Puerto Rico and the Dominican Republic and killing at least four people.

“Hurricane Fiona has proven to be an unpredictable storm,” Anya Williams, the deputy governor of the Turks and Caicos Islands, said in a broadcast.

Williams said no casualties or serious injuries had been reported on Turks and Caicos, but she urged residents to continue to shelter in place.

Blackouts were reported on Grand Turk and several other islands in the archipelago and 165 people were admitted to shelters, she said, adding that Britain’s Royal Navy and the United States Coast Guard are standing by to assist.

US President Joe Biden on Sunday declared a state of emergency in Puerto Rico and dispatched the head of the Federal Emergency Management Agency to the island, which is still struggling to recover from Hurricane Maria five years ago.

“We are sending hundreds of additional personnel to support all affected communities,” FEMA Administrator Deanne Criswell said on Tuesday after a tour with Pedro Pierluisi, the island’s governor.

Pierluisi said the storm had caused catastrophic damage on the island of three million people since Sunday, with some areas receiving more than 30 inches (760mm) of rain.

Power company officials initially said it would take a few days for electricity to be fully restored, but then appeared to backtrack late Tuesday night. Only 26 percent of customers had power as of Wednesday, three days after it hit the island.

Piped water service was initially knocked out for most of the Island’s users due to lack of power and turbid water at filtration plants, but about 60 percent had service on Wednesday.

After years of financial woes and recession, Puerto Rico in 2017 declared the largest bankruptcy ever by a local US administration.

Later that year, the double hit from hurricanes Irma and Maria added to the misery, devastating the electrical grid on the island – which has suffered from major infrastructure problems for years.

The grid was privatised in June 2021 in an effort to resolve the problem of blackouts, but the issue has persisted, and the entire island lost power earlier this year.