Residents have been ordered to take shelter on the Turks and Caicos Islands as an increasingly powerful Hurricane Fiona brought heavy rains and the threat of flash flooding to the Caribbean archipelago.

The strengthening category two storm, predicted to become a category three event by Tuesday afternoon with winds exceeding 111mph (178km/h), was on track to pass close to the eastern end of the islands on Tuesday evening, before heading for the southern Bahamas.

“Hurricane Fiona has proven to be an unpredictable storm,” Anya Williams, the deputy governor of the territory, said in a broadcast.

Fiona is on course to become the first “major hurricane” of the 2022 season if it becomes a category three storm, according to the United States National Hurricane Center (NHC).

Williams said no casualties or serious injuries had been reported on Turks and Caicos overnight as heavy rain and strong winds lashed the islands but she urged residents to continue to shelter in place.

Blackouts had been reported on Grand Turk and several other islands in the archipelago and 165 people had been admitted to shelters, she said, adding that Britain’s Royal Navy and the US Coast Guard are standing by provide assistance if needed.

The Turks and Caicos Islands are a British overseas territory with 40 low-lying coral islands and a population of about 40,000 that sits about 1,126km (700 miles) southeast of the US state of Florida.

Fiona dumped torrential rain on the Dominican Republic and left one person there dead on Monday after triggering major flooding in Puerto Rico.

On Tuesday, US officials said four people had been killed across the US territory, which is also experiencing widespread power outages. A fifth person was killed in Guadeloupe earlier in the week.

The NHC said in its latest advisory for Turks and Caicos that heavy rains near the centre of Fiona were expected through Tuesday afternoon, along with “life-threatening flooding”.

“All persons are to remain indoors at their residence, place of safety or where they seek shelter until the NEOC issues NATIONAL ALL CLEAR”, the agency told residents of Grand Turk, South Caicos and Salt Cay.

People were stocking up on food and water while shelters were being prepared. Foreign governments issued travel alerts for the islands, a popular tourist destination.

“Storms are unpredictable,” Premier Washington Misick said in a statement from London, where he was attending the funeral of Queen Elizabeth II. “You must therefore take every precaution to ensure your safety.” Misick was scheduled to return home on Thursday.

Similar preparations were under way in the eastern Bahamas, which Fiona is on track to hit on Wednesday when it could be at category four strength.

In Puerto Rico, residents were still facing strong winds, frequent lightning and heavy rain on Monday. Fiona made landfall in the US territory on Sunday afternoon, dumping up to 30 inches (76.2cm) of rain in some areas.

Puerto Rico Governor Pedro Pierluisi has warned it could take days before everyone has electricity. Water service was cut to more than 837,000 customers – two-thirds of the total on the island – because of turbid water at filtration plants or lack of power, officials said.

The storm comes five years after Puerto Rico was ravaged by Hurricane Maria, which triggered the worst power blackout in its history and killed 3,000.

National Guard Brigadier General Narciso Cruz described the flooding from Fiona as historic. “There were communities that flooded in the storm that didn’t flood under Maria,” he said. “I’ve never seen anything like this.”

Cruz said 670 people have been rescued in Puerto Rico, including 19 people at a retirement home in the northern mountain town of Cayey that was in danger of collapsing. “The rivers broke their banks and blanketed communities,” he said.

Some people were rescued via kayaks and boats while others nestled into the massive shovel of a digger and were lifted to higher ground.

US President Joe Biden spoke with Puerto Rico Governor Pedro Pierluisi on Monday, promising to increase the support personnel sent to the island over the next few days. The Federal Emergency Management Agency (FEMA) Administrator Deanne Criswell will travel there on Tuesday. 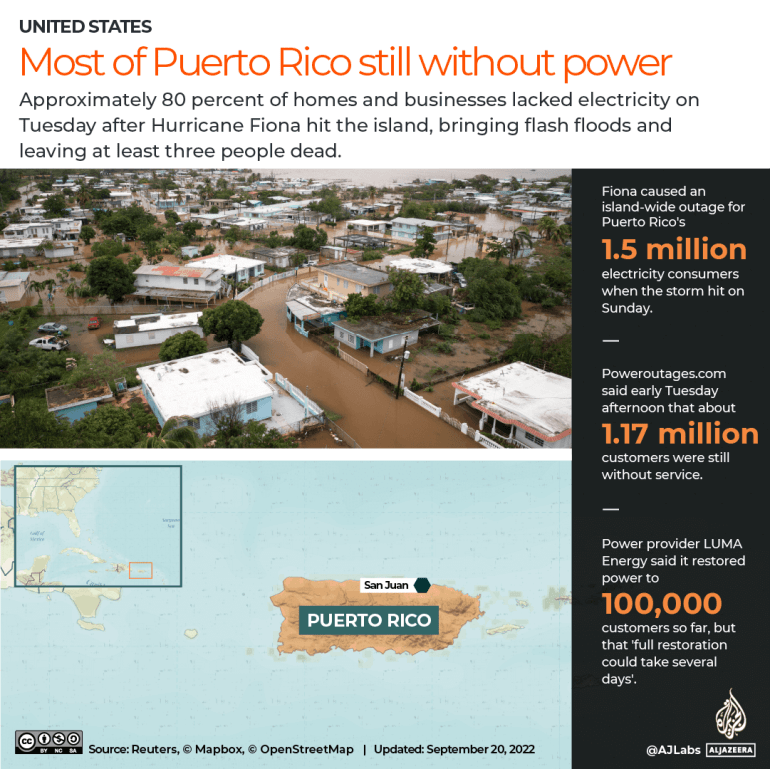