Russian President Vladimir Putin pledged to stay the course in his campaign against Ukraine, warning if counterattacks continue a “more serious” military response will be unleashed.

Putin remained steadfast despite strong evidence that his forces incurred heavy losses in the Ukraine counteroffensive this month.

The Russian leader said the main goal of the campaign continues to be “the liberation of the entire territory of Donbas” – the areas of eastern Ukraine including Donetsk and Luhansk that are largely Russian speaking.

“The plan is not subject to adjustment,” Putin said. “Our offensive operations in Donbas itself do not stop. They are going at a slow pace … The Russian army is occupying newer and newer territories.”

He accused Ukrainian forces of attempts to carry out “terrorist acts” and causing damage to Russian civilian infrastructure.

“We are really quite restrained in our response to this for the time being,” Putin said at a news conference on Friday. “If the situation continues to develop in this way, the response will be more serious.” 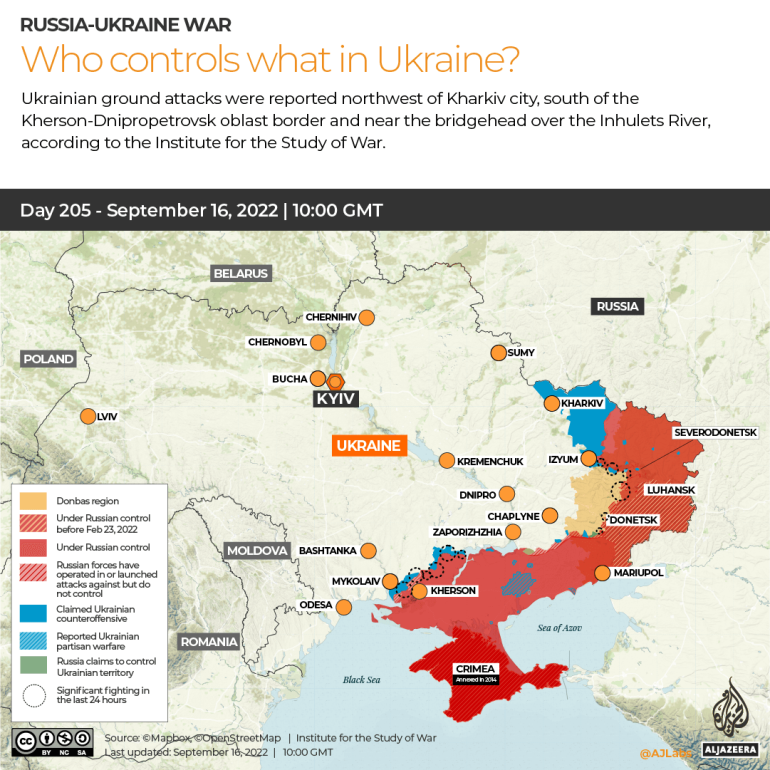 Meanwhile, German Chancellor Olaf Scholz spoke to Putin on the phone on Tuesday after a break of several months. According to the German government, the conversation lasted 90 minutes.

“The Russian president is pursuing his imperialist goal of annexing part of the neighbouring territory,” Scholz told German broadcaster Deutschlandfunk.

Scholz insisted on a diplomatic solution to the war in Ukraine, telling Putin it had to include a ceasefire, a complete withdrawal of Russian troops, and respect for the territorial sovereignty of Ukraine.

German weapons have helped make “the difference and made possible the successes, the current successes, that Ukraine is recording”, he added.

Scholz said there had “definitely been movement” in Putin’s tone about the war but it was not significant.

Russian forces are setting up a new defensive line in Ukraine’s northeast after Kyiv’s troops broke through the previous one, defence officials and analysts said on Saturday.

The new line of defence is likely between the Oskil River and Svatove, 150km (90 miles) southeast of Kharkiv, Ukraine’s second-largest city, the UK defence ministry said in an intelligence brief.

The front-line readjustment comes after a Ukrainian counteroffensive punched a hole through the previous one in the war and recaptured large swaths of land in the northeastern Kharkiv region that borders Russia.

Moscow “likely sees maintaining control of this zone as important because it is transited by one of the few main resupply routes Russia still controls from the Belgorod region of Russia”, the British military said.

“A stubborn defence of this area” was likely but it remained unclear whether the Russians would be able to withstand another concerted Ukrainian assault, it said.

Ukrainian forces continue to cross the key Oskil River in the Kharkiv region as they try to press on in a counteroffensive targeting Russian-occupied territory, according to the Washington-based Institute for the Study of War.

The institute said in its Saturday report that satellite imagery it examined suggests Ukrainian forces have crossed over to the east bank of the Oskil in Kupiansk, placing artillery there. The river, which flows south from Russia into Ukraine, had been a natural break in the newly emerged front lines since Ukraine launched its push about a week ago.

Videos circulating online on Saturday indicated that Ukrainian forces are also continuing to take land in the country’s embattled east.

One video showed a Ukrainian soldier walking past a building, its roof destroyed, then pointing up over his shoulder at a colleague hanging the blue-and-yellow Ukrainian flag over a mobile phone tower. The soldier in the video identified the seized village as Dibrova, just northeast of the city of Sloviansk and southeast of the embattled city of Lyman in Ukraine’s Donetsk region.

Another online video showed two Ukrainian soldiers in what appeared to be a bell tower. A Ukrainian flag hung as a soldier said they had taken the village of Shchurove, just northeast of Sloviansk.

Elsewhere in Ukraine, Russian forces continued to pound cities and villages with missile strikes and shelling. 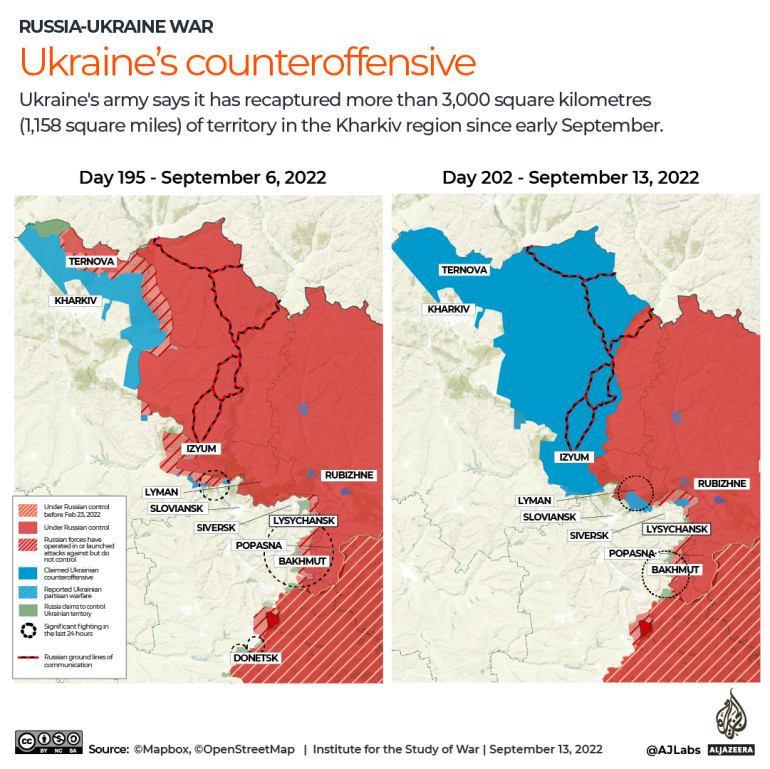 ‘Closer to victory and peace’

Western military aid to Ukraine has been crucial in its fight against Russia’s invasion, and the political will to keep sending it must not falter, said Estonian Prime Minister Kaja Kallas on Saturday at a NATO Military Committee meeting.

“The ongoing counteroffensive proves that military aid takes Ukraine closer to victory and peace. Our focus must be scaling up our aid and weapons deliveries to push back the Russian aggression as soon as possible,” Kallas said in a speech.

“We are all in awe of the immense courage of the Ukrainian armed forces and the Ukrainian people who outmanoeuvre their opponent time and time again … Winter is coming but our support shall remain unwavering. It is crystal clear in that this conflict is bigger than Ukraine. The entire international rules-based order is under attack,” said Bauer.