Ukrainian President Volodymyr Zelenskyy says a reservoir dam has been hit by Russian air raids in his hometown as officials urge residents in the area to evacuate.

Kryvyi Rih, the largest city in central Ukraine with an estimated pre-war population of 650,000, was hit by eight cruise missiles on Wednesday, officials said.

The strikes hit the Karachunov reservoir dam, Zelenskyy said in a video address released early on Thursday, calling Russia a “terrorist state”. The water system had “no military value” and hundreds of thousands of civilians depend on it daily, he said.

“In order to avoid unnecessary risks, I kindly ask the residents of certain streets to evacuate,” the head of the Kryvyi Rih military administration, Oleksandr Vilkul, said in a statement.

In a post on Telegram, Vilkul said 112 homes were flooded, and works to repair the dam on the Inhulets river were under way and that “flooding was receding”.

Kirill Timoshenko, the deputy head of the president’s office, said in an online post that there had been no civilian casualties in the attack.

Reporting from Kyiv, Al Jazeera’s Gabriel Elizondo said emergency crews are working in Kryvyi Rih to mitigate the damage. “This was a strike that clearly caused significant damage to the dam,” he said.

“It is unclear exactly why the Russians would want to target the dam. But perhaps it is because it is the hometown of Zelenskyy,” he added. 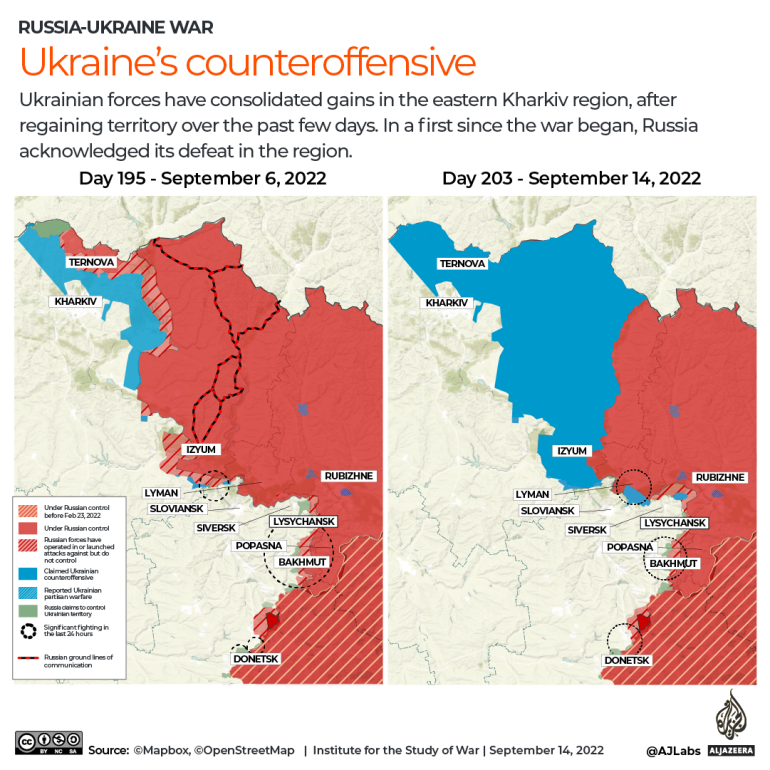 Russian forces have suffered a stunning reversal this month after Ukrainian troops made a rapid armoured thrust in the Kharkiv region in its northeast, forcing a rushed Russian withdrawal.

Ukraine says it has seized some 8,000 square kilometres (4,970 square miles) of territory in the country since the beginning of September.

However, Russia said on Wednesday its forces were hitting back in areas taken back by Ukraine in Kharkiv with “massive strikes”, claiming losses to Ukrainian military servicemen and hardware.

Russia also said it had captured dozens of Ukrainian soldiers in the southern Kherson and Zaporizhia regions.

The United States, which has provided billions of dollars of weapons and support, said it was likely to announce more military aid for Ukraine in the “coming days”.

Meanwhile, Russian President Vladimir Putin and his Chinese counterpart Xi Jinping are set to discuss Ukraine at a meeting in Uzbekistan on Thursday which the Kremlin said would hold “special significance”.

Also on the diplomatic front, the United Nations General Assembly is on Friday due to consider a proposal for Zelenskyy to address the annual gathering of leaders next week with a pre-recorded video. Russia is opposed to Zelenskyy speaking.