Ukraine’s President Volodymyr Zelenskyy has said his forces have recaptured 6,000sq km (2,320sq miles) of territory from Russia in a counteroffensive this month, marking Moscow’s worst defeat in the near seven-month-old war.

“Since the start of September, our soldiers have already liberated 6,000 square kilometres of Ukrainian territory in the east and south, and we are moving further,” Zelenskyy said in his daily address on Monday.

Ukrainian troops made more gains on Monday, pushing all the way to the northeastern border in some places, and claiming to have captured many Russian soldiers as part of a lightning advance that forced Moscow to make a hasty retreat.

“In some areas of the front, our defenders reached the state border with the Russian Federation,” said Oleh Synyehubov, governor of the northeastern Kharkiv region.

A spokesperson for Ukrainian military intelligence said Russian troops were surrendering en masse as “they understand the hopelessness of their situation.” A Ukrainian presidential adviser said there were so many prisoners of war (POWs) that the country was running out of space to accommodate them.

US Secretary of State Antony Blinken said on Monday that while it was still early days in the counteroffensive, Ukrainian forces had made “significant progress.”

“What they have done is very methodically planned out and of course it’s benefited from significant support from the United States and many other countries in terms of making sure that Ukraine has in its hands the equipment it needs to prosecute this counteroffensive,” Blinken said during a news conference in Mexico.

As blue-and-yellow Ukrainian flags fluttered over newly liberated towns, the Ukrainian military said it had freed more than 20 settlements in 24 hours.

In recent days, Kyiv’s forces have captured territory at least twice the size of greater London, according to the British Defence Ministry.

The territorial shifts marked one of Russia’s biggest reversals since its troops were turned back from Kyiv in the earliest days of its invasion on February 24.

After months of little discernible movement on the battlefield, the momentum has lifted Ukrainian morale and provoked rare public criticism of Russian President Vladimir Putin’s war.

Ramzan Kadyrov, the Moscow-backed leader of the Russian region of Chechnya, publicly criticised the Russian Defence Ministry for what he called “mistakes” that made the Ukrainian blitz possible.

Sergey Markov, a former adviser to Putin and director of the Institute of Political Studies, said the Russian army should change strategy.

“On one hand Russia did not give information over this failure because in Russia we had three days of regional elections and the power is not interested in giving negative information to citizens,” Markov said.

“But on the other hand it’s a clear failure and Russia should change strategy. Many analysts here believe that Russia has to escalate its military operation in Ukraine … Russia’s military activities were too polite, too modest,” he added.

Moscow conceded having lost territory — which experts saw as a serious blow to its war ambitions — but Kremlin spokesperson Dmitry Peskov saw no prospects for negotiations.

“The special military operation continues and will continue until the objectives that were originally set are achieved,” he added, using Russia’s terminology for the internationally-condemned war. 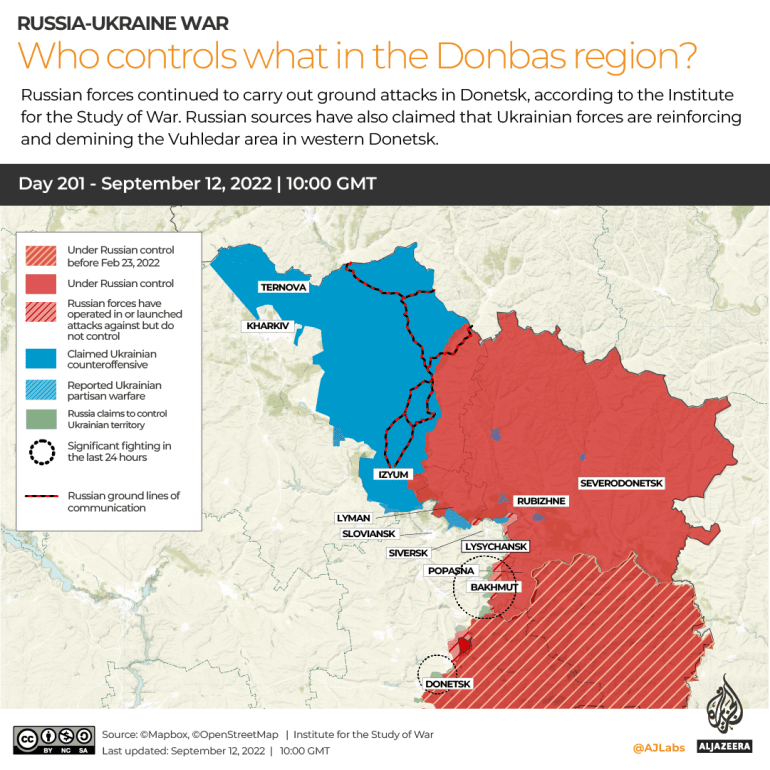 Kyiv announced the recapture of Izyum in the country’s east on Sunday.

It was not yet clear if the Ukrainian blitz could signal a turning point in the war. Momentum has switched back and forth before, but rarely with such a big and sudden swing.

Ukrainian Defence Minister Oleksii Reznikov told French daily Le Monde, in an interview published on Monday, that the war has entered a new phase with the help of Western weapons.

Meanwhile, the UN atomic watchdog said on Monday that Kyiv and Moscow have shown “signs that they are interested” in creating a security zone around the Zaporizhzhia nuclear power plant.

But later in the day, spokesperson for Ukraine’s foreign ministry Oleg Nikolenko said the only way to “ensure the nuclear safety and security of the Zaporizhzhia power plant is its de-occupation, demilitarisation and return to Ukrainian control”.

Russia, which seized control of the complex early soon after its invasion, has so far rejected the proposal to demilitarise the site of Europe’s largest nuclear power plant.

The speed of Ukraine’s fightback has apparently caught Russia’s military off-guard, bringing swathes of territory Moscow had controlled for months back into Kyiv’s fold.

Images posted by the Ukrainian military showed crates of munitions and military hardware scattered across territory abandoned by Russian forces.

Around the town of Balakliia, AFP news agency journalists saw evidence of fierce battles, with buildings destroyed or damaged and streets mostly deserted.

Ukrainian authorities also claimed to have found four bodies of civilians with “signs of torture” in the recaptured village of Zaliznychne.

The mood was jubilant across the country.

“We heard the Ukrainians are advancing towards the border and that in some parts they have reached it, but more than that we can tell you that the mood is very upbeat,” Al Jazeera’s Hoda Abdel-Hamid, reporting from Kharkiv, said. “It was a huge success for them.”

The retreat of Russian troops in recent days has drawn weeping and relieved locals into bomb-cratered streets, including on Sunday in the strategic but heavily damaged town of Izyum.

“It’s not enough to say I’m happy. I just don’t have enough words to express myself,” said Yuriy Kurochka, 64.

In Kharkiv, the capital of the region where the gains have been made, authorities said power and water had been restored to about 80 percent of the region’s population following the widespread outages.

“You are heroes!!!” Kharkiv Mayor Ihor Terekhov wrote on Telegram, referring to teams who restored utilities in Ukraine’s second-biggest city. “Thanks to everyone who did everything possible on this most difficult night for Kharkiv to normalise the life of the city as soon as possible.”

The buoyant mood was also captured by a defiant President Zelenskyy late on Sunday on social media.

“Do you still think you can intimidate, break us, force us to make concessions?” Zelenskyy asked. “Cold, hunger, darkness and thirst for us are not as scary and deadly as your ‘friendship’ and brotherhood.”

In the end, he exclaimed: “We will be with gas, lights, water and food … and WITHOUT you!”