The United States Geological Survey said the earthquake struck at a depth of 61km (38 miles), about 67km (41 miles) from the eastern town of Kainantu, on Sunday morning.

“There has been widespread damage,” said Sawang, adding a landslide had buried homes and “split” one village where people “lost their houses”.

The nation’s leader, James Marape, said the earthquake was “massive” and told people to be cautious, but said he expected the damage to be less than that from a 2018 earthquake and series of aftershocks, which killed an estimated 150 people.

However, the scale of the damage and number of casualties from Sunday’s earthquake was still unclear.

“National and provincial disaster agencies, as well as leaders, have been asked to assess the damage and injuries to people and attend to these as soon as possible,” Marape said.

The United Nations Office for the Coordination of Humanitarian Affairs (OCHA) in Asia and the Pacific said in a report posted on Twitter that at that least four deaths and four injuries had been reported.

It said people had been injured by falling structures or debris, and there was damage to some health centres, homes, rural roads and highways.

Power infrastructure was damaged in affected areas, causing an outage across the Eastern Highlands.

Video of damage to a university in the eastern highland town of Goroka showed large cracks appearing in walls and window awnings falling during the earthquake.

Small aviation companies and missionary groups were involved in airlifting some of the injured across the rugged jungle landscape.

“It’s very difficult, the terrain, the weather. It’s challenging,” said Nellie Pumai of Manolos Aviation, which had transported one person out and was trying to return. 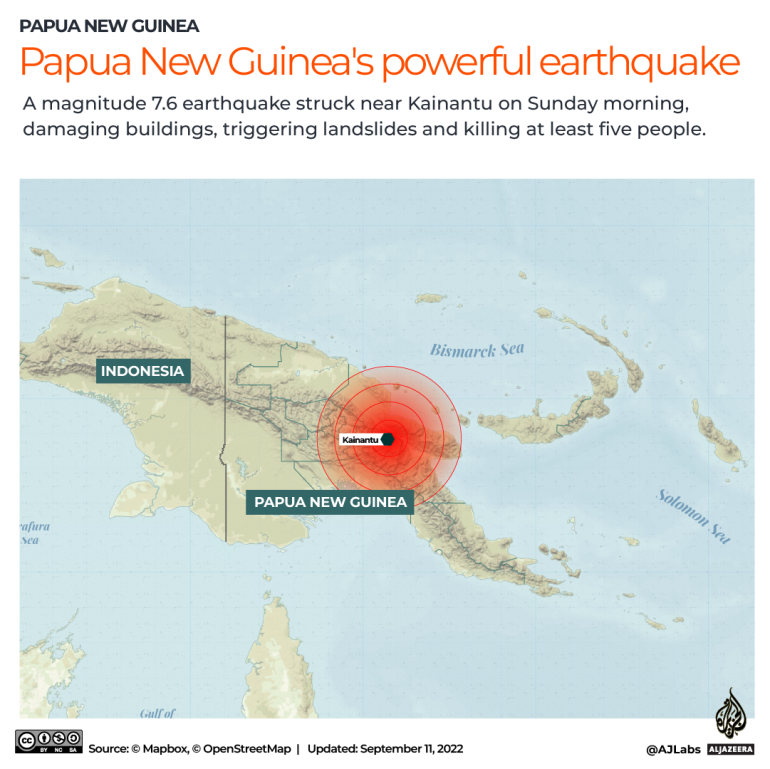 Locals in Lae and Madang, closest to the epicentre, said the shaking was much more vigorous than previous quakes.

“Very strong, everything was like sitting on a sea – just floating,” said Hivi Apokore, a worker at the Jais Aben Resort near Madang.

Earthquakes are common in Papua New Guinea, which sits on the Pacific Ocean’s “Ring of Fire”, a hotspot for seismic activity due to friction between tectonic plates.

A magnitude 7.5 earthquake rocked the country’s remote mountainous highlands in 2018, killing more than 100 people and damaging thousands of homes.

In neighbouring Indonesia in 2004, a 9.1 magnitude earthquake triggered a tsunami that killed 220,000 throughout the region.