United Nations Secretary-General Antonio Guterres, who is visiting flood-ravaged Pakistan, says he has “never seen climate carnage” on such a scale, blaming wealthier countries for contributing to the devastation.

Nearly 1,400 people have died and more than a million people have been rendered homeless in flooding that has submerged nearly one-third of Pakistan and destroyed crops in a country that has been facing high inflation and a balance of payment crisis.

“I have seen many humanitarian disasters in the world, but I have never seen climate carnage on this scale,” Guterres said on Saturday in the port city of Karachi on his second day of a visit in Pakistan.

“I have simply no words to describe what I have seen today,” he said.

More than a third of Pakistan was submerged by melting glaciers and record monsoon rains that began in June, causing colossal damage to homes, roads, bridges, rail networks, livestock and crops.

While Minister of Finance Miftah Ismail estimated the total loss at $10bn amid a continuing economic crisis, independent analysts put the figure between $15bn and $20bn, and fear it could further rise.

Guterres has said he hopes his visit will galvanise support for Pakistan, which has put the provisional cost of the catastrophe at more than $30bn, according to the government’s flood relief centre. Shortly after his arrival on Friday, the UN chief called for “massive” global support.

The devastating floods have also caused significant damage to Mohenjo Daro, a famous 4,500-year-old archaeological site in the southeastern Sindh province which UNESCO has designated a World Heritage site.

Reporting from the site, Al Jazeera’s Zein Basravi said that while the rain spared the main structure, the conservation work that had been done in the past years was damaged.

“The visit by the UN team here is meant to illustrate a very clear picture, the important point here is that the human suffering is obvious and unparalleled and you can’t compare the loss of life to what is happening here, at the same time this is an existential threat: Climate change is now beginning to wash away human history as well,” Basravi said. 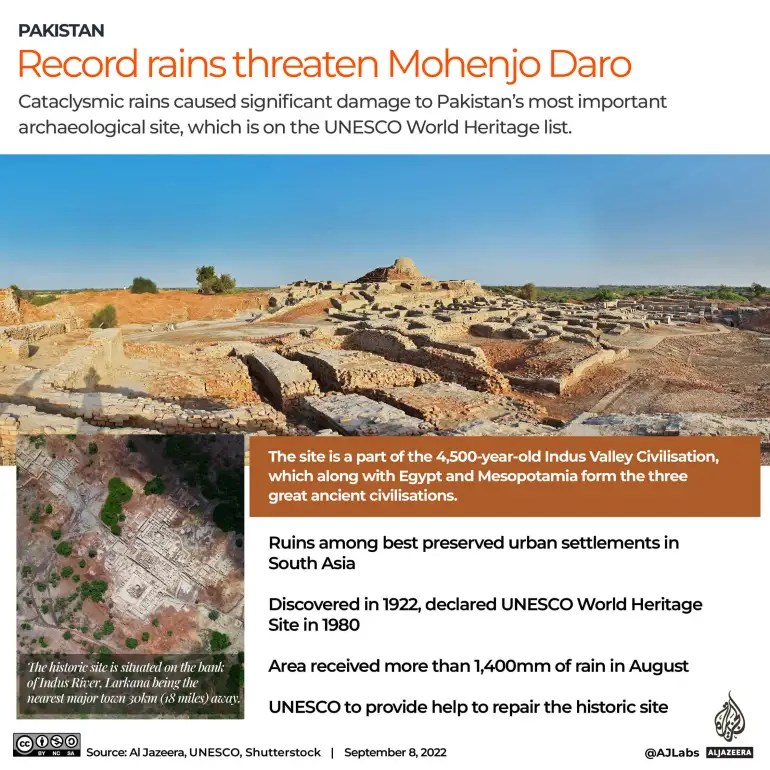 ‘This is insanity, this is collective suicide’

Pakistan receives heavy, often destructive, rains during its annual monsoon season, which is crucial for agriculture and water supplies. But downpours as intense as this year’s have not been seen for decades, while rapidly melting glaciers in the north have for months heaped additional pressure on waterways.

“Wealthier countries are morally responsible for helping developing countries like Pakistan to recover from disasters like this, and to adapt to build resilience to climate impacts that unfortunately will be repeated in the future,” Guterres said, adding that G20 nations cause 80 percent of today’s emissions.

Pakistan is responsible for less than 1 percent of global greenhouse gas emissions, but is eighth on a list compiled by the NGO Germanwatch of countries most vulnerable to extreme weather caused by climate change.

Guterres has lamented the lack of attention the world has given to climate change, particularly from industrialised nations, “This is insanity, this is collective suicide,” he said after arriving in Pakistan on Friday.

The effect of the torrential rain has been twofold – destructive flash floods in rivers in the mountainous north, and a slow accumulation of water in the southern plains.

The meteorological office said Pakistan has received five times more rain than normal in 2022. Padidan, a small town in Sindh province, has been drenched by more than 1.8 metres (71 inches) since the monsoon began in June.