Islamabad, Pakistan – Large swaths of Pakistan were inundated in 2010 by “super-floods”, resulting in the displacement of more than 20 million people. Experts called it one of the worst humanitarian disasters the country ever suffered.

Pakistan’s weather department has warned there might be more rain to come this month.

The government declared a national emergency and has desperately sought urgent aid from the international community, already suffering from donor fatigue.

While the UN promised $160m and other countries pledged aid, government officials say the floods have inflicted an estimated “loss of at least $10bn”. 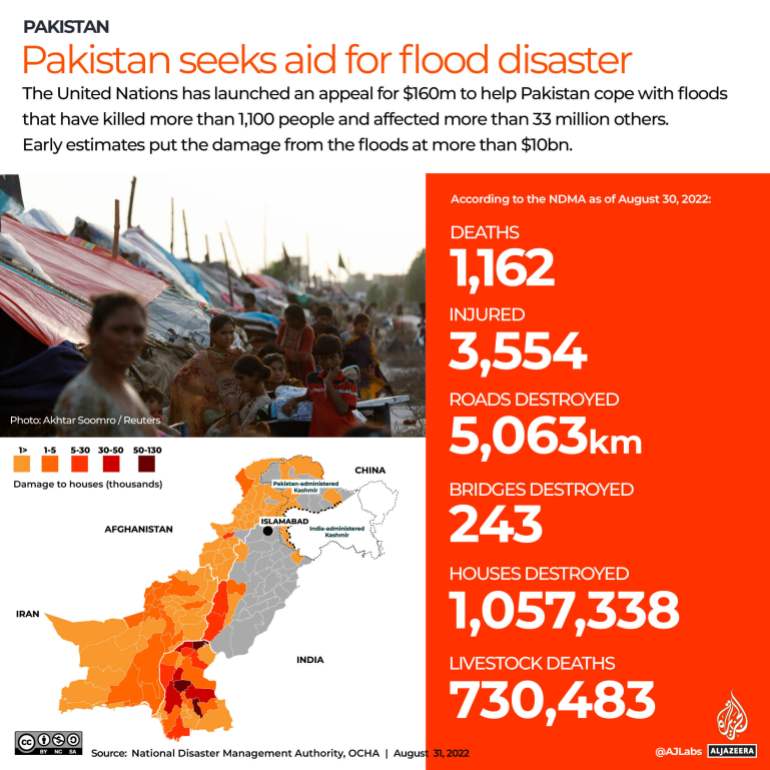 What is the extent of damage?

The South Asian nation of more than 220 million people faces what is arguably its greatest humanitarian crisis. By the end of August, close to 1,200 people have died since the monsoon rains started in mid-June.

More than one-third of the country is still submerged and at least 33 million people are affected. The National Disaster Management Authority (NDMA) puts the number of affected districts at 72 out of a total 160.

The NDMA estimates damage to more than 5,000km (3,100 miles) of roads, 10 million houses partially or fully destroyed, and the death of 700,000 livestock, often people’s only livelihood.

The southern province of Sindh remains the worst affected. As of August 30, NDMA said at least 405 people, including 160 children, died there. More than 14 million people in the province are “badly affected”, of which only 377,000 are living in camps right now.

The southwestern province of Balochistan – Pakistan’s largest by area but also the most impoverished – is also reeling. More than nine million people were forced to leave their homes, but only 7,000 have been provided accommodation in camps. 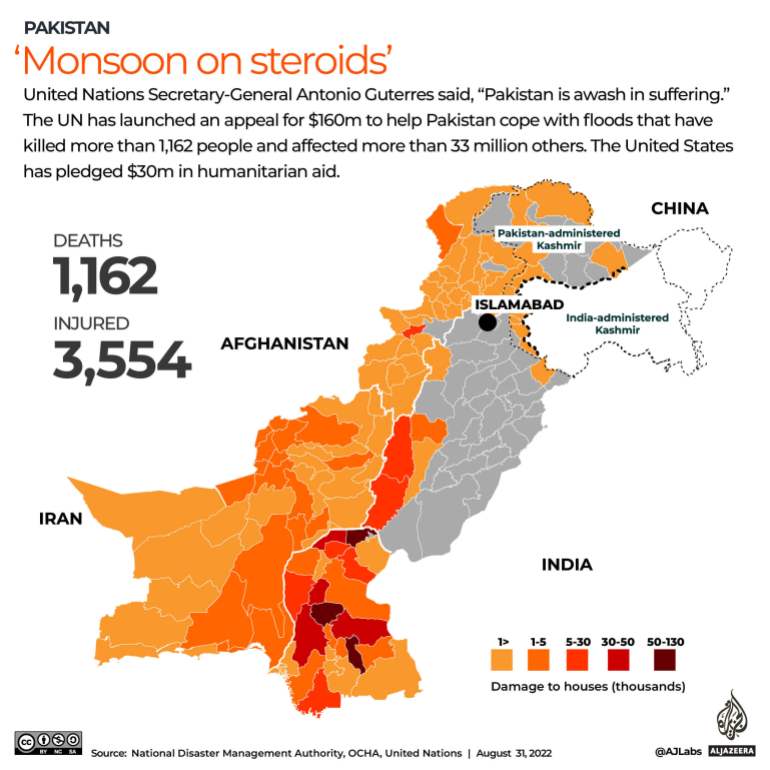 What caused the floods?

The Global Climate Risk Index puts Pakistan as the eighth most vulnerable country because of disasters caused by climate change, yet the country is responsible for less than 1 percent of the world’s planet-warming gases.

Extreme weather conditions have left the country precariously placed, where weather patterns are no longer predictable.

Earlier this year, the country faced unprecedented heatwaves and months-long drought in Sindh and Balochistan. Only a few months later, Pakistan broke its decades-long rainfall record with the two provinces receiving 500 percent more precipitation than the annual average.

Sara Hayat, a Lahore-based climate change lawyer and policy specialist, told Al Jazeera to ascertain what has caused the devastating floods, it needs to be seen as a pyramid of factors with the foundational one being global climate change.

Hayat said the flooding was caused by excessive torrential rain, as well as glacial melt in the north of the country.

“Pakistan generally gets three to four cycles of monsoon rains,” she said. “This year we have received eight already and there are predictions that rain will go on till October. This is extremely unusual.”

Ali Tauqeer Sheikh, an Islamabad-based climate change analyst, told Al Jazeera that unlike the 2010 floods that were riverine in nature, this year saw multiple types overlapping each other that resulted in “such heavy destruction across the country”.

Sheikh highlighted urban flooding, flash flooding, glacial lake bursts as well as cloud bursts as some of the different types of flooding to hit the country, all linked to climate change activity.

“These are not routine floods. In fact, we have not had riverine floods at all this year. This is perhaps the first time we have climate change affecting patterns of monsoon. Only time will tell if it was a freak event of nature, or if it becomes more routine,” he said.

Hayat said while it is easy to pin blame on the government, preparing for this scale of flooding was always going to be a difficult job.

How do these floods compare with 2010?

While monsoon rains have lashed the country since June, it was only in late July when the intensity and scope became clear.

Since then, Prime Minister Shehbaz Sharif called the floods “unprecedented”, and Sherry Rehman, the climate change minister, described the situation as the worst in living memory.

“Those floods displaced 20 million people. This year the floods have not ended and we have already calculated at least 33 million people who are badly impacted. The complete scope of the disaster will only emerge in coming months when the water starts receding,” she said.

Shahrukh Wani, an economist at the Blavatnik School of Government, University of Oxford, agreed given the scale of this year’s flooding it will “either meet or exceed the damage caused by the 2010 floods”.

“Unlike in 2010, global conditions are very different right now. Much of the global aid momentum is focused on Ukraine and many developed countries are themselves facing economic crises at home, which might mean that Pakistan will have less international support than it did in 2010,” Wani told Al Jazeera.

What are the challenges ahead?

At a time when the country is already reeling from back-breaking inflation and barely averted a default after the International Monetary Fund (IMF) approved $1.17bn in funds, a once-in-a-lifetime flood was the last thing the South Asian nation needed.

Added to this volatile mix is perpetual political instability, exacerbated since the removal of the Pakistan Tehreek-e-Insaf (PTI) government in April.

Sharif recently told international media he is willing to sit down with former Prime Minister Imran Khan to find a way to address the woes facing flood victims.

Hayat said it is imperative that political warmongering stop and priorities be adjusted to face the daunting challenge of rebuilding.

“One of the biggest challenges we will face is when the country goes into election cycle. When that happens, you start thinking only about politics. But it is necessary that flood relief efforts and rehabilitation of the affected population must accompany all political conversation in the country.”

Wani said Pakistan will suffer “catastrophic” economic repercussions because of the floods.

“There is the immediate impact on destroyed food crops, homes, roads, and livestock. This affects both people who are directly impacted by the flood by wiping out their household wealth, but also people in major cities through increasing the cost of food,” he said.

Pakistan faces a “very difficult winter ahead” as it will need money for a “nationwide rebuilding effort post-floods, meeting the demands set up by the IMF programme, competing with Europe to secure gas imports, and cushioning the impact of increasing food inflation”, Wani warned.

But the biggest challenge for Sheikh is if flooding such as this year’s becomes a regular feature rather than a one-off.

“Worst case scenario would be if we get multiple kinds of floods we had this year plus the riverine flood together. The devastation would be unimaginable,” he said.

“First order of business is that we must protect our community and do not grant permits which allow construction on river banks, river shoulders. No amount of money nor any technology can save structure which is built next to the river,” he said.