When the Shia spiritual leader Ayatollah Kadhim al-Haeri announced last week that he would step down as a religious authority, Muqtada al-Sadr realised that he was facing a challenge to his own standing within the Shia community in Iraq.

The 83-year-old al-Haeri, despite his disagreements with al-Sadr, has long been the religious scholar that the Sadrist movement followed in their spiritual and life affairs.

He gained that authority after a special recommendation from the former leader of the Sadrists, Ayatollah Muhammad Muhammad Sadiq al-Sadr, Muqtada’s father, who was killed in 1999 along with two of his sons in the city of Najaf.

On Sunday, al-Haeri announced that he was stepping down due to health reasons and asked his followers to rally behind Iran’s Ayatollah Ali Khamenei. The message dealt a blow to al-Sadr, who gained some of his clout from al-Haeri’s supporters.

The move came as the relationship between al-Sadr and the Iranians reached a new low point, with both sides at odds over the fate of the political process in Iraq, where political parties have failed to form a government after elections.

Al-Sadr responded on Monday by announcing his retirement from politics in a statement posted on Twitter. It appeared that he intended to rally his supporters onto the streets of Iraqi cities including the capital, Baghdad.

Following the announcement, al-Sadr’s supporters, who largely come from the outskirts of the Iraqi capital, roamed Baghdad and entered the presidential palace and the parliament.

But al-Sadr has previously said he was retiring from politics several times, even going as far as suspending his political activities and closing his movement’s offices. This has raised questions about whether his latest pledge to withdraw from politics is part of his overall strategy to strengthen his position in negotiations to form a government.

But al-Sadr’s escalation wasn’t solely to demonstrate his clout. The frayed political contract and the state of fragmentation in political representation in Iraq weren’t enough for parties to put aside their differences and devote themselves to reviving the political process.

Divisions have been increasing since the United States invasion in 2003 and the removal of President Saddam Hussein, which resulted in the dismantling of Iraqi state institutions.

The result of the Iraqi general elections in October 2021 showed that confidence in the political elite has reached its lowest level, with nearly 60 percent of the Iraqi electorate boycotting the democratic process.

Al-Sadr had the most success in mobilising his supporters and winning the largest number of seats, followed by his historical rival, former Prime Minister Nouri al-Maliki.

Because al-Sadr’s share of the vote remained very far from the number required for a majority in parliament – 165 seats – al-Sadr had to establish alliances in an attempt to form a government.

Nevertheless, a coalition called the Coordination Framework, which includes other anti-Muqtada Shia forces, and which is close to Iran, was keen to obstruct efforts to form what al-Sadr repeatedly described as a national majority government.

Al-Sadr’s attempts to form alliances failed to result in a government, and his MPs resigned upon his request. His supporters filled the streets and occupied the parliament building as he called on his opponents to form a minority government.

This did not work, and he was left with only one option: calling for early elections. But these, in turn, may not be enough to get Iraq out of its structural crisis.

The lack of confidence in the political system may lead to results similar to the last elections, held in 2021 and boycotted by around 60 percent of voters.

Therefore, there are growing calls for the launch of a comprehensive political dialogue process that could contribute to addressing the major outstanding concerns. However, there are issues that the internal dialogue may not be able to resolve, including external influence in Iraqi politics. 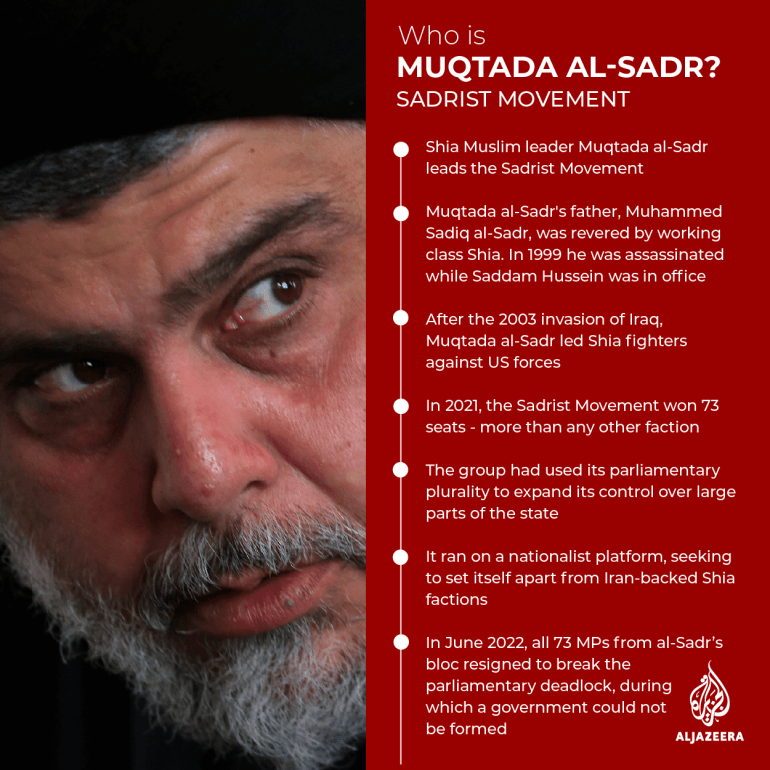 A significant part of al-Sadr’s struggle with his opponents cannot be separated from the fact that they are allied with Iran, and al-Sadr has since become more emboldened to demand the containment of Iranian influence in his country.

The issue here becomes more complicated given that al-Sadr studied religion at the Qom Seminary in Iran, and part of his extended family lives in the Iranian capital, Tehran. Meanwhile, Iran appears to be in an unenviable position as it watches the Shia forces wrestle with each other in the most serious internal Shia conflict in years.

The limited Iranian leverage over the Iraqi scene follows the US assassination in January 2020 of the commander of the Quds Force in Iran’s Islamic Revolutionary Guard Corps, Qassem Soleimani, who had enjoyed warm relations with Iraqi political forces and was able to contain crises regardless of their complexity.

It is true that al-Sadr appealed to his supporters to withdraw from the streets and return to their homes, and that he condemned violence. But it is also true that the state of surprise that al-Sadr reflected in his speech – along with discontent with his masses and his threat that he would not continue as the leader of the Sadrist movement in the event that his supporters did not leave the streets within 60 minutes – carried messages in a different direction.

Al-Sadr showed that if he does not guide his supporters then no one will be able to control what is happening, that he remains able to withdraw his men from the street if he makes a decision to do so, and that if he retires from politics permanently, he would remain the most powerful man among politicians in his country.

What al-Sadr knows well is that he will continue to have the upper hand when it comes to protests, sit-ins, and all sorts of peaceful manifestations, but the moment his supporters decide to engage in armed confrontations, he’ll be the first amongst the losers, if not the main loser, and that could explain his decision to intervene.