Tuesday’s move came shortly after al-Sadr called on his supporters to retreat and demanded an end to fighting between rival Shiite forces and the army that left 30 dead and hundreds wounded.

“I apologise to the Iraqi people, the only ones affected by the events,” al-Sadr told reporters from his base in the central Iraqi city of Najaf.

After his speech was broadcast live on television, his supporters started dismantling encampments and clearing the Green Zone, where municipal workers began cleaning up shells and bullet casings left in the wake of the unrest.

Shortly afterwards, the army lifted a nationwide curfew imposed since violence erupted on Monday, raising hopes that there might be a halt to the deadliest violence in years.

The latest violence also prompted Iraq’s President Barham Saleh to push for “new, early elections in accordance with a national consensus,” saying they could provide “an exit from the stifling crisis”.

Later on Tuesday, Iraqi Prime Minister Mustafa al-Kadhimi said he would “vacate his post” if the complicated political situation in the country continues.

The unrest began on Monday when al-Sadr announced he would resign from politics and his supporters stormed the Green Zone, once the stronghold of the United States military that is now home to Iraqi government offices and foreign embassies.

“This is not a revolution,” al-Sadr said in his televised address, which followed pleas for restraint and peace from several Iraqi officials and the United Nations.

His decision to quit politics came after weeks of protests by his supporters in the wake of a political crisis that has left the country without a new government, prime minister or president for months.

International Crisis Group’s Iraq analyst Lahib Higel said al-Sadr “clearly wants to show his rivals that he has control over his crowd” by ordering them into the streets and back when things escalate too far.

“Sadr’s statement was quite clear indicating that he does not want further escalation,” Higel told Al Jazeera.

Al-Sadr, a grey-bearded Muslim leader with millions of devoted followers who once led a militia against American and Iraqi government forces after the 2003 US-led overthrow of Saddam Hussein, announced on Monday his “definitive retirement” and said he had “decided not to meddle in political affairs”.

Overnight Monday and on Tuesday morning, clashes raged between al-Sadr’s supporters and the army and men of the Hashd al-Shaabi, former Tehran-backed paramilitaries integrated into the Iraqi forces.

On Tuesday, medics updated the toll of al-Sadr supporters killed to 30, with some 570 others injured – some with bullet wounds and others suffering from tear gas inhalation.

A mass funeral was held on Tuesday in Najaf, a Shia holy city, for some of the protesters killed in Baghdad.

Iraq’s government has been deadlocked since al-Sadr’s party won the largest share of seats in October parliamentary elections but not enough to secure a majority government – unleashing months of infighting between different Shia factions.

Al-Sadr refused to negotiate with his Iran-backed Shia rivals, and his withdrawal on Monday catapulted Iraq into political uncertainty.

Sarkawt Shamsulddin, a former Iraqi member of parliament, said as long as there are “fundamental problems” and “corruption” in Iraq, there will always be grievances among the people, regardless of their affiliations.

“There are wider calls in Iraq for constitutional reforms … and there are also calls for getting Iraq back on track economically,” Shamsulddin told Al Jazeera.

“The only problem preventing Iraqis from getting a prosperous life is the political and ruling elite,” he said.

“Sadrists have been occupying over 300 positions in senior political positions in the government,” Shamsulddin said “They are a big part of the current crisis in Iraq.”

Also on Tuesday, Iran reopened its borders to Iraq after a brief closure and resumed flights to the neighbouring country.

Earlier on Tuesday, al-Sadr’s supporters could be seen on live television firing machine guns and rocket-propelled grenades into the heavily fortified area through a section of pulled-down concrete walls. Security forces armed with machine guns inside the zone sporadically returned fire.

Al-Sadr’s nationalist rhetoric and reform agenda resonate powerfully with his supporters, who largely hail from Iraq’s poorest sectors of society and were historically shut out of the political system. 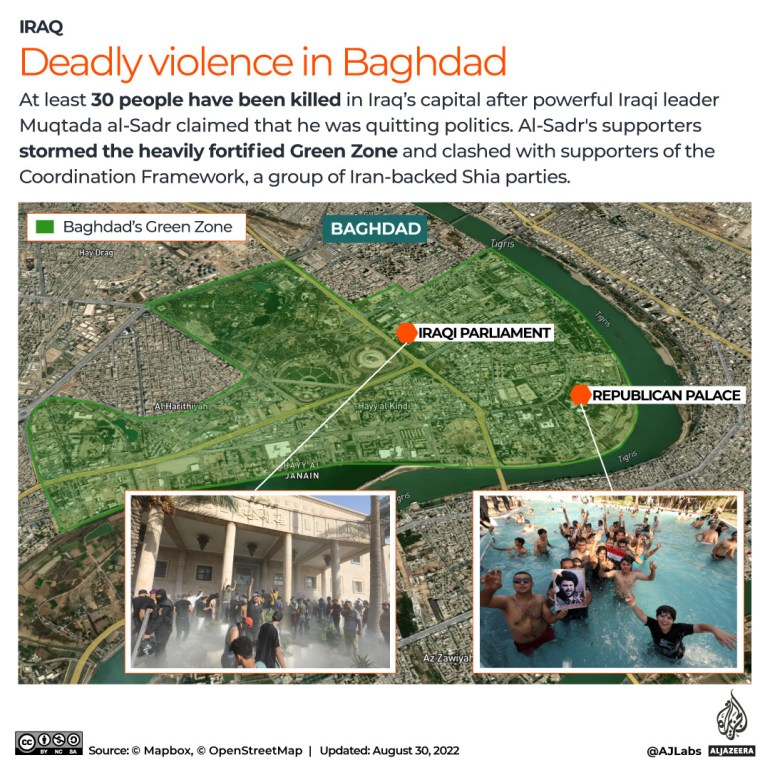