Islamabad, Pakistan – The government has declared devastating floods a “national emergency” after nearly 1,000 people died and more than 30 million are “badly affected” as monsoon rains continue to lash the South Asian nation.

At least 937 people have died since mid-June, including 343 children, according to the National Disaster Management Authority (NDMA), with large swaths of the southwestern province of Balochistan remaining submerged, bringing back the memory of the devastating 2010 floods. 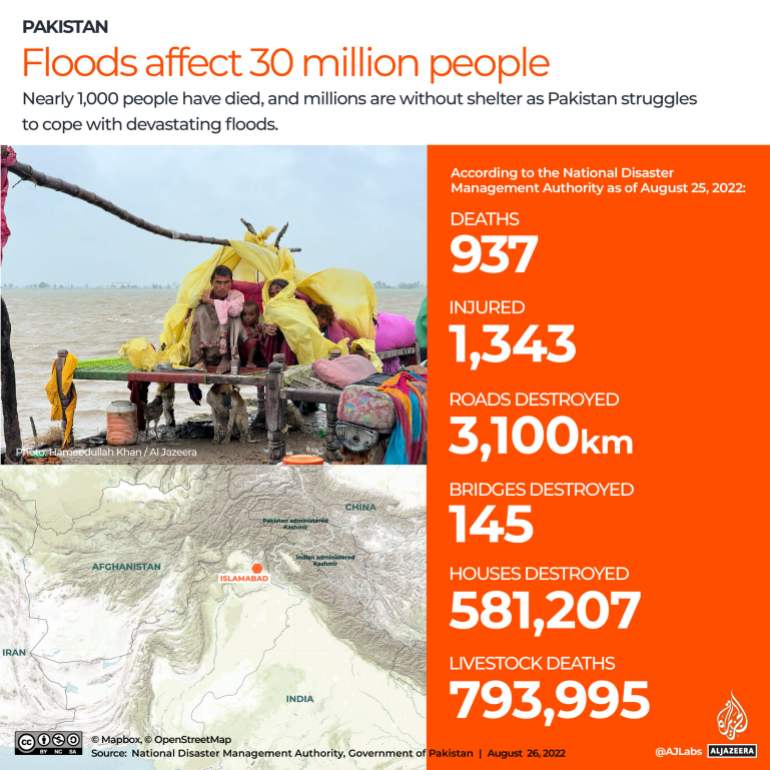 More than half of the casualties are from Balochistan and southern Sindh province where 234 and 306 people died respectively amid record rains that have affected half a million houses across the country.

Fida Hussain Shahani, a labourer from a remote village in Sindh, is grieving for his son who was swept away by the deluge.

“Yesterday, the flood water kept rising and entered our house. While trying to reach high ground, my 17-year-old son was left behind. I only managed to find his body this morning,” Shahani said from Shahani village on Friday.

The 42-year-old says his family of 12 has not been provided with any relief or aid from the government and only volunteers came to his help.

He said the magnitude of this year’s rains was unprecedented. “Things were not so bad even in the 2010 floods. We never had to leave our village but this time, everything is destroyed,” he said.

Prime Minister Shehbaz Sharif has postponed his official trip to the United Kingdom, as he appealed for funds from friendly countries and international institutions amid the worst flooding in decades.

“The ongoing rain spell has caused devastation across the country. The losses, though yet to be documented, are comparable to flash floods of 2010,” Sharif tweeted, referring to the deadly 2010 floods.

More than 100 districts across four provinces have been hit by the floods, with Balochistan’s capital Quetta isolated from the rest of the country as many highways and bridges have been swept away by the deluge.

In Khyber Pakhtunkhwa province, where nearly 200 people have been killed, rescue efforts were in full swing, particularly in the worst-hit areas of Swat and Dir.

“In northern KP [Khyber Pakhtunkhwa] we are looking at Swat and Dir where we have flash floods situation arising, and with a lot of population on the banks, our focus is there,” Muhammad Ali Saif, the spokesman for the province, told Al Jazeera. He added that Dera Ismail Khan and Tank districts in the south of the province were also affected.

“We have managed to evacuate a large number of people, and provided them temporary accommodation in tents,” he said.

According to the NDMA forecast, parts of Punjab and Khyber Pakhtunkhwa might face “very high to an exceptionally high level of flooding” in the next few days. Balochistan also faces the threat of more flash flooding.

The federal minister for climate change, Sherry Rehman, on Thursday said a “war room” has been established at the NDMA headquarters in Islamabad to lead the relief efforts in the country.

Rehman added that “monstrous” rainfall is making relief efforts difficult due to the inability of authorities to reach the affected areas.

“Pakistan is going through its 8th cycle of monsoon; normally the country has only three to four cycles of [monsoon] rain,” the minister said during her news conference in Islamabad.

“Pakistan is under an unprecedented monsoon spell and data suggests the possibility of re-emergence of another cycle in September,” she said.

Two of the worst-hit provinces – Balochistan and Sindh – have received 298mm and 689mm rains respectively this year, which is about 400 percent more than the 30-year average.

Ali Tauqeer Sheikh, an Islamabad-based independent expert on climate change, said earlier floods were riverine in nature, but lack of development planning and climate change were causing the recent flood-related crisis in the country.

“In 2010, the floods were riverine in nature, which means they mostly impacted areas around the Indus River and they were mostly predictable. This time, there are multiple types such as urban flood, flash flooding and floods caused by glacier burst,” he told Al Jazeera by telephone.

“The frequency of heavy flooding is also increasing. Climate change is a threat multiplier.

“What we are seeing here in the country is development deficit. It is not only the excessive rain which is causing the issue, but rather the inadequate preparation and infrastructure,” he said.