By Marium Ali and Hanna Duggal

August 25 marks five years since a brutal crackdown by Myanmar’s military forced more than 700,000 Rohingya to flee from Myanmar’s Rakhine state to neighbouring Bangladesh. Today, that number stands at more than one million.

The Rohingya are a mostly Muslim ethnic group who have lived in Buddhist-majority Myanmar for centuries. However, Myanmar does not recognise them as an official ethnic group, making them the largest identified stateless community in the world.

According to the United Nations, there are about 600,000 Rohingya remaining in Rakhine state, while nearly one million of them are in neighbouring countries, mainly Bangladesh. The UN has described the Rohingya as “the most persecuted minority in the world”. 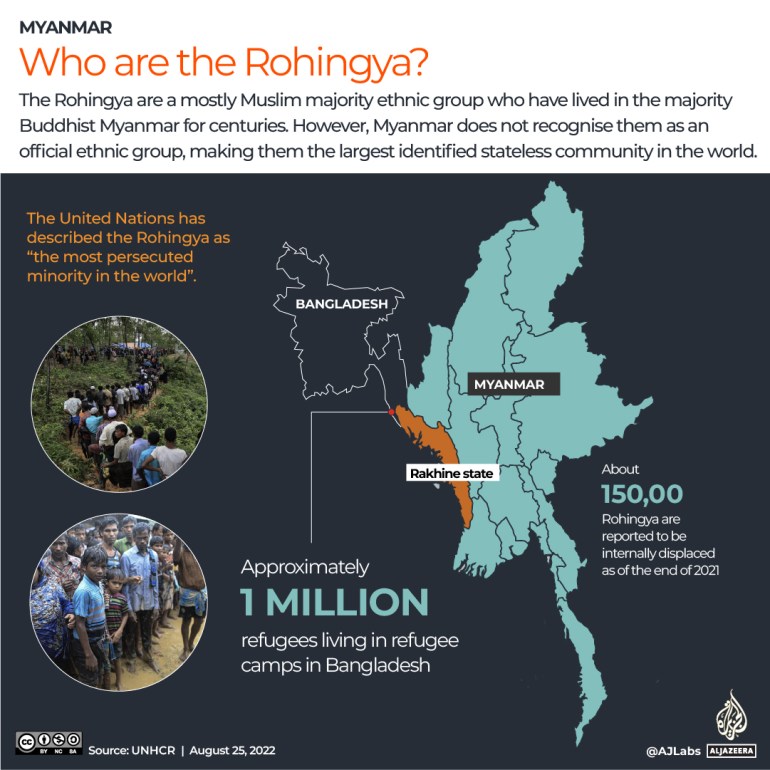 In 1982, a citizenship law excluded the Rohingya as one of the 135 official ethnic groups in Myanmar and barred them from citizenship, effectively rendering them stateless.

As a result, Rohingya families were denied basic rights and protection, making them vulnerable to exploitation, sexual and gender-based violence, and abuse.

According to the citizenship law, citizenship was granted to individuals residing in Myanmar, formerly known as Burma, who could trace their family residency prior to 1823. It created categories of citizenship, but the Rohingya were not included.

Nationalists in Myanmar believe that Rohingya are Bengalis who migrated to Myanmar illegally during the British rule of the Indian subcontinent.

A lack of reliable census data makes it hard to accurately map the ethnic breakdown of Myanmar’s population of 50 million.

However, some of Myanmar’s ethnic groups include Bamar, Shan, Karen, Rakhine, Kachin, Chin, Karenni, Mon, Wa, and Kokang Chinese. The government does not recognise the Rohingya. 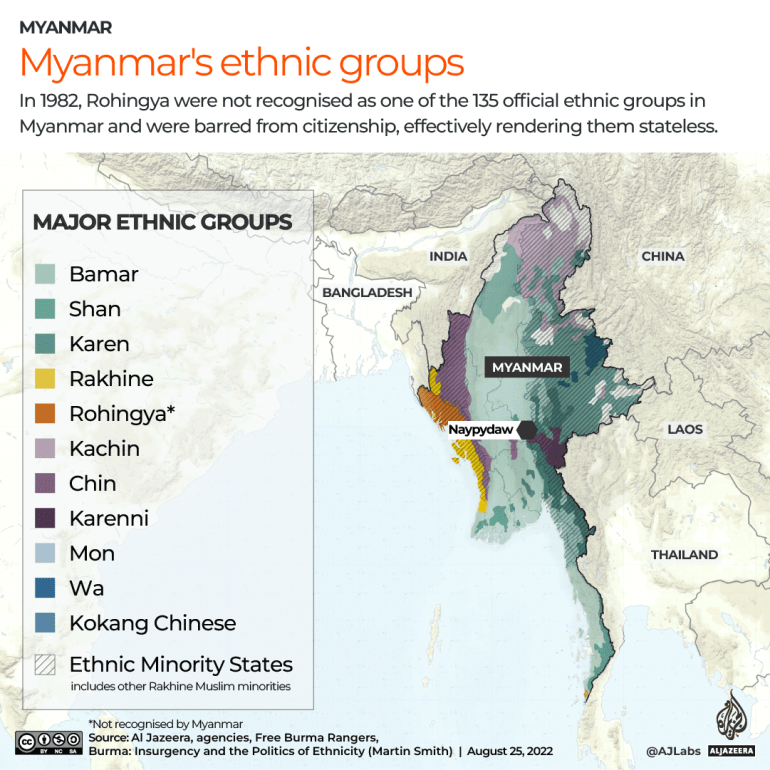 The Rohingya have faced persecution at the hands of Myanmar’s military since the country’s independence in the late 1940s.

According to the International Organization for Migration, more than 300,000 Rohingya arrived in Bangladesh in the 1990s. Violent clashes in Rakhine state continued in 2012 and 2015, displacing more Rohingya.

In October 2016, following an attack on some members of the Myanmar border police, the military started a crackdown on Rohingya, blaming them for the rebellion. This sent about 87,000 Rohingya rushing to Bangladesh for refuge.

The most recent military crackdown started on August 25, 2017, when an armed Rohingya group attacked military posts in Rakhine. The Myanmar military was reported to have burned dozens of Rohingya villages and fired indiscriminately at unarmed men, women and children.

In September 2017, the United Nations High Commissioner for Refugees (UNHCR) said the military operation in Myanmar was a ‘textbook example of ethnic cleansing’.

In November 2019, the International Criminal Court approved a prosecution request to investigate crimes against humanity by the Myanmar military.

Today, there are 980,000 refugees and asylum seekers from Myanmar in neighbouring countries.

Approximately 936,000 Rohingya refugees are living at the Kutupalong and Nayapara refugee camps in Bangladesh’s Cox’s Bazar region — camps that have grown to become some of the largest and most densely populated in the world. 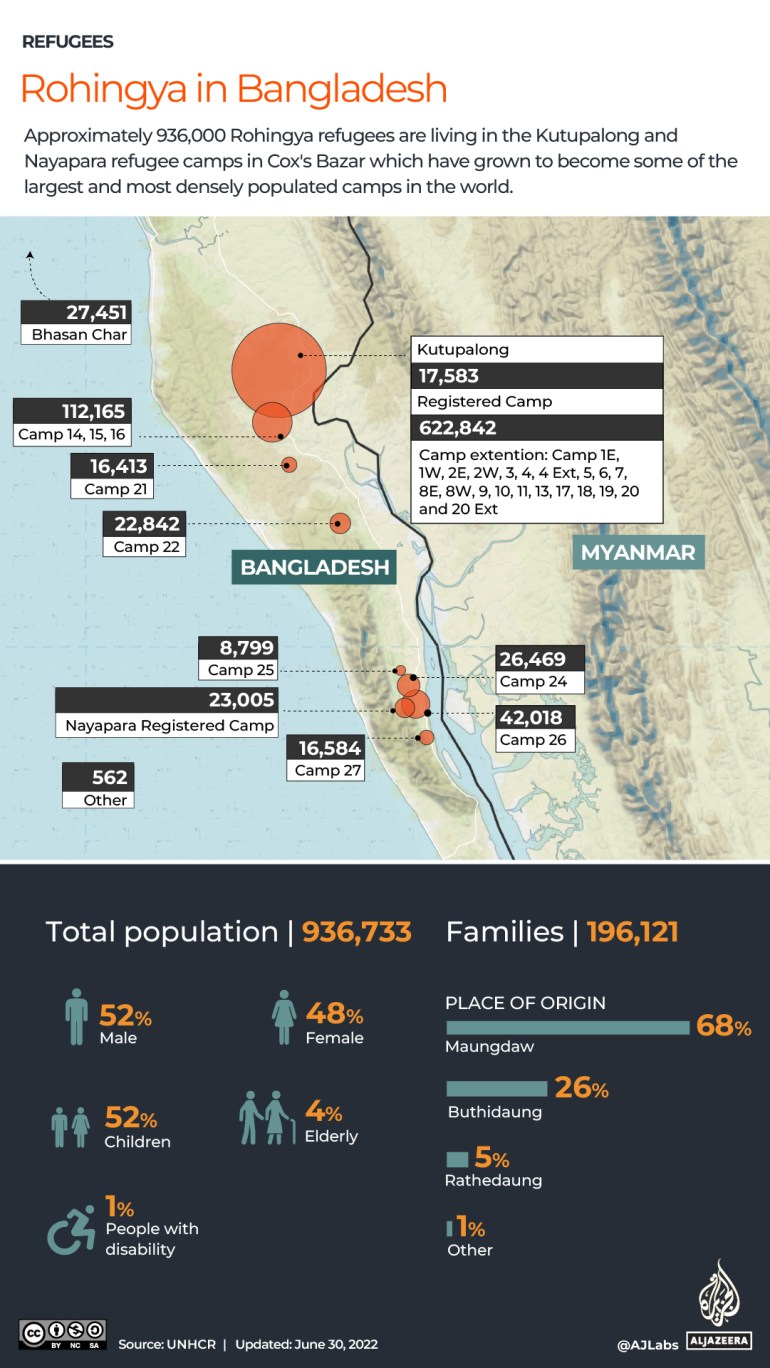 The almost one million Rohingya living in Cox’s Bazar refugee camps face difficult living conditions and are under constant threat from natural disasters.

The camps are overcrowded, lack sufficient sanitation and hygiene, and are poorly lit.

In March 2021, a severe fire in the camps burned thousands of shelters and further exacerbated the crisis. The COVID-19 pandemic has put added strain on this vulnerable population, particularly by increasing food insecurity.

Since May this year, camps in Cox’s Bazar have also experienced a surge in dengue cases, reports the World Health Organization (WHO).

According to WHO, there are 44 primary health centres and 90 health posts in the camps. Skin diseases and respiratory tract infections account for nearly half of the medical consultations. 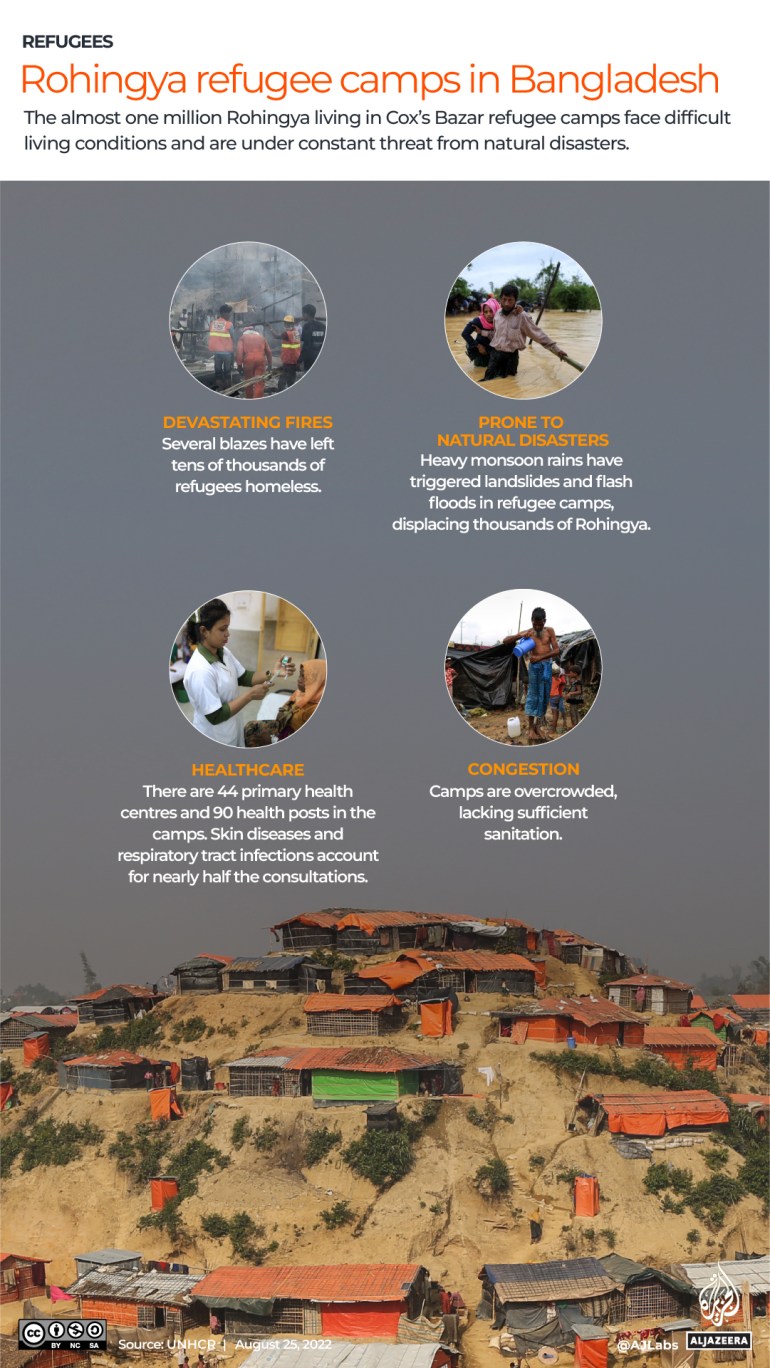