As Ukraine prepares to mark both its independence from Soviet-rule in 1991 and the six months since Russian troops invaded, President Volodymyr Zelenskyy has pledged that any Russian attacks in or around the date would provoke a powerful response.

Zelenskyy, who has led his country’s resistance since Russian troops poured over the border on February 24, also said Ukraine would restore its rule over the Crimea region – annexed by Russia in 2014 in a precursor to this year’s invasion.

Meanwhile leaders of dozens of countries and international organisations were taking part in the so-called Crimea Platform – most of them by video – in solidarity with Ukraine on the six-month anniversary of the invasion.

Opening the forum, Zelenskyy, dressed in his customary military gear, told delegates: “To overcome terror, it is necessary to gain victory in the fight against Russian aggression.”

“It is necessary to liberate Crimea. This will be the resuscitation of world law and order,” he said.

Al Jazeera’s Teresa Bo, reporting from Kyiv on Monday, said the Ukrainian capital “is banning any type of mass gatherings, while the city’s military administrator is ordering security forces to be ready to respond to any type of incidents, like missile attacks and bombings”. 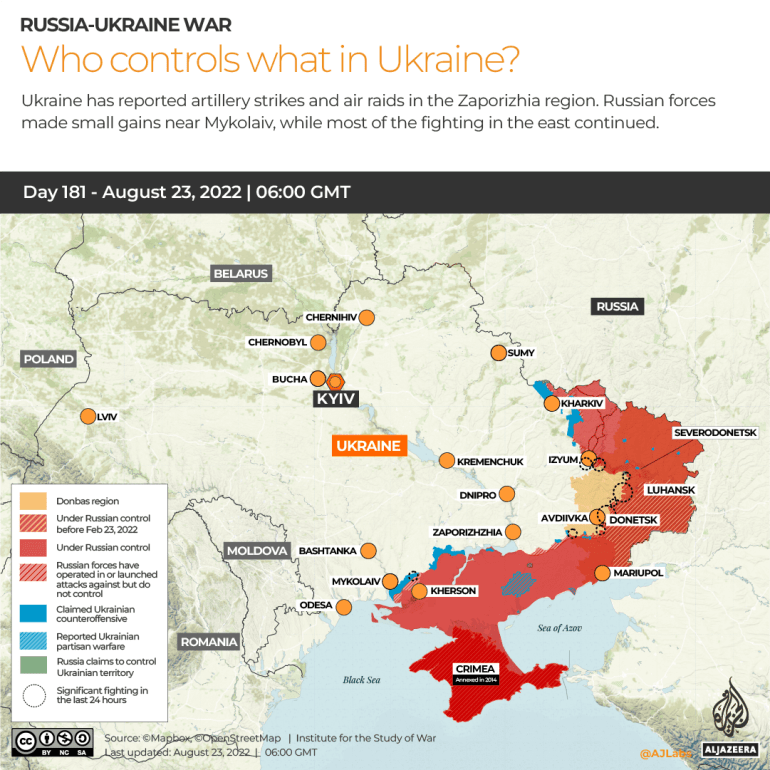 The ban came after Zelenskyy warned that Moscow could try “something particularly ugly” in the run-up to Wednesday’s 31st independence anniversary, which also marks half a year since Russia invaded.

The Reuters news agency, citing an official document, said the ban on public events related to the anniversary will last from Monday through Thursday.

Asked at a news conference with visiting Polish President Andrzej Duda about the possibility of a Russian missile strike on Kyiv, Zelenskyy said there was a daily threat of attacks although the number of them could increase.

Ukraine’s response would be the same for any city that comes under attack from Russia, he said.

“They will receive a response, a powerful response,” Zelenskyy said. “I want to say that each day… this response will grow, it will get stronger and stronger.”

Kyiv is far from the front lines and has only rarely been hit by Russian missiles since Ukrainian troops repelled a Russian ground offensive to seize the capital in March.

Other jurisdictions have also restricted public gatherings. In Kharkiv, a northeastern city that has come under frequent and deadly longer-range artillery and rocket fire, Mayor Ihor Terekhov announced an extension to an overnight curfew to run from 4pm to 7am, effective from Tuesday to Thursday.

In the port of Mykolaiv, near Russian-held territory to the south, regional governor Vitaliy Kim said authorities planned a precautionary order for residents to work from home on Tuesday and Wednesday and urged people not to gather in large groups.

The United States meanwhile said it has intelligence that Russia is planning to launch new attacks against Ukraine’s civilian and government facilities soon. A US official quoted by Reuters said “we have information that Russia is stepping up efforts to launch strikes against Ukraine’s civilian infrastructure and government facilities in the coming days.” The official said the statement was based on downgraded intelligence.

US citizens should leave Ukraine “now” by their own means if it was safe to do so, the US Embassy said.

In an evening address, Zelenskyy called for new punitive measures on Russia from Europe, which is bracing for energy shortages after Moscow announced a three-day halt to some gas flows to the continent in apparent retaliation to European Union sanctions.

Russia denies this, blaming the cuts on the sanctions themselves and various technical problems.

“Only question is how many lives Russia will be able to take before the backlash from the international community becomes really tangible to those who are responsible,” Zelenskyy said.

‘Sitting on a powder keg’

Near front lines in the south of the country, Ukraine said Russia fired rockets into several towns north and west of Europe’s largest nuclear power plant, the Zaporizhzhia facility, which was captured by Russian forces shortly after they invaded Ukraine in February.

The area’s regional governor, Valentyn Reznichenko, said Russian forces fired rockets overnight into the nearby towns of Nikopol, Krivyi Rih and Synelnykovskyi. The artillery and rocket fire near the Zaporizhzhia complex has sparked concerns of a nuclear disaster, with Ukrainians living near the plant voicing fears shells could hit one of the plant’s six reactors, with potentially disastrous consequences.

“Of course, we are worried. … It’s like sitting on a powder keg,” said Alexander Lifirenko, a resident of the nearby town of Enerhodar, now under the control of pro-Moscow forces.

The two sides have traded blame over the frequent shelling at the Zaporizhzhia nuclear plant, where Kyiv accuses Moscow of basing troops and storing military hardware. Russia denies this and accuses Ukraine of targeting Zaporizhzhia with drones.

To the south, renewed fighting and explosions were reported in Russian-occupied Kherson and in the Crimean peninsula, which Moscow annexed in 2014. In Kherson, the sole bridge across the strategic Dnieper River was hit by high-precision HIMARS rockets supplied to Ukraine by the US, injuring 15 people, a source in occupied Kherson’s emergency services told Russia’s Interfax news agency.

Explosions were also reported in the Crimean city of Sevastopol. The city’s Russian-appointed governor said an anti-air defence system had been triggered nearby.

Meanwhile, the Office of the UN High Commissioner for Human Rights, citing its monitoring mission in Ukraine, said on Monday that 5,587 civilians had been killed and 7,890 wounded since Russia launched its invasion of Ukraine, mainly from artillery, rocket and missile attacks.

UNICEF said at least 972 children have been killed or injured over six months of war.

“The use of explosive weapons has caused most of the child casualties. These weapons do not discriminate between civilian and combatant, especially when used in populated areas as has been the case in Ukraine,” the UN children’s agency executive director, Catherine Russell, said in a statement.

Russia has not said how many of its soldiers have been killed. Ukraine’s General Staff have estimated the Russian military death toll at 45,400.