By Taylor Johnson and Kelsey ButlerBloomberg

In the weeks since the Supreme Court overturned Roe v. Wade, an abortion desert has ballooned in the US South, where bans are hitting Black women hardest.

Across the country Black patients have an abortion rate roughly four times that of their White peers, in part due to lower use of contraception that leads to higher rates of unintended pregnancies. In the states that have moved quickly to enact restrictions, Black women make up a far larger proportion of abortion seekers than in places where abortion remains legal.

In Mississippi, Black patients accounted for 74% of all abortions in 2019, far above the national average of 38%, according to the most recent data available from the Centers for Disease Control and Prevention. Now, the state has a total abortion ban, and its only clinic plans to relocate to New Mexico.

In neighboring states, where bans or extreme restrictions are proliferating, the figures tell a similar story. Georgia, Alabama, Tennessee and Arkansas — where Black women seek abortions more than any other demographic — have all enacted near or complete bans this year.

All told, abortion access is now in jeopardy for 10 million Black women of childbearing age across the US. Many of them live in the South, where Black women are statistically likely to experience higher poverty rates, have less health care coverage and more instances of pregnancy-related complications and death than their White counterparts. Some will have to travel hundreds of miles to seek care, a hurdle many won’t be able to overcome.

“We’ve been living in multiple Americas for a long time,” said Kwajelyn Jackson , the executive director at the Feminist Women’s Health Center in Atlanta, which serves mostly Black patients. “But what we’re seeing is another basic human right to health and wellbeing being so out of reach for so many.’’ 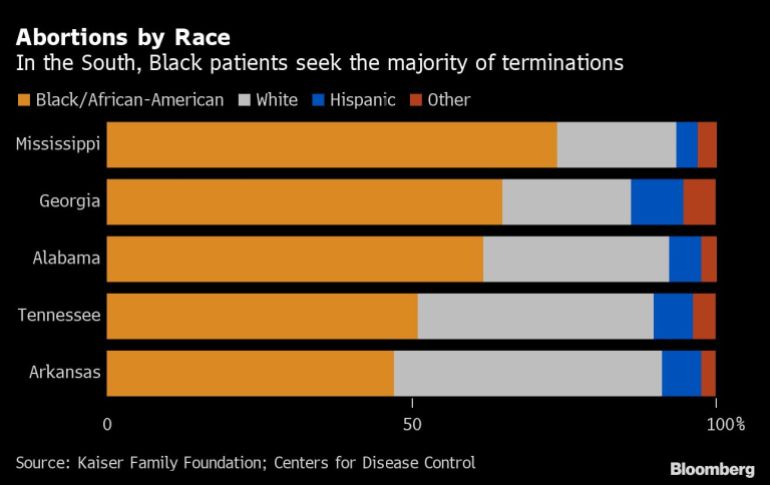 Consider a hypothetical patient in Jackson, Mississippi—the location of the clinic at the center of the Supreme Court case overturning Roe. She would have to drive nearly 400 miles to access an abortion in Tallahassee, Florida, a multi-day trip that would require access to a car, money for gasoline, at least one night in a hotel, time off work and possibly child care to pull off.

“It’s a system of inequality, it’s a system of oppression,” said Michelle Colón, founder of Sisters Helping Every Woman Rise and Organize in Mississippi, an abortion-rights advocacy group focused on Black women in the South.

Texas, where a six-week ban went into effect last fall, gives some sense as to what happens when a state puts strict limits on abortions. Researchers found that a third of people don’t find out they’re pregnant until at or after the six-week mark, leaving those who want to terminate a pregnancy with no in-state options. After the law went into effect, around 1,400 Texans chose to seek care out of state each month — most headed to neighbors like New Mexico or Oklahoma, according to an analysis by the University of Texas at Austin. (Oklahoma now bans abortions, too.)

But for many Black women living in the South, interstate travel just isn’t feasible. Across the country, patients in states hostile to abortion will find themselves driving six times as far on average to terminate a pregnancy as they would have when abortion was legal where they live. Before Roe was overturned, the Guttmacher Institute, an abortion-rights research group, estimated how driving distances would increase for abortion patients under a total ban in states that had already indicated they were hostile to the procedure. For Alabamans, the average one-way trip to the nearest clinic would be 352 miles, a 1,279% increase from pre-Roe times. In Georgia, patients would have to drive 203 miles one way, 10 times the previous distance.

“The reality is people are not going to be able to travel out of state,” said Robin Marty, the operations director for West Alabama Women’s Center. The clinic, where one-third of patients are Black, has stopped providing abortion care after a trigger ban outlawed the procedure in June.

Those who are trying to help absorb that need are already feeling the impact. 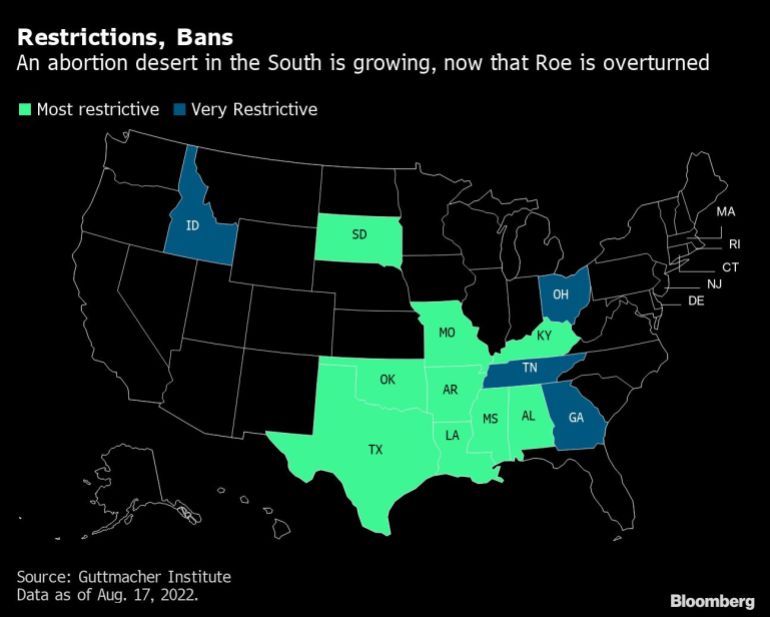 The National Abortion Federation has offered financial support for more than 3,500 abortions since the Supreme Court decision. The number of plane or bus trips for patients has jumped more than 50-fold year over year, and hotel bookings rose 1,400%, the group said in a statement released earlier this month.

Jackson, of the Feminist Women’s Health Center in Atlanta, said her facility saw 20 to 30 abortion patients weekly before the Texas ban went into effect. After, the caseload more than doubled to as many as 60 a week before Georgia’s new six-week restrictions went into effect last month. Now, clients who are too far along in their pregnancies mostly end up in North Carolina or Florida, states that have also moved to restrict abortion access but provide care past Georgia’s cutoff date.

In a lawsuit seeking to block Georgia’s restrictions before they took effect, clinics including FWHC argued that Black Georgians, who have one of the highest rates of maternal mortality in the country, are among those who “have the least resources to navigate the law’s cruelties.”

Pregnancy-related deaths are almost certain to increase as a result of abortion bans, researchers say. It’s simple math: More pregnancies carried to term means more risky deliveries, particularly for Black women, who statistically are more likely to face discrimination in health care and housing and lower quality maternal care. A 2021 study from the University of Colorado Boulder estimates that Black people would see the highest increase in those deaths under a total abortion ban in the US: 33%. That compares to a 13% jump for White and 18% for Hispanic people.

That would add to the already horrifying disparities that exist in maternal mortality in the US, where pregnant women and new moms die at higher rates than any other developed nation, and Black ones make up most of those deaths. The five states with the worst outcomes for moms from 2018 to 2020 — Arkansas, Kentucky, Alabama, Tennessee and Louisiana — are among those with the most restrictive abortion laws in the country.

In Alabama, where Black people make up 27% of the state’s population — more than double the 12% national average — the West Alabama Women’s Center of Tuscaloosa is desperately trying to avoid the fate of the 43 clinics, mostly in the South and the Midwest, that as of July had completely shut their doors following the Supreme Court decision.

Marty, the operations director, says the clinic is looking to shift to providing other reproductive health care. She estimates that without additional funding, the facility will close by the end of the year, undermining the community’s access to contraception and health screenings.

“What we need right now is to be investing more in the South,” Marty said. “We can’t abandon these people. We need to stay where we are the most needed. And at this point, as everyone else is leaving, that just becomes even more urgent.”

–With assistance from Mathieu Benhamou.