Somali forces ended a deadly 30-hour siege of a hotel in the country’s capital with security personnel clearing explosives planted by al-Shabab fighters in the damaged building.

“The ministry of health has so far confirmed the deaths of 21 people and 117 people wounded,” Health Minister Ali Haji Adan told national broadcaster SNTV on Sunday.

The Mogadishu attack began when fighters from the al-Shabab armed group unleashed a gun-and-bomb assault on the popular Hayat Hotel on Friday evening.

Three attackers were shot dead during the military operation to end the siege, said Hassan, a police captain who only gave one name.

A fourth was shot and killed in the area on Sunday morning as he attempted to melt into the civilian population, Hassan said, adding the exact number of attackers was still unclear.

The area surrounding the hotel was quiet and the roads were blocked by a heavy security presence on Sunday as emergency workers and bomb disposal experts sought to clear the premises of any explosives and remove rubble.

The hotel building sustained heavy damage during the gunfight between Somali forces and the attackers.

It caused some parts of it to collapse, leaving many people frantically searching for their loved ones who were inside when the siege began. 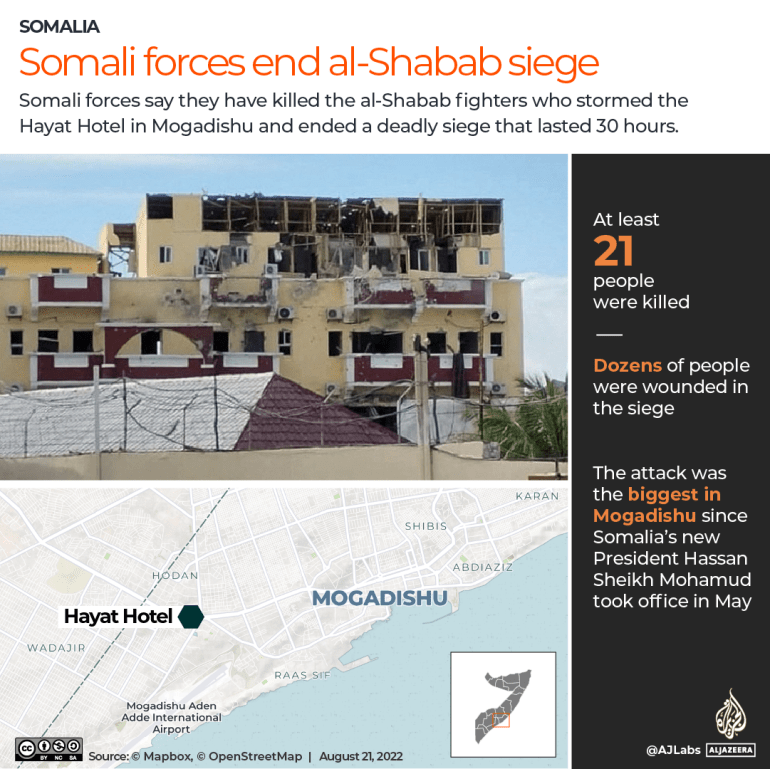 As bullets and flames ripped through the hotel, security forces searched the property to bring civilians to safety, including three young children who hid inside a toilet.

“The casualties mostly happened in the early hours of the attack, after that security forces spent time rescuing people individually and room by room,” Hijar said.

Friday’s attack at the Hayat, a hotel popular with lawmakers and other government officials, was the first major incident since President Hassan Sheikh Mohamud took office in May, and government forces stepped up operations against al-Shabab.

“This was the worst hotel siege we have seen,” said Ahmed, a police captain who only gave one name.

The attackers shot and killed civilians who fled towards the wall of the hotel compound and its blown-up gate after they struck, Ahmed said, adding they killed 10 security personnel with firearms and grenades.

Witnesses said they saw flames tear through the hotel during bombardment by security forces, with heavy explosions and gunfire reported.

The armed group linked to al-Qaeda, which claimed responsibility for the siege, has been fighting to topple the Somali government for more than 10 years. It wants to establish its own rule based on a strict interpretation of Islamic law.

“These hotels are usually attacked because that’s areas where government officials congregate. A lot of meetings, a lot of activities, especially right now, with the new government coming into place and setting up a lot of its appointments and its positions,” he said.

“But there’s also often a secondary element to some of these attacks. Al-Shabab runs a very extensive extortion racket within Mogadishu itself. And they target business owners that haven’t complied [with their demands].”

Al-Shabab was driven out of Mogadishu in 2011 by African Union forces, but it still controls swaths of countryside and is able to launch deadly attacks on political, civilian and military targets, with hotels and restaurants often hit.

In June, the group’s fighters carried out several attacks on villages near and across the border with Ethiopia, reportedly killing more than a dozen people, including Ethiopian police officers and civilians. Dozens of al-Shabab fighters also died in the attacks.

“Given that the president and his new security agenda, which is a top priority, has really sort of frazzled Shabab, they are really trying to strike in ways that have not yet been seen to show that they are an organisation to reckon with. What we’ve seen in the last couple of weeks shows Shabab has the capability and the wherewithal to execute these attacks, both within Somalia and in the border areas,” Ali told Al Jazeera.

“What is really baffling is that they are able to carry out these multiple attacks so successfully. It is something the security sector of Somalia needs to deal with, and also it’s a regional threat. Shabab is not just a Somali problem, it’s a regional problem. It is a global organisation.”