New Delhi, India – As India celebrates 75 years of independence, the country’s Muslims and other minorities say they find themselves in a state of siege.

Ruled by the Bharatiya Janata Party (BJP) since 2014, the South Asian nation has lunged rightwards under Prime Minister Narendra Modi, with an overt and organised state patronage to a Hindu majoritarian agenda worrying its Muslims.

Critics say Hindu majoritarianism has become a de facto state policy under Modi, with Hindu supremacist groups ratcheting up their demand to turn the country into a “Hindu Rashtra” or an exclusive Hindu state.

Across the country, Muslims are facing blatant and subtle discrimination from state and private institutions as well as Hindu right-wing groups backed by Modi’s Bharatiya Janata Party (BJP).

Whether it is what Muslims wear, eat, their places of worship and their constitutional rights to practise and preach their religion – all have been systematically attacked, banned, demolished or diminished since Modi came to power in 2014.

For the first time in India’s history, its governing party does not have a single Muslim parliamentarian.

“If Hindu Rashtra means assigning second class status to Muslims, then India has practically already become one. Now it’s a question about making it official. Even If they don’t do it, the change has taken place”, author and journalist Dhirendra K Jha told Al Jazeera.

Legislative decisions are equally indicative of the changing nature of the Indian state.

The Modi government in 2019 passed the Citizenship Amendment Act, which grants nationality to non-Muslim minorities from neighbouring countries. The passage of the law led to unprecedented protests and even religious violence in the national capital, killing at least 53 people.

Last week, in Modi’s constituency Varanasi, right-wing Hindu organisations released a 32-page draft constitution of a “Hindu Rashtra” which aims to deny Muslims and Christians the right to vote.

The “Hindu Rashtra” that is being talked about can only be based on injustice and atrocities and would be opposed to non-Hindus, especially Muslims, activist Khalik Khan told Al Jazeera. Khan is based in Faizabad, a twin city of Ayodhya – the ground zero of the Hindu supremacist movement.

“The aim is to disempower and demoralise our community and reduce them to a pariah status in society,” Khan said.

The BJP rose to prominence in the 1990s on the back of a religious movement that polarised the country’s Hindus and Muslims, with the latter labelled as “invaders” and “outsiders”.

In 1992, the then-BJP government in the northern Indian state of Uttar Pradesh allowed a Hindu mob to demolish the Babri Mosque, a 16th-century structure in Ayodhya, because they believed it was built on the exact spot where Hindu God Ram was born.

In November 2019, India’s Supreme Court ordered the construction of a Ram temple on the site, despite ruling that there was no evidence to prove any such temple existed there before the mosque. Muslims were given a plot 25km (16 miles) away to build a mosque.

Six months after the ruling, Modi laid the foundation stone of the temple amid elaborate Hindu rituals, with the state and private media broadcasting the ceremony live.

Three years later, the construction of the new mosque has not even begun as government clearances are enmeshed in bureaucratic red tape.

As the British colonial rule ended in 1947, the Indian subcontinent was split along religious lines: Hindu-majority India and mainly Muslim Pakistan. The partition is believed to have killed nearly two million people and displaced more than 15 million on both sides of the hastily-drawn border.

India, under Mahatma Gandhi and first Prime Minister Jawaharlal Nehru, was birthed as a beacon of secularism: a democratic republic that would allow all its peoples equal liberty of belief, faith and worship.

Gandhi was assassinated four months after independence in early 1948 by a Hindu supremacist for his beliefs. Since then, Hindu nationalists blame him and Nehru’s Congress party for the “vivisection of an undivided India”.

The BJP is the political arm of the Rashtriya Swayamsevak Sangh (RSS), a secretive far-right paramilitary organisation founded along the lines of European Nazism in 1925. The RSS aims to turn secular India into an exclusive Hindu state and counts Modi among millions of its lifetime members.

The RSS is the ideological parent of the BJP and dozens of other Hindu right-wing groups across and outside the country. It believes in the idea of “one nation, one people, one culture”.

“Understanding our commonality of being sons of the same soil, respecting the differences, leaving selfish attitudes behind, avoiding any discrimination and nation first approach in every context is the need of the hour,” RSS chief Mohan Bhagwat wrote in his organisation’s mouthpiece last week.

But Vinayak Damodar Savarkar, the chief RSS ideologue from early 20th century, was more forthcoming in his opinion about India’s Muslims.

“For though Hindustan [Persian name for India] to them [Muslims] is Fatherland as to any other Hindu, yet it is not to them a Holy Land too. Their Holy Land is far off in Arabia or Palestine,” he wrote in his book, the Essentials of Hindutva.

Hindutva refers to the Hindu supremacist movement led by the RSS.

“Their mythology and godmen, ideas and heroes are not the children of this soil. Consequently, their names and their outlook smack of a foreign origin. Their love is divided,” Savarkar wrote.

Al Jazeera reached out to an RSS spokesman for his comments but he refused to talk. 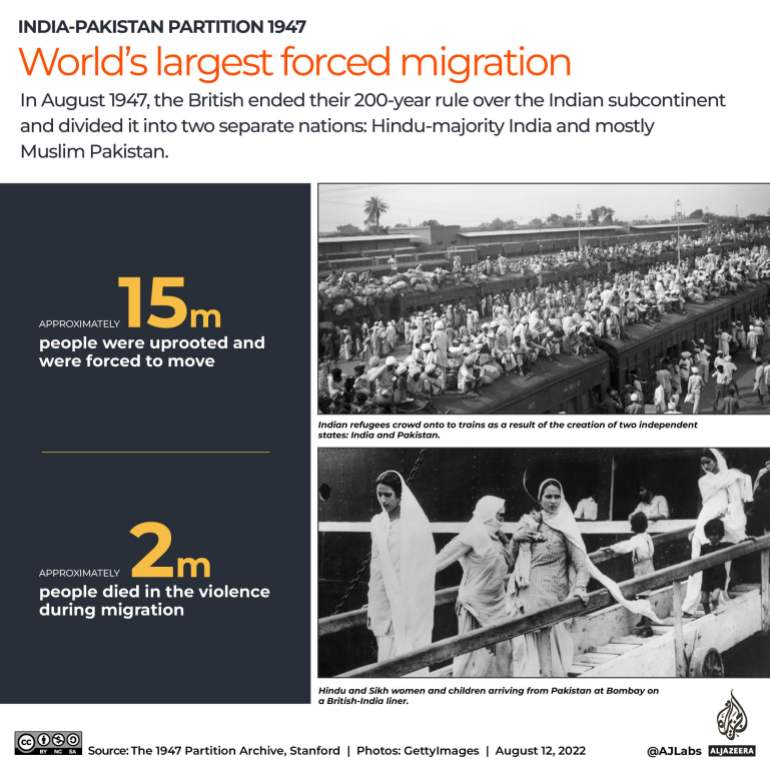 ‘Attack on a dream’

In Modi’s India, the accusation of Muslims having extraterritorial loyalties has been revived into a terrifying and daily test for the community and has led to calls for their economic and social boycott.

For the past 75 years, Indians had marked August 15 by flying kites – a subtle allegory of achieving freedom from British rule.

This year, the BJP launched a “Har Ghar Tiranga” (every home with tricolour) campaign to ensure the national flag is hoisted in every building in the country.

“We believe that whoever doesn’t take part in the Har Ghar Tiranga programme is essentially against the nation and is a puppet of those who want to break India. They should be held accountable,” Sharad Sharma, spokesman for the far-right Vishwa Hindu Parishad (World Hindu Council), told Al Jazeera.

“Nobody should be afraid. In fact those who are scared are probably under the influence of Pakistan and Rome. I don’t think there is any fear in India.”

I remember 50 yrs of independence. We hoisted the tricolour at school, sang the national anthem. Listened to Rahman's 'Maa Tujhe Salaam' on tape – play, rewind, play. We felt proud and patriotic, and it all came naturally. No one asked us to do it. They were simpler times.#India

But Muslim poet and educator Sabika Abbas Naqvi said Muslims do have reasons to be scared.

“The idea of Hindu Rashtra is laced with fear. It feels like an attack on a dream that we had built collectively,” she told Al Jazeera.

“Today, as a Muslim woman, I feel our identity is in danger. This new India is being built on our lynched bodies and the debris of our lives and our dreams. We fear we are being excluded from a nation that guaranteed us belongingness under the constitution.”

Recently, Modi unveiled an aggressive version of India’s national emblem with snarling lions atop an under-construction parliament building – part of the Hindu leader’s pet project in central New Delhi. The structure is far removed from the original whose lions had a self-assured countenance and laid more emphasis on the wheel of Dharma (duty in Sanskrit), also present in the national flag.

“To a great extent, at the moment, caste-based differences and the vision of Brahminical hegemony have been concealed by the superimposition of the façade of Hindu nationalism,” film director Saeed Mirza told Al Jazeera.

In the transformation of the national emblem, many Indians see a reflection of the country turning away from its plural and tolerant mores towards angry and hate-fuelled majoritarianism.

“Muslims though not a homogenous community in India are united by increasing discrimination and persecution. Everywhere, their first concern is security of life and livelihood, the poorest among them being most vulnerable,” Tanweer Fazal, a professor of sociology at the University of Hyderabad, told Al Jazeera.

“Unless Indians themselves defeat religious polarisation and communal politics, the community will remain besieged for the foreseeable future.”