Children accounted for a third of the number of Palestinians who were killed in Israel’s latest offensive on the Gaza Strip.

The Israeli assault from August 6 to August 8 killed 47 Palestinians, including 16 children.

“During their short lives they experienced the terror and loss of war after war, with no chance of a peaceful childhood,” said Al Jazeera’s Natasha Ghoneim, speaking from Jabaliya refugee camp in the north of the besieged Palestinian territory.

In the few hours leading up to the announcement of a ceasefire between Israel and the Palestinian Islamic Jihad group on Sunday, all least eight Palestinian children were killed in two separate attacks barely minutes apart.

Three of the children – 13-year-old twins Dalia and Mohammed and their nine-year-old brother Ahmed – were killed along with their father, Yaser Nabahin, by an Israeli air raid on their home in al-Bureij refugee camp.

The other five – ranging from four to 17, were mostly from the Najam family. They had gone to visit their grandfather’s grave in a cemetery in the Jabaliya camp, before an Israeli drone attack tore their bodies apart.

Ramadan Shaban was also at the cemetery and said the five boys had passed by him.

“There was nothing going on in the cemetery,” he told Al Jazeera. “It was safe. Just a few seconds after they passed I heard the sound of an armed drone hit the children. I looked up and found the children dead.”

One of the Najam boys’ fathers, Ehab, said there is no security for children in Gaza.

“This cemetery the Israelis hit is like a park for our children,” he said. “I ask the international community to pressure Israel to stop killing our children.” 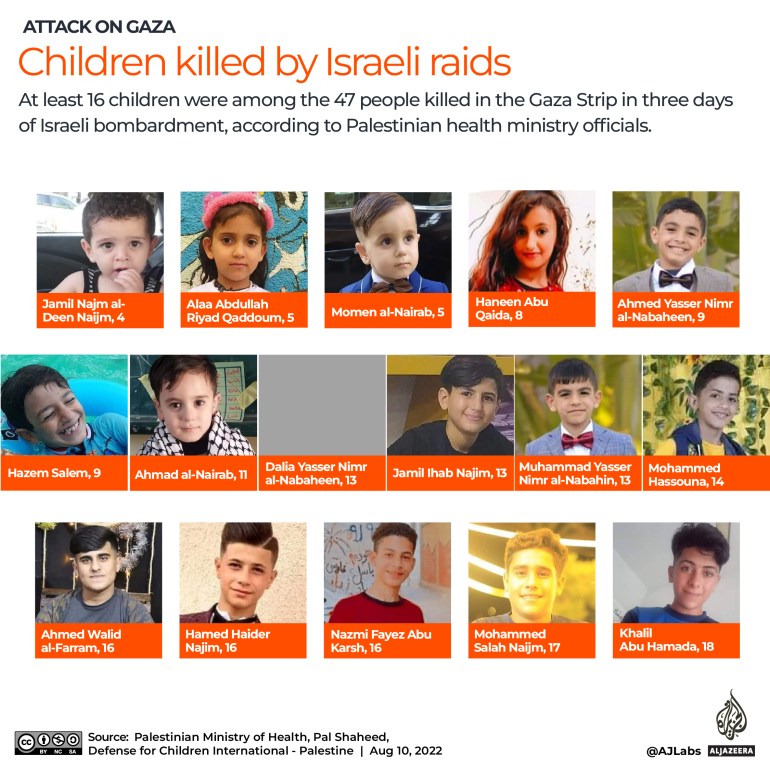 Last Friday, Israel launched a new offensive on the besieged Gaza Strip, which is still reeling from the May 2021 war that killed more than 260 Palestinians and destroyed thousands of homes, buildings and businesses.

This time, Israel said it carried out “preemptive” raids on Gaza after arresting a senior political member of Palestinian Islamic Jihad group in the occupied West Bank.

The group did not react to the arrest, but after an Israeli missile killed one of their senior commanders Taysir al-Jabari on Friday, Islamic Jihad’s armed wing launched a volley of rockets towards Israel. No casualties were reported.

Of the 16 children killed in Gaza, nine lived in the Jabaliya refugee camp.

On Saturday, four other children in the camp were killed, some as they went to buy treats from a market.

The bodies of Hazem Salem, 9, and brothers Momen and Ahmad al-Nairab, 5 and 11 respectively, arrived at the nearest hospital in pieces. Khalil Abu Hamada, 18, was also killed.

Najwa had to wait 15 years before conceiving Khalil, her only child, through IVF treatment.

“When Khalil was born I had a feeling he wouldn’t live long,” she said. “But I never expected he would die this way.”

The Israeli military has told Al Jazeera that 200 of the rockets launched by Palestinian Islamic Jihad misfired and some killed civilians.

“[Israel] says the incident at the Jabaliya cemetery is still being investigated, but the first incident [on Saturday], which killed four children, was the result of an errant rocket fired by the armed group,” Ghoneim said.

Palestinians who witnessed the attack reject that, saying the damage to the surrounding cars and the force of the explosion are consistent with Israeli air raids over the years.

“It’s not true,” said Iyad Abu Hamada, Khalil’s father. “I saw with my own eyes the Israeli rocket from the roof of my home. The Israelis massacred my son. There is no doubt. The Palestinian groups are not responsible.”