Quetta, Pakistan – Naimatullah was sleeping with his family members when the floods entered their mud house in Gandawa, a small town in Jhal Magsi district of Pakistan’s Balochistan province in the remote southwest.

Large parts of the South Asian nation, home to 220 million people, have been hit by flash floods and landslides caused by heavy monsoon rains, inundating homes, bridges and roads.

“In the morning, we started looking for our livestock and other necessary goods but it was too late. Suddenly our house collapsed in front of my eyes due to heavy downpours and flooding in my village,” Naimatullah told Al Jazeera.

Jhal Magsi, 345km (214 miles) from Balochistan’s capital Quetta, is among dozens of Pakistani districts that were submerged by the rains, killing at least 437 people since the middle of June and forcing the evacuation of thousands of people, according to officials.

“Most of the people in Gandawa and nearby villages are farmers. Our agricultural land was destroyed and crops of rice and wheat damaged which will increase our economic woes in future,” Naimatullah told Al Jazeera.

The floods this year have killed 136 people and destroyed more than 4,000 homes in the worst-hit Balochistan province alone, the National Disaster Management Authority (NDMA) said on Sunday. 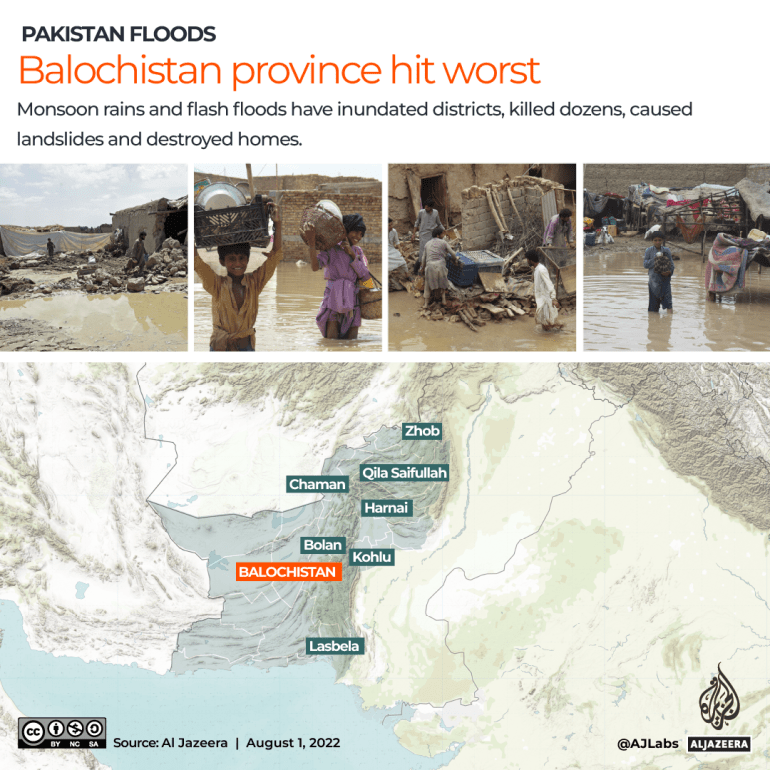 Prime Minister Shehbaz Sharif visited some flood-hit areas of the impoverished province on Saturday and is visiting other districts on Monday as well.

Sharif pledged government assistance to the people affected by the floods and announced the formation of four federal committees to assess the damage.

“The rains have not only affected Balochistan but the entire country and the governments are fully engaged with all available resources to rescue people and provide them relief,” Sharif said during his visit on Saturday.

Lasbela district, some 480km (298 miles) south of Quetta, is the worst hit district in Pakistan.

“We were helpless for three days but rescue teams with boats finally arrived in our village. There are still many people trapped and living on roofs and trees,” said Muhammad Umar, a resident of Lakhra village in the district.

Khalil Roonjha, a social activist in Lasbela, said hundreds of people are trapped in knee-deep waters and looking for government help.

“There aren’t any accessible roads towards the villages drowned by the floods. People are in dire need of assistance. The government should send aerial assistance,” he told Al Jazeera.

Pakistan is ranked eighth among counties most vulnerable to climate crisis despite contributing less than 1 percent of global carbon emissions, according to the Climate Change Risk Index 2021.

Afia Salam, a Pakistani environmental activist, told Al Jazeera that even the dry regions of the country are being hit by floods due to climate change.

“The government and non-profit organisations have the responsibility to spread climate change adaptation policies in the society but despite the weather unpredictability and serious global warming threats, we have not seen any serious measures by the government,” she said.

Khan Muhammad, 31, lost his house in Gandawa in the floods last week, forcing 20 of his family members to seek refuge in tents. He said people are compelled to drink contaminated water which could result in an outbreak of epidemic diseases in the area.

“The floods not only destroyed my house but even the food items – sugar and wheat we bought for the family – flowed into the water. We are without food and clean drinking water for the last three days and my children are living under the sky,” he told Al Jazeera.

“The prime minister visited some villages in Jhal Magsi but he did not come to Gandawa where thousands of people are homeless and looking for help.”