The fatal shooting of former Prime Minister Shinzo Abe has shocked Japan, a country with some of the world’s toughest gun-control laws.

Abe, Japan’s longest serving prime minister, was shot in the city of Nara during an outdoors campaign event on Friday, two days before an Upper House election.

The 67-year-old collapsed, visibly bleeding, and bystanders near the Yamato-Saidaiji station began to administer cardiac massage. He was then transferred to hospital by helicopter where doctors later pronounced him dead.

The shooting was especially “tragic and surprising”, given that Japan is one of the world’s safest countries, said Benoit Hardy-Chartrand, a professor at Japan’s Temple University.

“This is certainly not something we are used to seeing,” he told Al Jazeera. “We never have this kind of gun violence. [We have] one of the lowest rates of homicide in the world.” 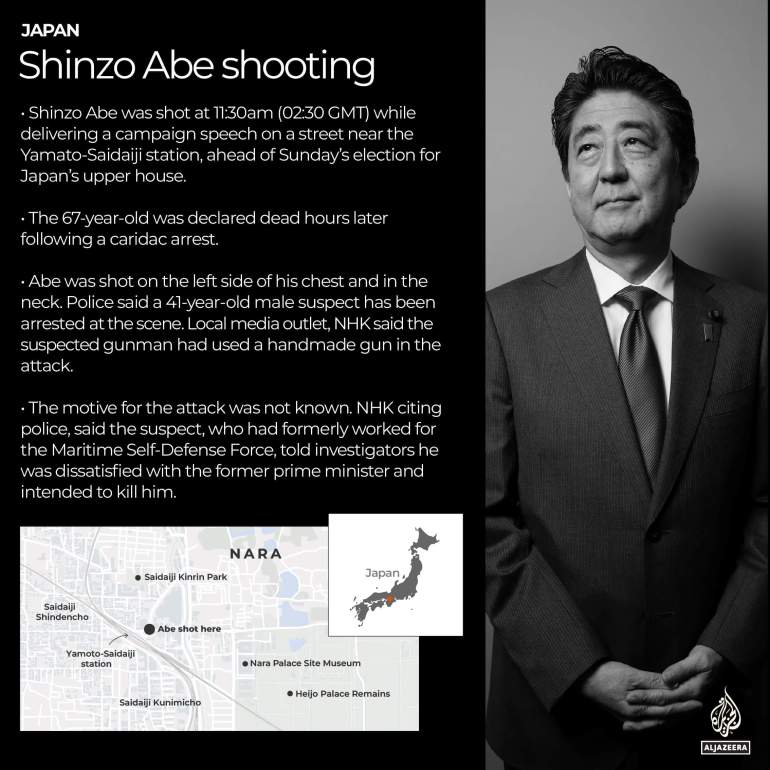 Firearms are strictly regulated in Japan, a country of some 125 million people. Annual deaths from guns are regularly in single figures, rarely exceeding 10 per year.

Getting a gun licence is a long and complicated process for Japanese citizens.

Japanese gun-ownership restrictions do not allow private citizens to have handguns.

Hunters and target shooters are permitted to own shotguns and air rifles, but licensed owners must attend classes, pass a written test and undergo a mental health evaluation and a background check.

The man arrested for shooting Abe reportedly used a “handmade” weapon. He is a former member of the Japanese military, according to local media.

Japan’s first arrest for possession of a homemade 3D firearm was in 2014.

“It is very shocking for the Japanese public. It is very rare that anybody in Japan has possession of handguns,” Tina Burrett, associate professor of political science at Sophia University in Tokyo and a visiting fellow at Cambridge University, told Al Jazeera.

“This seems to be an individual acting on his own impulses, but the fact that the gun is homemade is something that makes Japanese people feel a little bit more uncomfortable and afraid,” she added.

“The possibility of somebody manufacturing their own weapon is not something that we [often] see in Japan.”

Attacks on politicians are rare in Japan.

In 2007, the mayor of Nagasaki city, Iccho Ito, was shot and killed by a gangster – an incident that resulted in further tightening gun regulations.

Inejiro Asanuma, a leader of the Japan Socialist Party, was assassinated in 1960 during a televised political debate.

The last time a sitting prime minister was killed was in 1932, during Japan’s radical prewar militarism; Tsuyoshi Inukai was 76 at the time.

Leaders around the world have also reacted with shock and condemnation of the killing.

“This comes as a shock to everyone, especially considering the stature of the importance of Abe,” said Hardy-Chartrand, describing the late leader as “one of the most important post-war politicians for Japan”.