Russian forces have “succeeded in liberating” the Luhansk region in southeastern Ukraine, Sergey Shoigu told President Vladimir Putin in the Kremlin in a televised meeting.

Putin, visibly tired and poker-faced, uttered congratulations. He then said something that may have revealed the true price of taking over all of Luhansk, a region of eastern Ukraine that had been partially controlled by pro-Russian separatists since 2014.

“The military units that took part in active combat and achieved success, a victory in the Luhansk direction, must have a rest, boost their combat capabilities,” Putin said.

That was his admission of how spent and tired Russian forces were after more than two months of storming Luhansk, a top Ukrainian defence analyst said.

“These are very serious losses. That’s why Russians are withdrawing them, regrouping, deploying them to other directions,” Ihor Romanenko, former deputy chief of Ukraine’s general staff of armed forces, told Al Jazeera. 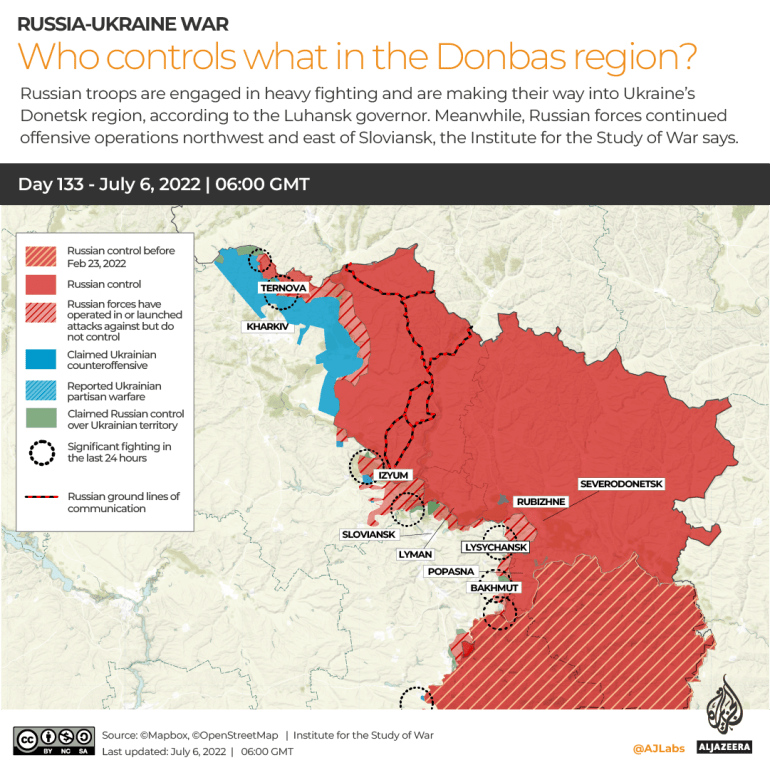 “The occupants threw, perhaps, all of their forces [to seize] Lysychansk,” said Luhansk governor Serhiy Haidai on Telegram, of the last Ukrainian-controlled city in the region to fall.

“They attacked the city with incomprehensibly cruel tactics,” he said adding that most administrative buildings in the city were razed to the ground.

“There is no sense in such a takeover. Russia didn’t get anything but desert after losing a huge amount of forces,” Pavel Luzin, a Russia-based military analyst with the Jamestown Foundation, a think-tank in Washington, DC, told Al Jazeera.

Moscow recognised the “independence” of separatist statelets in Luhansk and Donetsk two days before the invasion began, and Putin said in early April that their “liberation” was the Kremlin’s new top priority.

His announcement of the piecemeal partition followed his forces’ failure to encircle and enter Kyiv – and their withdrawal from all of northern Ukraine.

Ukraine-controlled areas of Luhansk were mostly farmland peppered with patches of forest and bisected by the Seversky Donets river that – under constant fire from the Ukrainian forces – proved lethally hard to cross.

The Russians succeeded in seizing Lysychansk only after pummelling Ukrainian positions with heavy artillery and trudging forward a kilometre (0.6 miles) or two a day at best.

They failed, however, to encircle a large group of Ukrainian troops only several kilometres south of Lysychansk, and the latter retreated – mostly on foot and under heavy fire – to the hills around the Donetsk cities of Seversk and Bakhmut.

And what lies ahead of the Russian army in Donetsk is much more complicated and perilous.

Russia is concentrating dozens of battalions for the upcoming assault, but “doesn’t have enough forces and reserves” given Kyiv’s success in other Ukrainian regions, expert Romanenko said.

Kyiv began a counteroffensive on the Russia-occupied parts of the central Kryvyi Rih region, the birthplace of Ukrainian President Volodymyr Zelenskyy.

Ukraine also seized several villages in Kherson, a key southern region adjacent to Russia-annexed Crimea that had been fully occupied in early March.

They also withdrew from one of the most symbolic and strategic hot spots in the Black Sea – the Zmiiny (Snake) Island next to the Danube Delta, where Ukrainian troops famously told a Russian warship to “go f-k itself” on the first day of the war.

“For them, it’s a dual process – on the one hand, to continue advancing in the Donetsk region, and on the other hand, not to let us de-occupy Kherson,” Romanenko said.

The main obstacle is, however, Ukraine’s inability to counter Russia’s combat potential – something that depends on boosting the military supplies from the West, he said.

Each HIMARS unit has six missiles that can hit targets up to 300 kilometres (186 miles) away with extremely high precision.

Ukraine’s defence minister hailed the supply of HIMARS, saying they have become the “best example” of Washington’s support to Kyiv.

“Probably the best example of this [support] is HIMARS, which became a game-changer at the front lines,” Oleksiy Reznikov tweeted on Monday, when Americans celebrated their Independence Day.

But the US specifically limited the HIMARS missiles’ range to 70 kilometres (43 miles), fearing that, otherwise, Ukraine would bomb targets in Russia.

Kyiv has already used HIMARS to effectively destroy several large ammunition stores in occupied or separatist-controlled areas. But Russian missiles have a range of up to 120 kilometres (75 miles) that largely renders HIMARS useless, Romanenko said.

“Stopping the enemy will only happen when the military potentials are equal. And that could only happen after massive supplies, not these spoonfuls,” he said.

However, Russia faces much bigger problems.

The Kremlin fears to announce a massive mobilisation, and the shortage of infantry, coupled with a limited use of aircraft, has hobbled Russia’s advancement.

Its military-industrial complex desperately needs sophisticated electronics that Russia is no longer able to manufacture, but Western sanctions stopped the supplies.

Zelenskyy’s government has failed to switch the economy to a wartime mode.

It does not offer additional welfare checks for civilians affected by the war, while there are no guaranteed jobs and markets for businesses working near the front lines, experts have said.

“The economy is simply surviving on central bank’s emissions, international aid and old stashes that are about to end,” Kyiv-based analyst Aleksey Kushch said.

“The government looks like a child that closed its eyes waiting for it all to end,” he told Al Jazeera.