Al Jazeera looks at the main events that marked the 22nd week of the war in Ukraine:

Ukrainian forces repel a Russian attack on Bohorodychne, a town in the teeth of the Russian advance in the eastern region of Donetsk. Russian forces need to take Bohorodychne to advance on Sloviansk and Kramatorsk, in the heart of the part of Donetsk still controlled by Ukraine. Russian forces may have secured Berestove, moving closer to their objective of Bakhmut, which is crossed by two logistics highways.

The Contact Group on the Defence of Ukraine meets for the fourth time and pledges undisclosed weapons deliveries.

The EU agrees to ban Russian gold and freezes the assets of Sberbank, Russia’s top lender, as part of a seventh set of sanctions. Russia is the world’s second-largest gold producer, making $15.45bn in sales last year.

In an interview with Russian newspaper Ria Novosti, Russian foreign minister Sergey Lavrov said Russia had departed from its shrunken official goal of occupying the two eastern regions of Luhansk and Donetsk, saying Zaporizhia and Kherson in the south are also important.

Ukrainian military intelligence reports that Russia is exporting stolen Ukrainian grain. Two Russian dry bulk carriers loaded with a total of 54,000 tonnes of such grain, the Matros Koshka and Matros Pozhynich, were reportedly refused entry in Beirut and were redirected to Latakia and Tartus in Syria. Ukraine says Russia plans to truck the stolen grain from there to buyers in the Middle East.

Russia shells settlements in Luhansk and Donetsk oblasts without making any significant advances. Ukraine’s general staff say their forces repulsed a Russian attack in the vicinity of the Lysychansk refinery, showing that Luhansk oblast is still not entirely under Russian control.

In the southern Kherson region, Ukraine says it has destroyed a Russian ammunition warehouse.

Ukrainian intelligence spokesman Kyrylo Skibitskyi says Ukraine estimates that Russia has used up 55-60 percent of its total pre-war stocks of Iskander, Kalibr and Kh-101 and Kh555 precision-guided missiles during the war in Ukraine. The Iskander are land-based ballistic missiles. The Kalibr are ship-launched cruise missiles. Kh-101 and Kh-555 are air-launched cruise missiles.

Ukraine’s general staff says the next British military aid package will include 50,000 rounds of howitzer shells, hundreds of drones and 1,600 anti-tank missiles.

Russian forces shelled the city of Sloviansk, says the military administrator of Donetsk oblast Pavlo Kirilenko. Still, they failed to make any advances towards it or Siversk, which is closer to the Russian front line.

Russia and Ukraine sign a UN-brokered agreement allowing the export of Ukrainian grain through the Black Sea. Ukrainian President Volodymyr Zelenskyy confirms an agreement has been reached allowing Ukraine to export last year’s and this year’s grain harvests. 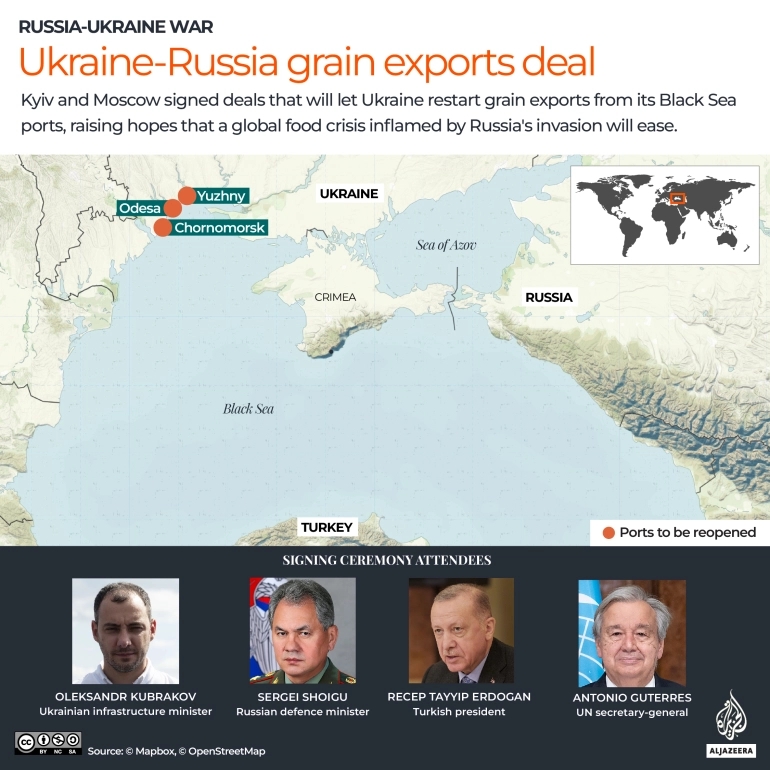 Ukraine’s military intelligence chief, Kyrylo Budanov, says fears that Russia might use thenaval corridor that was demined for grain exports to send a landing force to Ukraine were “absolutely unrealistic”.

“The coast is already protected by coastal missile complexes, which make such actions absolutely impossible,” Budanov says. “We do not see any threats from a military point of view. There is a developed fairway. Vessels will exclusively move along this fairway. No part of the coast, except for the indicated fairway, will be demined,” Budanov says.

Two Russian Kalibr cruise missiles hit the port of Odesa, one of several ports included in the international agreement on grain exports signed the previous day. Ukraine says it intercepted another two missiles.

Ukraine’s southern command says it has destroyed an ammunition depot and 54 anti-aircraft guns.

Ukraine’s military intelligence says Russia is preparing a new misinformation campaign about the bombing of the Mariupol theatre, the bloodiest atrocity of the war, in which hundreds of civilians were killed. Russia has reportedly invited film crews to record a narrative of how the theatre was filled with explosives and blown up from within.

Russian defence ministry officials say the attack on the port of Odesa only hit military targets. “In the seaport in the city of Odesa, on the territory of a shipyard, sea-based high-precision long-range missiles destroyed a docked Ukrainian warship and a warehouse with Harpoon anti-ship missiles supplied by the US to the Kyiv regime,” ministry spokesman Igor Konashenkov said.

Ukraine’s general staff say their forces repelled an attack in Verkhnokamyanka, Luhansk oblast, suggesting that Russian forces have not entirely secured the province. Russian ground forces make a failed attempt on Siversk, the town at the apex of the Russian salient. In neighbouring Donetsk, Wagner mercenaries reportedly take control of Novoluhanske, a town from which Ukrainian forces may have tactically withdrawn.

Ukraine’s general staff report that Russian commanders are responding to the sabotage of armoured vehicles – by troops who are unwilling to fight – by sending troops into battle without armour.

Ukraine’s agriculture minister, Mykola Solskyi, says Ukraine has $10bn worth of grain ready to export, and an additional $20bn worth of agricultural products that could be exported after that.

The head of military intelligence, Kirill Budanov, will also head the Intelligence Committee, formed on June 17 by presidential decree, to coordinate the activities of intelligence agencies.

Ukraine’s military intelligence says Russian military hospitals are swamped with the wounded from the front and cannot cope. It says Russia plans to send more medical personnel to occupied areas near the front lines.

Ukraine says Russia has restored high-tension power cables in occupied Kherson and is stealing Ukrainian electricity for use in Crimea. Ukraine cut the cables after Crimea’s annexation in 2015.

Luhansk governor Serhiy Haidai says Russian forces still haven’t managed to take all of the province, and fighting continues in villages close to the border with Donetsk. Russian forces make limited ground assaults towards Siversk, and northeast of Bakhmut.

Ukrainian air force spokesman Yuryi Ignat says US-supplied NASAMS medium-range anti-aircraft missile batteries have not yet been deployed. The US says it has supplied two such batteries.

Ukraine’s air force says four Kalibr cruise missiles were fired at Khmelnytskyi in western Ukraine and all four were shot down.

“The effectiveness of the use of air defence forces increases precisely due to the human factor,” says Ignat. “We are gaining experience that we did not have before, we are better organising the interaction between units, and this is a notification system, and target detection, and decision-making.”

Russian state company Gazprom says it will halve gas supply through the Nordstream 1 pipeline to 20 percent of capacity, or 33mcm a day. EU energy ministers agree to reduce the use of natural gas by 15 percent between August this year and March 2023.