Ukraine has said it hopes a United Nations-brokered deal aimed at easing global food shortages by resuming grain exports from the Black Sea region would start to be implemented this week.

Moscow brushed aside concerns that the deal could be derailed by a Russian missile strike on Ukraine’s port of Odesa on Saturday, saying it targeted only military infrastructure.

Ukraine’s President Volodymyr Zelenskyy has denounced the attack as “barbarism” that shows Moscow cannot be trusted.

A global wheat shortage and soaring European energy prices are some of the most far-reaching effects of Russia’s invasion of Ukraine, threatening millions in poorer countries with hunger and prompting fears in Europe over heating supplies this winter.

Russia and Ukraine signed agreements on Black Sea grain exports in Istanbul on Friday, with Turkey and the UN as co-guarantors.

The officials agreed there would be no attacks on ships moving through the Black Sea to Turkey’s Bosphorus Strait and on to markets. They said will set up a joint monitoring centre.

A senior Ukrainian government official said he hoped the first grain shipment from Ukraine, a major world supplier, could be made this week, with shipments from other ports mentioned in the deal within two weeks.

“We believe that over the next 24 hours we will be ready to work to resume exports from our ports. We are talking about the port of Chornomorsk. It will be the first, then there will be Odesa, then the port of Pivdeny,” Deputy Infrastructure Minister Yuriy Vaskov told a news conference on Monday.

“In the next two weeks, we will be technically ready to carry out grain exports from all Ukrainian ports,” Vaskov said.

Infrastructure Minister Oleksandr Kubrakov, who led Ukraine’s delegation at the grain talks in Turkey, highlighted the importance of security following the strike on Odesa’s port.

“Our position is very simple. We signed an agreement with the UN and Turkey. If the sides guarantee security, the agreement will work. If they do not, it will not work,” Kubrakov told a press conference.

“What that means is there could still be disputes in which the Russians are striking those ports and that could cause problems with that grain. But right now, both sides say that deal is going through and there is no limit to the amount of grain that can be shipped out of those three ports,” Hendren said. 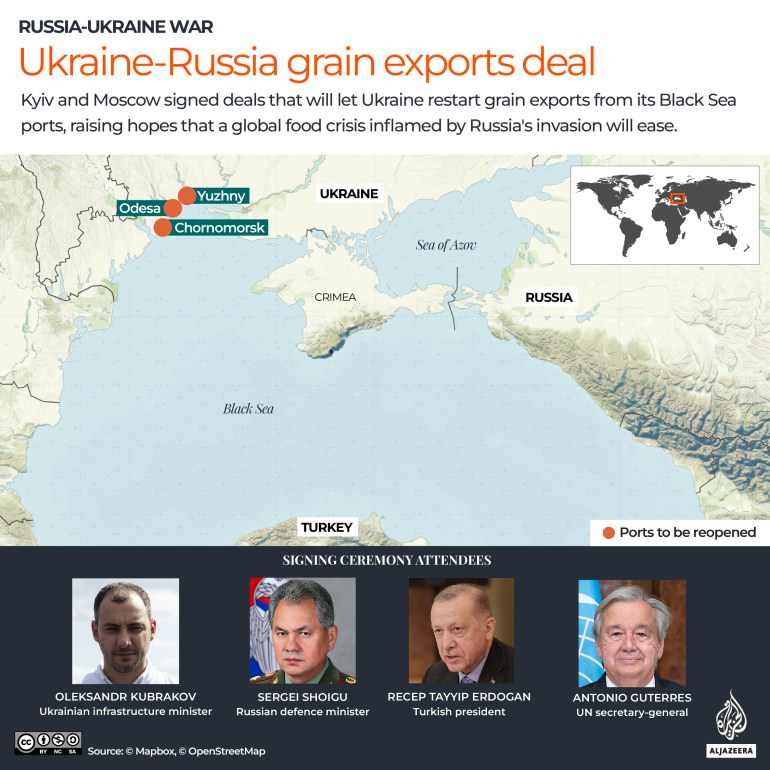 Russia’s Black Sea fleet has blocked grain exports from Ukraine since Moscow’s February 24 invasion. A UN official called Friday’s deal a “de facto ceasefire” for the ships and facilities covered in the agreement.

Moscow denies responsibility for the food crisis, blaming Western sanctions for slowing its food and fertiliser exports and Ukraine for mining the approaches to its ports. Under Friday’s deal, pilots will guide ships along safe channels.

Kubrakov added that de-mining will take place “exclusively” in the shipping lanes required for grain exports, while Ukrainian ships will accompany the departing convoys that will transport not only grain but also fertiliser.

Ukraine’s military said two Kalibr missiles fired on Saturday from Russian warships hit the area of a pumping station at Odesa port and two others were shot down by air defence forces. They did not hit the grain storage area or cause significant damage. 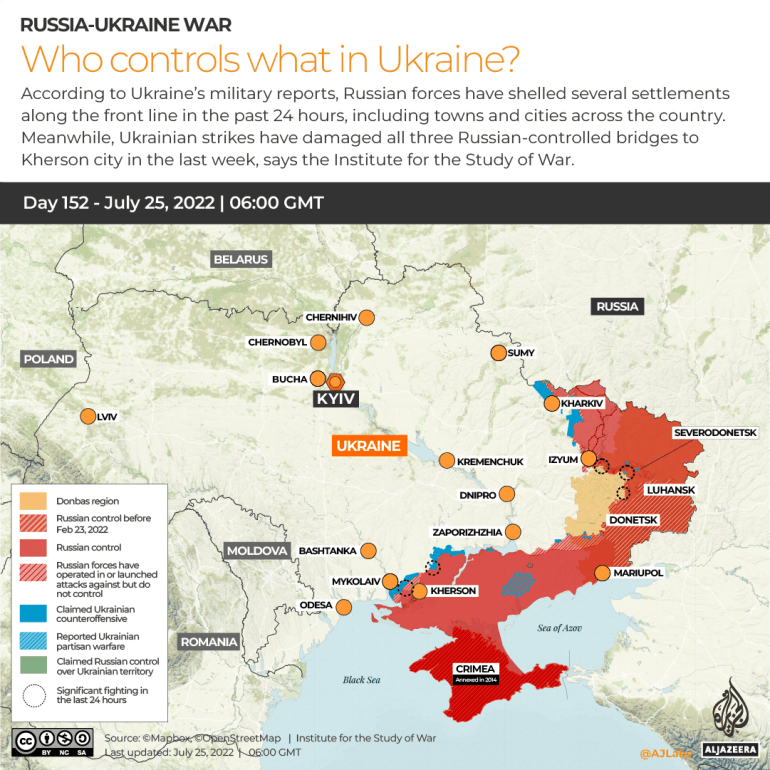 Russia said the strikes had hit a Ukrainian warship and a weapons store in Odesa with precision missiles.

“They are in no way related to infrastructure that is used for the export of grain. This should not affect – and will not affect – the beginning of shipments,” Kremlin spokesman Dmitry Peskov said on Monday.

Diplomats from the European Union, which has joined the United States in imposing sanctions on Russia but has continued to buy its gas, were set to discuss targets on Monday for member states to cut their gas use. Russia has reduced supplies to Europe, blaming the sanctions.

Peskov said the installation of a turbine repaired by Canada would enable gas to be supplied to Europe in “corresponding volumes”, adding that other repairs were needed to the pipeline, which was shut down for 10 days this month during maintenance.

Global wheat prices rose sharply on Monday due to uncertainty over the grain agreement, erasing most of the falls seen on Friday when traders had anticipated an easing of supply shortages.