The majority of Ukrainian refugees who have fled the Russian invasion plan to stay in their host countries until hostilities subside and the security situation improves in their country, a new survey by the United Nations’ refugee agency (UNHCR) has found.

“Sixty five percent of respondents reported planning to stay in their current host country and nine percent were planning to move to another host country within the next month,” said the report published on Wednesday.

The findings of the survey titled Lives on Hold: Profiles and Intentions of Refugees from Ukraine, is based on interviews with about 4,900 Ukrainian refugees in the Czech Republic, Hungary, Moldova, Poland, Romania and Slovakia between mid-May and mid-June 2022.

Still, the report said the majority of participants in the survey “expressed their hope to return to their home communities as soon as possible” but were worried about the “uncertainty about the future which impacted their ability to form secure long-term plans”. 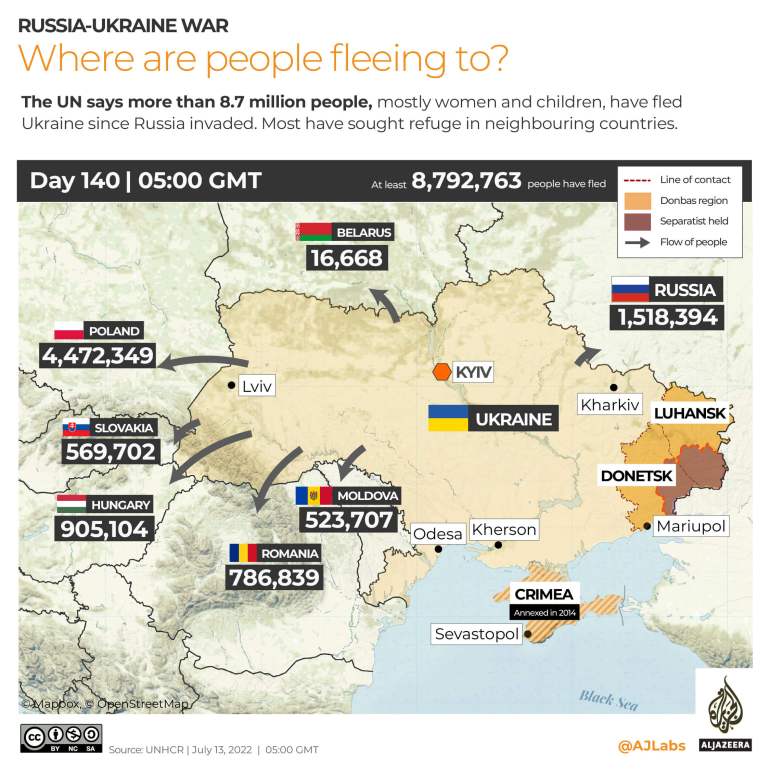 According to the report, about 16 percent plan to return to Ukraine in the coming two months, with 15 percent of those only planning to stay temporarily to visit family, get supplies or help relatives to evacuate.

Refugees’ plans varied according to their regions of origin, their host countries and the time since their displacement from Ukraine.

“A higher proportion of refugees from Kyiv and areas in the west were planning to return than those who arrived from the east and north,” said the report.

Russia launched a full-scale military invasion of Ukraine on February 24 as President Vladimir Putin demanded Kyiv’s army lay down its weapons. On Tuesday, the UN’s human rights office said more than 5,000 civilians had been killed since the invasion, noting, however, that the real death toll was likely much higher.

According to UNHCR, more than 8.7 million people have fled Ukraine since February 24. Many have sought refuge in neighbouring states. In March alone, almost 3.4 million Ukrainians fled their country.

Most of the arrivals have been women and children. All men aged between 18 and 60 have been asked to remain in Ukraine to fight.

A further eight million people have also been internally displaced, according to a study by the International Organization for Migration published earlier this year.