Russia’s foreign ministry has said it is suspending an agreement with Japan that allowed Japanese fishermen to fish near the disputed Southern Kuril islands, accusing Tokyo of failing to make payments required under the deal.

“In the current situation, we are forced to suspend the implementation of the 1998 Agreement until the Japanese side fulfils all its financial obligations,” Russian foreign ministry spokeswoman Maria Zakharova said in a statement on Tuesday.

Called the Kurils by Russia and the Northern Territories by Japan, the string of volcanic islands is at the heart of a decades-long feud between the two countries that has prevented them from signing a formal World War II peace treaty.

Moscow regards the strategic archipelago – which separates the Sea of Okhotsk and Pacific Ocean – as its own, while Tokyo says the four islands belong to Japan and were seized by the Soviet army in the final days of the war.

In October, Japan’s new prime minister, Fumio Kishida, said that Japan’s sovereignty extends to the four islands: Iturup, Kunashir, Shikotan and Habomai, which lie at their closest point just a few kilometres off the north coast of Hokkaido, the northernmost of Japan’s main islands.

The Kremlin denounced that claim.

Moscow’s announced suspension of the fishing agreement comes as Japanese and NATO officials agreed on Tuesday to step up military cooperation and conduct joint exercises amid shared concerns that Russia’s invasion of Ukraine is causing a deterioration of the security environment in Europe and Asia.

Japan also quickly joined the US and Europe in imposing sanctions against Russia, including freezing the assets of Russian officials and billionaires, restricting trade and investment, and providing support for Ukraine, following Moscow’s invasion in February. 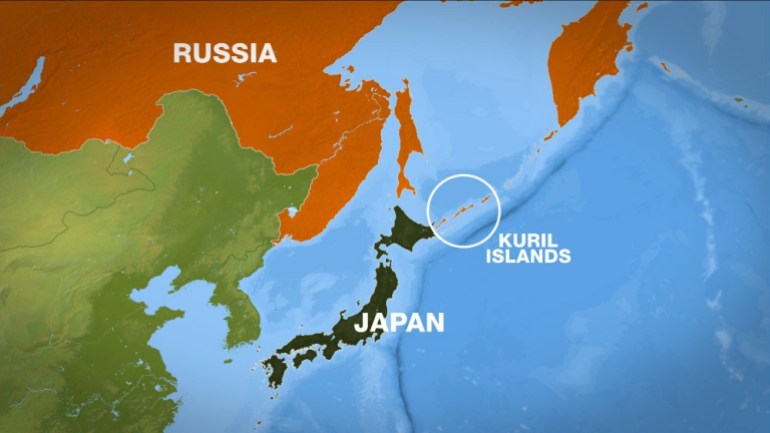 Japanese Defence Minister Nobuo Kishi said at the beginning of his meeting with NATO Military Committee Chief Rob Bauer on Tuesday that Japan hoped to strengthen ties with European countries and welcomes NATO’s expanded involvement in the Indo-Pacific region.

“The security of Europe and Asia are closely intertwined, especially now with the international community facing serious challenges,” Kishi said.

Bauer’s visit to Tokyo comes as Japan’s Maritime Self-Defence Force is participating in NATO naval exercises in the Mediterranean Sea.

Also on Tuesday, Japanese and US fighter jets conducted joint flight drills over the Sea of Japan “amid an increasingly severe security environment, such as North Korea’s repeated ballistic missile launches,” Japan’s Ministry of Defence announced.

The four islands at the centre of the dispute between Moscow and Tokyo are located to the southeast of the Russian island of Sakhalin and are administratively part of the same region.

Strategically, control of the islands ensures Russia has year-round access to the Pacific Ocean for its Pacific Fleet of warships and submarines based in Vladivostok, as the strait between the islands of Kunashir and Iturup does not freeze over in winter.

Russia has military bases on the archipelago and has deployed missile systems on the islands.

With a population of approximately 20,000 people, the islands are rich in hot springs and minerals and rare earth metals such as rhenium, which is used in the production of supersonic aircraft.