Authorities in Bangladesh are bracing for the spread of waterborne diseases and racing to get drinking water to people stranded in their homes by flooding across a quarter of the country, says an official.

Nearly 2,000 rescue teams were trying to reach flood victims in 17 of the country’s 64 districts and get them water and other supplies, Atiqul Haque, director general of the Department of Disaster Management, told Reuters news agency on Thursday.

“With the floodwaters receding, there is a possibility of an epidemic. We fear the outbreak of waterborne diseases if clean water is not ensured soon,” Haque said. “Ensuring availability of drinking water is our top priority.”

More than 3,400 people have been infected by various waterborne diseases due to the floods since June 18, the Directorate General of Health Services (DGHS) said on Wednesday.

More than 4.5 million people have been stranded and 42 killed in the nation’s worst flooding in more than 100 years. 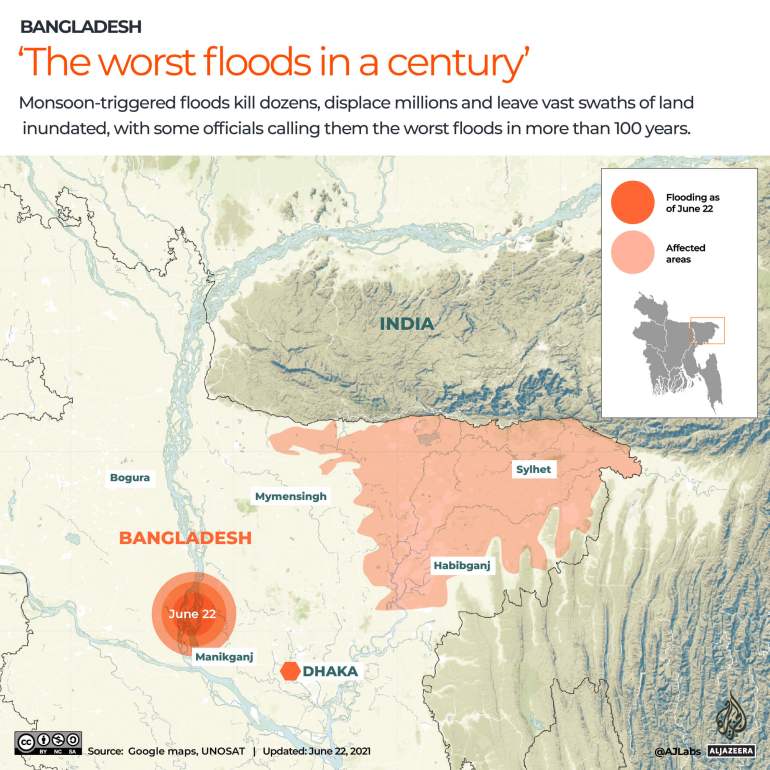 Al Jazeera’s Tanvir Chowdhury, reporting from Sharishakandi village in Sylhet region, said many people are still stranded and in desperate need of fresh food and water. Sylhet is among the worst affected, with several areas also without electricity.

“The UN’s children agency warns four million people, including 1.6 million children, in northeast Bangladesh have been cut off by floods and are without fresh drinking water, putting them at risk of waterborne diseases,” he said.

“We are making frantic efforts to ensure there is food and drinking water for all the affected people,” said Atiqul Haque, director general of Bangladesh’s Department of Disaster Management.

“The devastation is huge. More crops could be damaged as new areas are being flooded.”

Fatema Begum, a mother of three in the worst-hit Sunamganj district, said the floods had washed away everything.

“There is not even a trace,” she said of her small thatched hut. “We don’t even have a second pair of clothes. No one has come to help.”

The monsoon brings heavy rain and floods to South Asia between June and October, especially in low-lying countries like Bangladesh, where rivers swollen with waters pouring out of the Himalayas often burst their banks.

But extreme weather has become more frequent and environmentalists warn that climate change could lead to more serious disasters.

Saiful Islam, director of the Institute of Water and Flood Management at the Bangladesh University of Engineering and Technology, analysed 35 years of flooding data and found that rains were getting more unpredictable and many rivers were rising above dangerous levels more frequently than before.