Russian forces have pushed deeper into eastern Ukraine’s Donbas region, with Ukrainian officials announcing the fall of a front-line village near the strategically important cities of Severodonetsk and Lysychansk.

Roman Vlasenko, head of the Severodonetsk district military administration, said on Tuesday that the settlement of Toshkivka is now “controlled entirely by the Russians”.

Toshkivka had a pre-war population of about 5,000 people and is approximately 25km (15 miles) south of Severodonetsk in eastern Ukraine’s Luhansk region, which has for weeks been targeted by Moscow’s troops as they press for complete control of the Donbas.

Vlasenko said the battle for the war-torn territory is “now in full swing” and warned Luhansk, which together with the neighbouring Donetsk region forms the Donbas, had become the “epicentre” of fighting.

The Donbas battles have developed into a brutal war of attrition in recent weeks, with Moscow concentrating its overwhelming firepower on a Ukrainian-held pocket of the region that Moscow claims on behalf of its separatist proxies – the self-proclaimed Donetsk and Luhansk People’s Republics.

But despite their artillery advantage, some observers note that Russian forces have made slow progress in the Donbas since refocusing the offensive there in April.

The relentless fighting has seen both sides suffer heavy losses in one of the bloodiest land battles in Europe for generations. 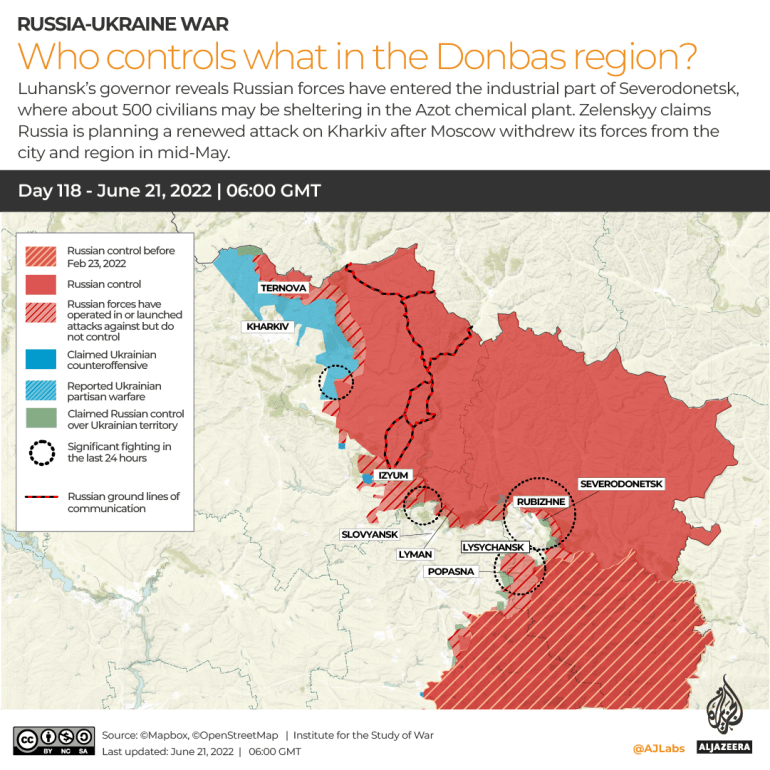 However, Ukrainian forces still hold some ground on the east bank, with Kyiv’s troops in control of part of an industrial zone on the outskirts of Severodonetsk, the hotspot of recent fighting.

Luhansk Governor Serhiy Haidai told the Associated Press news agency on Tuesday that Ukrainians continued to hold the Azot chemical plant despite heavy Russian bombardment. About 500 civilians are reportedly sheltering at the facility, including dozens of children, and fears for their safety are mounting.

Haidai said Russian troops were turning the area “into ruins” in a bid to take over Severodonetsk.

“It is a sheer catastrophe,” he told the AP. “Our positions are being fired at from howitzers, multiple rocket launchers, large-caliber artillery, missile strikes … today everything that can burn is on fire.”

Neighbouring Lysychansk, the only city in the Luhansk region that is still fully under Ukrainian control, has also been attacked.

Haidai said on Telegram that Russian shelling on Monday destroyed 10 high-rise buildings, private houses and a police station in the city.