Protesters in Poland have thrown red paint on Russia’s ambassador in protest against the war in Ukraine.

The incident on Monday occurred at a Warsaw cemetery dedicated to Red Army soldiers who died during World War II.

Ambassador Sergey Andreev arrived at the Soviet soldiers’ cemetery to lay flowers on Victory Day, which marks the defeat of Nazi Germany 77 years ago.

As he arrived at the Soviet Soldiers Cemetery in the Polish capital, Andreev was met by hundreds of activists opposed to Russia’s war in Ukraine.

Video footage shows red paint being thrown from behind Andreev before a protester standing beside him throws a big blob into his face.

The protesters prevented the ambassador and others from laying flowers at the cemetery.

The Russian ambassador to Poland was attacked during an attempt to lay flowers at the cemetery of Soviet soldiers in Warsaw & doused with red paint pic.twitter.com/9l8i6q79do

The protesters carried Ukrainian flags and chanted “fascist” and “murderer”, while some were dressed in white sheets smeared in red, symbolising Ukrainian victims of the war launched in February by Russian President Vladimir Putin. Other people in his entourage were also splattered.

Police arrived at the scene to help the ambassador and other members of his delegation get away.

Earlier in the day, the words “Kill Putin” were found written in blue and yellow, the colours of the Ukrainian flag, on a monument at the cemetery, private broadcaster TVN24 reported. The writing was later removed.

One protester interviewed by TVN24 said it was good the ambassador had been covered in red.

“With all our heart we are with Mariupol,” she said, referring to the southeastern Ukrainian city that has been devastated by the war.

More than three million Ukrainians have fled to Poland since the war started. 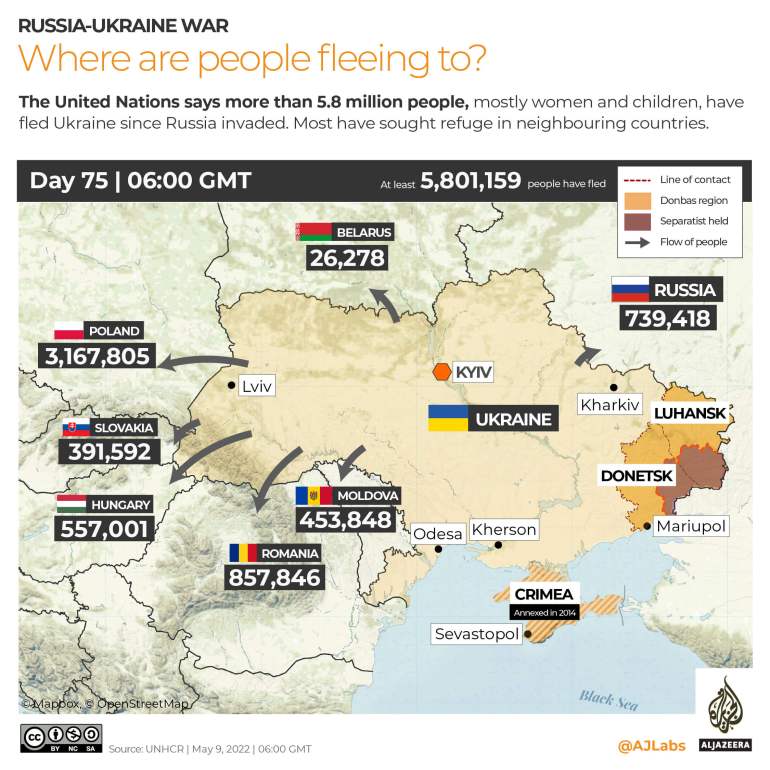 Andreev told reporters he and his team were not seriously hurt in the incident, TASS news agency reported.

“We will make a formal protest,” he said. “When they recommended that we not hold a larger event, we met them halfway, we didn’t aggravate the situation.”

The Soviet cemetery is set in a vast park on the route linking downtown to the international airport. It is the final resting place of more than 20,000 Red Army soldiers who perished fighting Nazi Germany.

While Poland has removed some monuments to the Red Army in the years after it threw off Moscow-backed communist rule, it has allowed the cemetery to remain undisturbed.

“In Warsaw, during the laying of a wreath at the cemetery of Soviet soldiers, an attack was carried out on the Russian ambassador to Poland, Sergey Andreev, and the Russian diplomats accompanying him,” Russian foreign ministry spokeswoman Maria Zakharova said on Telegram.

“The admirers of neo-Nazism have again shown their faces,” she said, repeating Russia’s assertion it is fighting neo-Nazis in Ukraine.

Protesters also marched in Warsaw to protest the war, bringing a tank on a tractor and parking it in front of the Russian embassy on Sunday evening.

Since the war began on February 24, images of Ukrainian tractors hauling Russian tanks away have been symbols of Ukrainian resistance.

Poland, home of the Solidarity trade union that played a key role in bringing down communism in central and eastern Europe, has long had a tense relationship with Russia and is an advocate of tough sanctions against Moscow over its invasion of Ukraine.