Russia appeared to become bogged down in a new military deadlock in eastern Ukraine during the 10th week of its war, as its forces made incremental advances but failed to score any significant breakthroughs.

At the same time, Russia attempted to prepare to annex the regions it holds economically and administratively, while the United States prepared to approve massive amounts of new military funding for Ukraine and the European Union readied itself to ban Russian oil.

Since it launched a second phase of the war on April 18 focusing on the eastern Donbas region, Russia’s lack of spectacular progress has been noted by analysts.

Although Russia has put hundreds of Ukrainian anti-aircraft systems and drones out of action, Ukraine still controls the majority of its airspace, the UK says.

The Institute for the Study of War is also unimpressed by the second phase. “Russian attacks on Ukrainian defensive positions along the pre-February 24 front lines continue to fail to make substantial progress,” it said on May 1.

“Repeated Russian failures to capture villages such as Zolote and Vilne suggest that pre-invasion Ukrainian defensive positions are too strong for Russian troops to storm.”

Russia has even failed to dislodge some 2,000 Ukrainian marines from Mariupol’s Azovstal plant, even though it formally declared victory over the city on April 21.

“When the Russians entered Afghanistan they were seen as a huge empire. Ten years later they were defeated and scattered. I believe the Americans are trying to achieve the same scenario here,” he told Al Jazeera.

“If the war lasts, say, another five years, the Russian economy will collapse. The Americans are not in a hurry, nor are the Europeans. Economically Russia is weak. Their economy is the size of South Korea’s.” 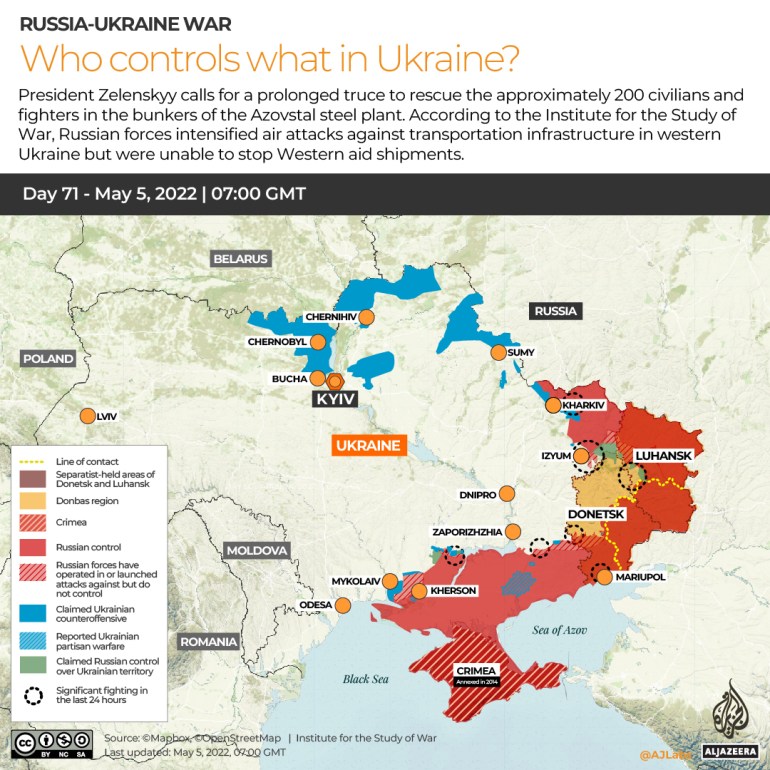 In the short term, at least, Moscow has been showing economic resilience, spending lavishly to prop up its economy.

Central bank spending has brought the rouble back to prewar value. Finance Minister Anton Siluanov said the equivalent of $35bn had been spent on initial tax breaks. Another $112bn is to be spent propping up the banking system by subsidising mortgages and business loans.

For now, Russia is spending a windfall. Its 37 percent rise in government spending in March was offset by increased revenues in global oil and gas prices.

The long term may be a different story. US President Joe Biden has asked Congress to approve $33bn in new spending for Ukraine, dwarfing a previous $13.6bn package and demonstrating US long-term resolve.

Europe, too, is working on eliminating its greatest weakness – dependence on Russian oil and gas. Russian coal imports were banned in earlier sanctions. Now the EU is focusing on oil and the biggest EU economy, Germany, has moved past a recent bout of indecision.

On May 2, that officially changed. “With coal and oil, it is possible to forego Russian imports now,” Finance Minister Christian Lindner and leader of the Free Democrats told the WELT newspaper. Habeck, who leads the Greens, confirmed that position.

“Germany is not against an oil ban on Russia. Of course it is a heavy load to bear but we would be ready to do that,” Habeck told reporters in Brussels before entering talks with his EU colleagues.

Germany says it has reduced its reliance on Russian oil since the invasion of Ukraine from 35 percent to 12 percent. 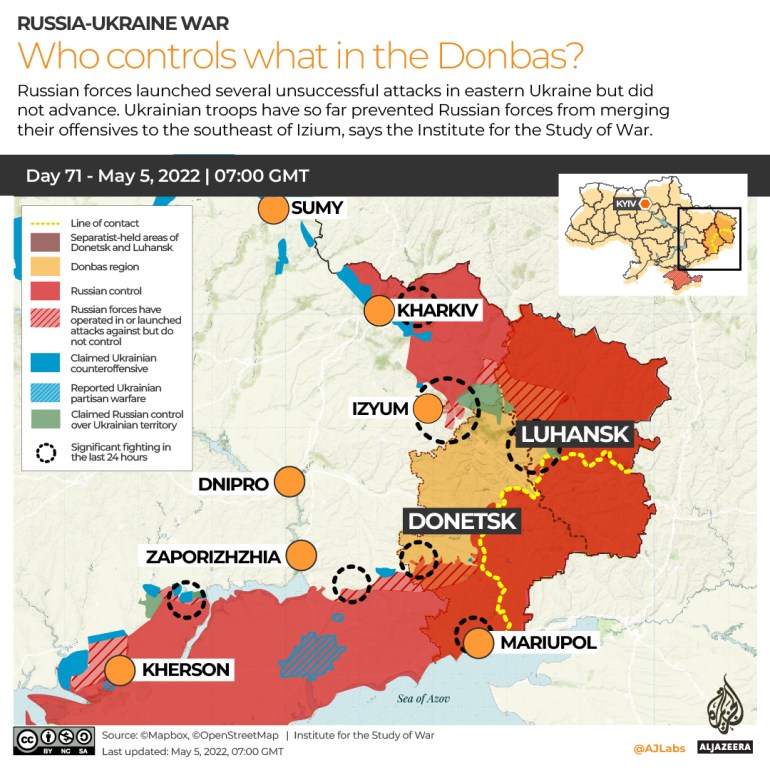 Scholz signalled a historic policy shift in March, declaring colossal new defence spending and a weaning off of Russian fossil fuels over time. “It seems that under the pressure of public opinion, the policy shift has been accelerated with regard to both issues,” says George Pagoulatos, director of the Hellenic Institute of European and Foreign Policy, a think-tank in Athens.

“It has been deemed important for Germany to be able to maintain its political capital and its position as a country of influence on the Western decisions that will be taken regarding the Ukrainian war and how to deal with Putin.

“This change of policy was important so Germany would not end up being marginalised in the Western camp,” Pagoulatos told Al Jazeera.

The decision, he said, was primarily to protect German interests and its standing in the world.

“It doesn’t make a huge difference if Germany provides heavy equipment in the overall military balance, because this equipment can be provided by other countries, but it makes a difference in terms of the attacks Germany is receiving from the inside and the outside, and in terms of it becoming more vulnerable politically. It was a pragmatic decision,” Pagoulatos said.

Germany’s shift leaves just two naysayers to an EU embargo on Russian oil, Slovakia and Hungary.  But a challenge to European unity should lead to a new lurch forward in federalisation, said Italy’s leader. In a speech to the European Parliament, Italian Prime Minister Mario Draghi called for a “pragmatic federalism” in which majorities of member states can override vetoes.

Even as sanctions were set to tighten and its eastern ground war proved as hard a slog as its failed effort to take the capital Kyiv, Russia was reportedly preparing to annex the Luhansk, Donetsk and Kherson oblasts, which it almost entirely controls.

Vadym Skibitskyi of the Ukrainian defence intelligence agency said Russia was planning to hold a sham referendum and declare Kherson independent by May 9 – the anniversary of Russia’s victory over Nazi Germany in World War II.

Businesses in Rostov, Russia, had received orders to produce seals and stamps for Mariupol’s occupation administrations saying, “Russia, the Republic of Donbas, Mariupol, the military-civil administration”. The intelligence agency said Russia is considering integrating occupied areas of southern Ukraine into the administration of Crimea, which it annexed in 2014. 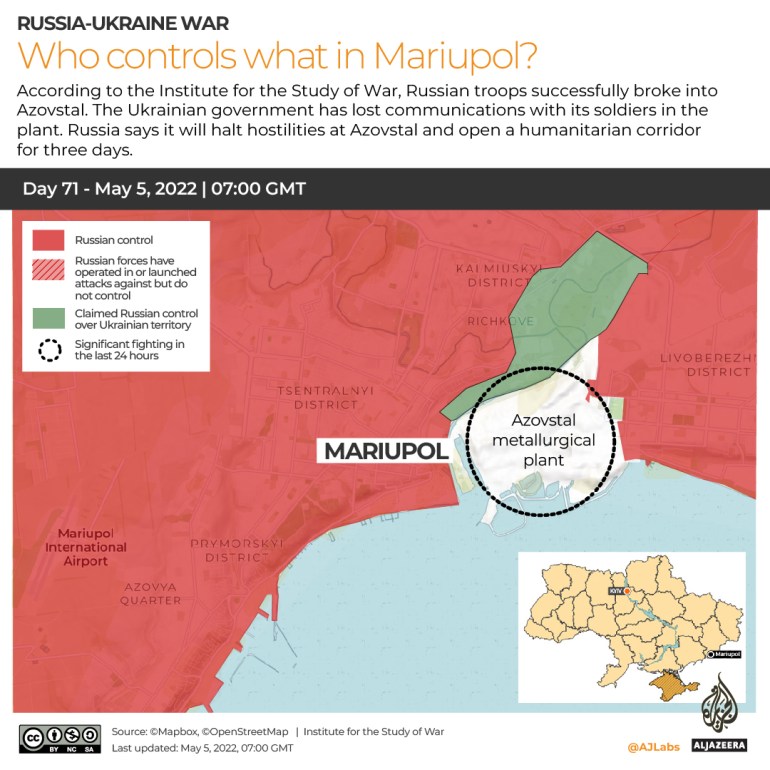