Russia has bombarded railway stations and other supply-line points as it accused Western countries of “stuffing Ukraine with weapons”.

Air raid sirens sounded in cities across the country on Wednesday night, and missile fire followed in Cherkasy and Dnipro in central Ukraine and Zaporizhzhia in the southeast. In Dnipro, the mayor said one strike hit the city’s centre. There was no immediate word on casualties or damage.

The UK’s defence ministry said on Wednesday that Russia continues to hit non-military targets in Ukraine including residential properties and transport hubs in a bid to weaken the country’s resolve.

In a regular military intelligence update, the UK also said that despite Russian ground operations focusing on eastern Ukraine, missile strikes continued across the country as Moscow sought to hamper Ukrainian re-supply efforts.

“As Russian operations have faltered, non-military targets including schools, hospitals, residential properties and transport hubs have continued to be hit, indicating Russia’s willingness to target civilian infrastructure in an attempt to weaken Ukrainian resolve,” the update, posted on Twitter, said.

“The continued targeting of key cities such as Odessa, Kherson and Mariupol highlights their desire to fully control access to the Black Sea, which would enable them to control Ukraine’s sea lines of communication, negatively impacting their economy.”

Heavy fighting also raged on Wednesday at the Azovstal steel mill in Mariupol that represented the last pocket of Ukrainian resistance in the ruined southern port city, according to the mayor. But a Russian official denied Moscow’s troops were storming the plant, as Ukrainian commanders had claimed a day earlier. 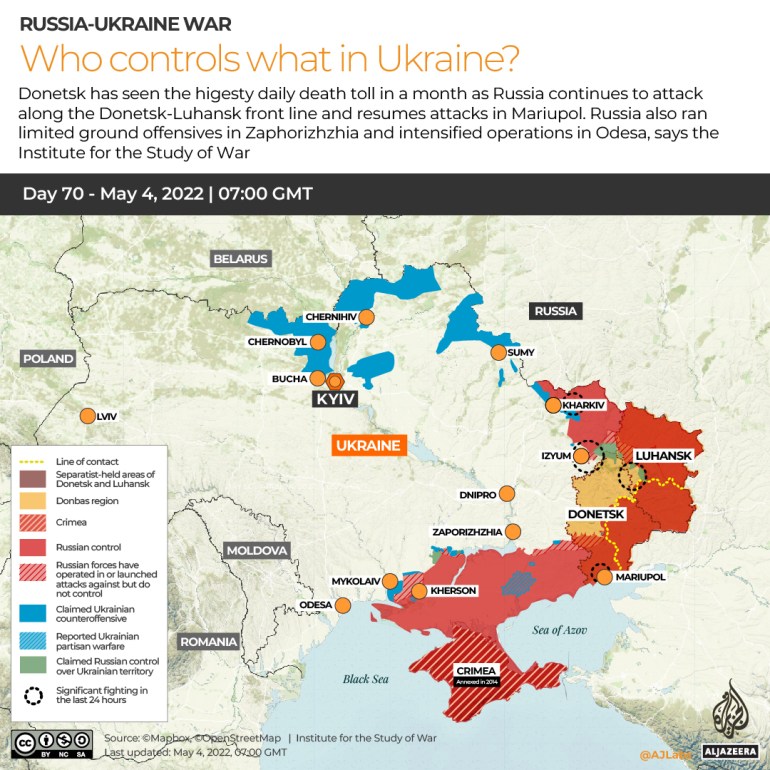 Russia published what it said was video footage of two Kalibr cruise missiles being launched from the Black Sea and said they hit unspecified ground targets in Ukraine.

The flurry of attacks comes as Russia prepares to celebrate Victory Day on May 9, marking the Soviet Union’s defeat of Nazi Germany. The world is watching for whether Russian President Vladimir Putin will use the occasion to declare a victory or expand what he calls a “special military operation”.

A declaration of all-out war would allow Putin to introduce martial law and mobilise reservists to make up for significant troop losses.

Meanwhile, Belarus, which Russia used as a staging ground for its invasion, announced the start of military exercises Wednesday. A top Ukrainian official said the country will be ready to act if Belarus joins the fighting.

A senior US defence official, speaking on condition of anonymity to discuss the Pentagon’s assessment, said that while the Russians have tried to hit critical infrastructure around the western city of Lviv, specifically targeting railroads, there has been “no appreciable impact” on Ukraine’s effort to resupply its forces.

Lviv, close to the Polish border, has been a major gateway for NATO-supplied weapons. 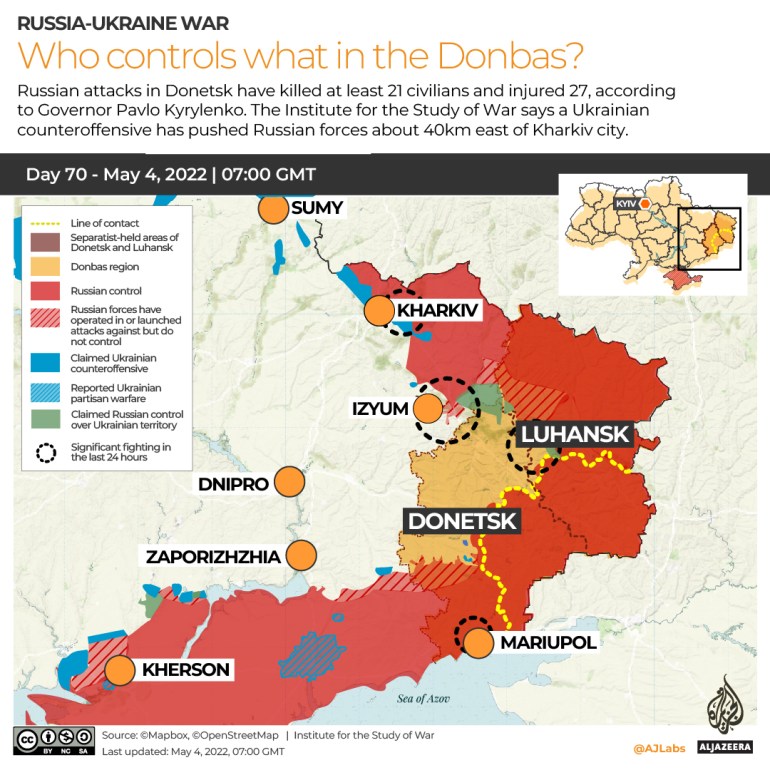 Weaponry pouring into Ukraine helped its forces thwart Russia’s initial drive to seize Kyiv and seems certain to play a central role in the growing battle for the Donbas, the eastern industrial region that Moscow now says is its main objective.

Ukraine has urged the West to ramp up the supply of weapons ahead of that potentially decisive clash. Chancellor Olaf Scholz of Germany, which had been slow at first to help arm Ukraine, said his government is considering supplying howitzers, in addition to Gepard anti-aircraft guns and other equipment it has agreed to send.

The governor of the eastern Donetsk region, which lies in the Donbas, said Russian attacks left 21 people dead on Tuesday, the highest number of known fatalities since April 8, when a missile attack on the railway station in Kramatorsk killed at least 59.

In addition to supplying weapons to Ukraine, Europe and the US have sought to punish Moscow with sanctions. The EU’s top official called on the 27-nation bloc on Wednesday to ban Russian oil imports.