Russian forces in a “frenzied push” have seized half of the eastern Ukrainian city of Severodonetsk that is key to Moscow’s efforts to quickly complete the capture of the industrial Donbas region, the mayor told The Associated Press.

“The city is essentially being destroyed ruthlessly block by block,” Oleksandr Striuk told The Associated Press on Tuesday. He said heavy street fighting continues and artillery bombardments threaten the lives of the estimated 13,000 civilians still sheltering in the ruined city that once was home to more than 100,000 people.

It is impossible to track civilian casualties amid the round-the-clock shelling, said the mayor, who believes that more than 1,500 residents have died of various causes since Russia invaded Ukraine in late February. Evacuation efforts from Severodonetsk have been halted because of shelling.

“Civilians are dying from direct strikes, from fragmentation wounds and under the rubble of destroyed buildings, since most of the inhabitants are hiding in basements and shelters,” Striuk said.

Electricity to the city has been cut off and people need water, food and medicine, the mayor said: “There are food supplies for several more days, but the issue is how to distribute them.”

A Moscow-backed separatist leader quoted in a TASS news agency report said earlier on Tuesday that Russian forces had taken control of about a third of the city, but that they were not advancing as rapidly as might have been hoped.

“But we want, above all, to maintain the city’s infrastructure,” he said.

Regional governor Serhiy Haidai told Ukrainian state television on Tuesday that Russian troops are slowly advancing towards the centre of the city, but said Ukrainian troops defending Severodonetsk were not at risk of being encircled as they could retreat to Lysychansk across the river. 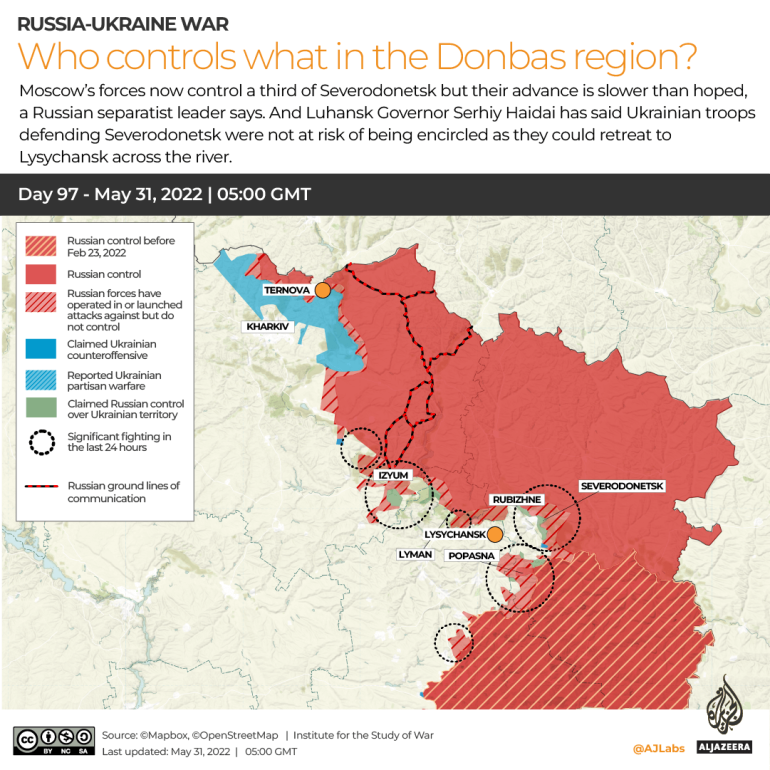 Military analysts described the fight for Severodonetsk as part of a race against time for the Kremlin. The city is important to Russian efforts to quickly complete the capture of the eastern industrial region of the Donbas before more Western arms arrive to bolster Ukraine’s defence.

“The Kremlin has reckoned that it can’t afford to waste time and should use the last chance to extend the separatist-controlled territory because the arrival of Western weapons in Ukraine could make it impossible,” The Associated Press quoted Ukrainian military analyst Oleh Zhdanov as saying.

Luhansk was recognised as independent by Russia when Moscow launched its invasion of Ukraine on February 24, although Kyiv and its Western allies consider it part of Ukraine. Russia has been pressing to seize the entire Donbas region, consisting of the Luhansk and Donetsk regions which Moscow claims on behalf of separatist proxies.

A 32-year-old French journalist, Frédéric Leclerc-Imhoff, died on Monday near Severodonetsk when he was hit by shrapnel from shelling while covering Ukrainian evacuations, according to his employer, French broadcaster BFM TV.