Rescue workers in Nepal have recovered 20 bodies from the crash site of a small plane that went down with 22 people on board.

“Efforts are under way to bring the bodies to Kathmandu,” Teknath Sitaula, a spokesman for the capital’s Tribhuvan International Airport said.

Deo Chandra Lal, a spokesman for Nepal’s Civil Aviation Authority, said on Monday the search for the others was continuing.

“The weather is very bad but we were able to take a team to the crash site. No other flight has been possible,” he said.

There were 19 passengers and three crew members on board the Twin Otter aircraft, operated by Nepali carrier Tara Air, when it went missing on Sunday.

They included four Indians, two Germans, and 16 Nepalis, according to the airline and government officials.

The plane took off from the tourist town of Pokhara at 9:55am (0410 GMT) on Sunday, and was bound for Jomsom, a popular pilgrimage site about 80km (50 miles) to the northwest of Pokhara.

It was on a 20-minute scheduled flight, but lost contact with the airport tower close to landing in an area of deep river gorges and mountaintops. 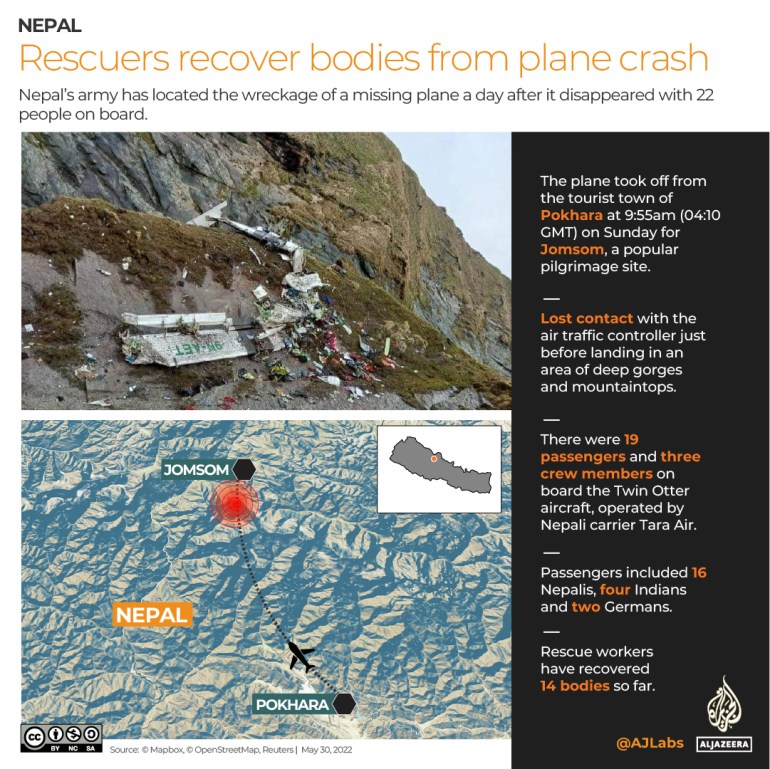 Weather and darkness had halted the search overnight, but an army helicopter and private choppers resumed the search on Monday morning.

Narayan Silwan, a spokesperson for the army, later posted a picture on Twitter of the wreckage with the plane’s tail number visible and parts of the aircraft shown scattered on the edge of a mountain.

Nepal, home to eight of the world’s 14 highest mountains, including Everest, has a record of air accidents. Its weather can change suddenly and airstrips are typically located in mountainous areas that are hard to reach.

In early 2018, a US-Bangla Airlines flight from Dhaka to Kathmandu crashed on landing and caught fire, killing 51 of the 71 people on board