Russian forces fought their way into the centre of Severodonetsk from the north and south despite fierce resistance on Monday as ground troops attempted to seize the strategic city in eastern Ukraine.

The Ukrainian military also said that Russian forces were reinforcing their positions on the city’s outskirts and bringing additional equipment and ammunition into the area to press their offensive.

“Unfortunately we have disappointing news, the enemy is moving into the city,” Luhansk Governor Serhiy Haidai told national television. “The fighting continues, the situation is very difficult.”

Severodonetsk – with a prewar population of about 100,000 people – is one of several important urban hubs that lie on Russia’s path to capturing the entire Luhansk region, a key objective of Moscow’s military.

“Russian troops have entered the city and street fighting is going on,” Severodonetsk Mayor Oleksandr Striuk told The Associated Press, adding Ukrainian defenders were fighting fiercely to push the Russians out.

“The Russian troops have advanced a few blocks toward the city centre. We have no power and no communications. The city has been completely ruined,” said Striuk.

About 13,000 civilians left in the city are sheltering in basements and bunkers to escape relentless Russian bombardment. “The number of victims is rising every hour, but we are unable to count the dead and the wounded amid the street fighting,” Striuk said.

About 1,500 residents of the city have died since the start of the war, he said.

Severodonetsk, the largest city that Kyiv still partly controls in the Luhansk region of the Donbas, has been the focus of Russia’s attacks in recent weeks.

‘Those who attack die’

Haidai said the neighbouring city of Lysychansk was still under Ukrainian control, while the main road into the two cities has been shelled but not blocked.

“They [Russian army] use the same tactics over and over again. They shell for several hours – for three, four, five hours – in a row and then attack. Those who attack die. Then shelling and attack follow again, and so until they break through somewhere,” Haidai said.

Two civilians were killed and five wounded by Russian shelling on Monday, he added.

Severodonetsk’s critical infrastructure was destroyed and 60 percent of damaged residential buildings cannot be restored, the governor said. He added three doctors in the area were reported missing after their vehicle was discovered badly damaged.

About one million people have been left without water supplies in the region, said Haidai.

Having failed to take the capital Kyiv in the early phase of the war, Russia is seeking to consolidate its grip on the Donbas, large parts of which are already controlled by Moscow-backed separatists.

Unlike in the previous stages of the war, which Moscow calls a “special military operation” to demilitarize Ukraine and rid it of nationalists threatening Russian-speakers there, Russia has concentrated its firepower on a small area.

Russian forces earlier said they captured Lyman, a smaller town and former railway hub in the area, and are ramping up pressure on Severodonetsk and its sister city Lysychansk.

“Capturing Severodonetsk is a principal task for the occupation force,” Zelenskyy said, adding “the Russians don’t care about casualties”.

He also suggested other regions of Ukraine should be able to establish close ties with Russia once their military gains are consolidated. 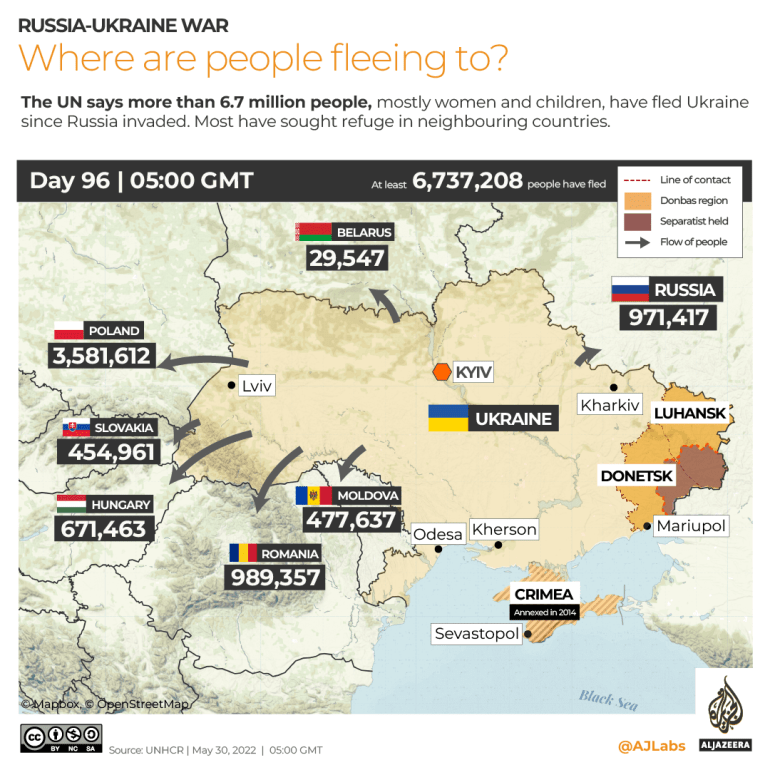 The deteriorating conditions raised fears that Severodonetsk could become the next Mariupol, a city on the Sea of Azov that spent nearly three months under Russian siege before the last Ukrainian fighters surrendered.

Severodonetsk, 143km (89 miles) south of the Russian border, has emerged in recent days as the epicentre of Moscow’s quest to capture all of Ukraine’s eastern industrial Donbas region. Severodonetsk and Lysychansk span the strategically important Siverskyi Donetsk River, and are the last major areas under Ukrainian control in Luhansk province.

Zelenskyy, meanwhile, visited soldiers in Kharkiv, where Ukrainian fighters pushed Russian forces back from nearby positions several weeks ago.

“I feel boundless pride in our defenders. Every day, risking their lives, they fight for Ukraine’s freedom,” he wrote on the Telegram messaging app after the trip.

Russia has kept up its bombardment of the northeastern city from afar, and explosions could be heard shortly after the president’s visit.

While one-third of the northeastern region remains under Russian control, “We will for sure liberate the entire area,” Zelenskyy pledged.

In the south, Ukrainian forces pushed back on the weekend, forcing Russian troops into “unfavourable positions” around the villages of Andriyivka, Lozovo and Bilohorka in Kherson, the country’s military leadership said in a statement.

“Kherson, hold on. We’re close!” Ukraine’s general staff tweeted as forces counterattacked in the only region of the country fully controlled by Russian troops.

Kherson, which borders Crimea, was taken by Russian forces in March and Moscow-backed officials in the region have recently pushed for annexation.

While limited in nature, the attack could have the effect of stretching Russian forces with the general staff claiming the move forced Moscow to send reserves to the area.

Meanwhile, the UK defence ministry said on Monday that Russia appears to have suffered devastating losses among mid- and junior-ranking officers, raising the prospect of weaker military effectiveness. Brigade and battalion commanders were probably deploying to the most dangerous positions while junior officers have had to lead low-level tactical actions, the ministry said on Twitter in its latest intelligence update.

“With multiple credible reports of localised mutinies amongst Russia’s forces in Ukraine, a lack of experienced and credible platoon and company commanders is likely to result [in] a further decrease in morale and continued poor discipline,” it said.

No immediate response from Russia’s military to the assessment was available.