Twitter appears to be going private, leaving dissidents in the Middle East and North Africa concerned that a safe space to speak freely, amid various forms of state censorship, is about to disappear.

Under the prospective ownership of Tesla CEO Elon Musk, the popular social media app is expected to undergo changes.

But turning Twitter into a private venture with no oversight means some of these changes are bound to restrict the safety and privacy of users, effectively silencing them, activists and experts say.

Along with making algorithms open-source and defeating the controversial issue of bots, the billionaire entrepreneur, who reached a buyout deal with Twitter Inc. last week, has also pledged to “authenticate all humans”.

“No matter how you spin it, this will exclude certain users of the platform,” Jillian York, director for international freedom of expression at the Electronic Frontier Foundation (EFF), told Al Jazeera. 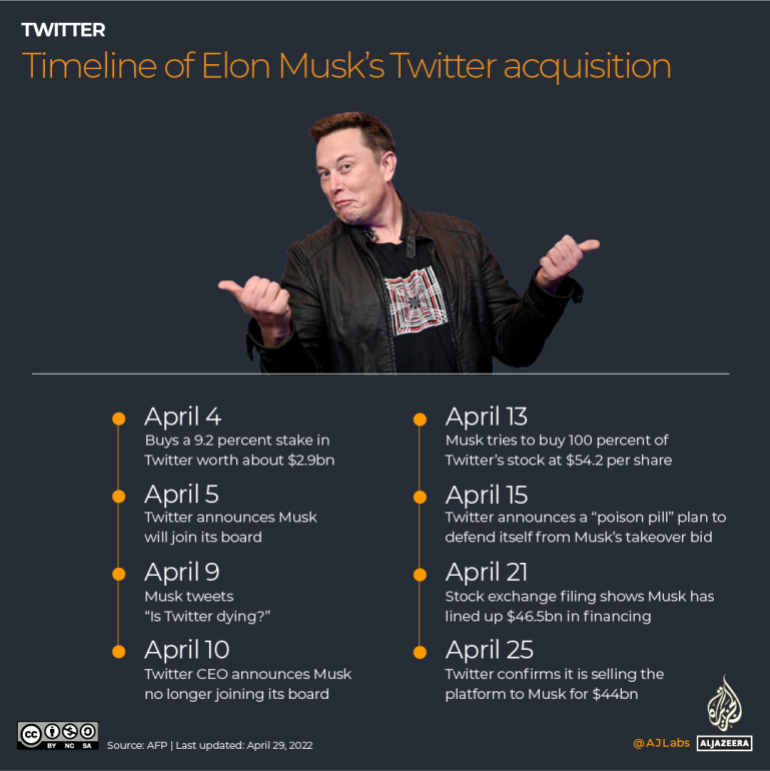 Many have questioned how the self-proclaimed “free-speech absolutist” plans to go about verifying the identity of human users and whether it would force anonymous users to reveal their real identities.

If “authenticating all humans” includes de-anonymisation, it is “sure to have a profoundly negative impact on pro-democracy movements across the globe”, Kareem Rifai, a Syrian-American pro-democracy activist, told Al Jazeera.

“De-anonymisation makes it dangerous or impossible for opposition activists living under dictatorial regimes to safely criticise their oppressors,” Rifai said.

What does ‘authenticating all humans’ mean?

Authenticating human users is a process that can be done in various ways.

Wael Alalwani, a digital rights advocate and data scientist, explained it could range from “ticking a CAPTCHA box … all the way to uploading official documents and personal photos”.

Regardless of how it’s done, both York and Alalwani agree there is “absolutely” cause for concern.

While authentication was mentioned as a “solution” to the flourishing bots and spam presence on Twitter, Alalwani believes these “can’t be solved by authentication per se”.

Combatting bots in a linear manner may lead to unintended consequences, that do not serve the long-term objective, he said, adding that Twitter users who tweet anonymously against repressive governments will be the first segment affected if they end up revealing their identity.

York agrees. “A user who tweets anonymously against a repressive regime … would have to weigh their physical safety against the importance of their work – a choice they shouldn’t have to make,” she said.

“I would like to see bots gone, as Musk said, but I’ll still not be happy if anonymous accounts were not allowed any more”, a Cairo-based Twitter user whose pseudonym is The Big Pharaoh, told Al Jazeera.

The Big Pharaoh, who has been blogging anonymously since 2004, is known for their strong stance against the Egyptian government. They have nearly 75,000 Twitter followers.

They say their anonymity stems from “security concerns”, but also because their blog – also The Big Pharaoh – has become synonymous with their pseudonym.

Clamping down on dissent

In their earlier days, platforms like Twitter and Facebook provided activists with the means to organise and amplify their demands, essentially becoming key tools that played a role in kickstarting some of the Arab Spring uprisings of 2011.

In the few years leading up to the revolutions, dissenting voices who had been blogging anonymously since the early 2000s found a wider audience on Twitter as the platform’s popularity skyrocketed after 2008.

In a political climate that did not allow independent media to thrive, local activists like The Big Pharaoh were finally able to offer an alternative view that resonated with millions of people.

This was also the case for Mahmoud Salem, an Egyptian cybersecurity analyst who authored the blog Rantings of a Sandmonkey. In 2005, Salem started blogging anonymously in a bid to fuel debate on social and political issues at home and in the region.

He later turned to Twitter and now shares his thoughts with more than 176,000 followers.

Salem says it was “super important” to be able to tweet anonymously in the lead up to the Egyptian uprising, especially in terms of “not confusing the message with the messenger”.

Tweeting anonymously, he explained, meant that you were stripped of any labels or affiliations.

Salem, eventually revealed his identity in February 2011, after he said he was almost killed by the police, who briefly detained him for participating in a protest in downtown Cairo.

According to Salem, if Twitter decides to force users to relinquish personal information under Musk, it will be the “end of online anonymous activism”, suggesting that users may start to move elsewhere, with the encrypted messaging app Telegram being “the most obvious option”.

Salem believes it may also be the end of “fake accounts, and by extension Twitter users’ growth”, casting doubt on whether the new feature will be implemented at all.

The formerly anonymous activist now “sporadically” blogs using his real name, but no longer lives in Egypt. “It made sense to leave”, he said, after his friends and business partners all “ended up arrested or exiled”.

In recent years, Egypt has launched an unprecedented crackdown on the media, imprisoning dozens and occasionally expelling foreign journalists.

In 2019, it introduced tighter restrictions that allow the state to block websites and social media accounts for “fake news” or incitement.

And just last week, in Syria, where President Bashar al-Assad’s government violently repressed what began as a peaceful uprising in 2011, amendments were made to existing cybercrime laws that would imprison Syrians for up to 15 years for criticising the regime.

Despite Twitter becoming a haven for hate speech and disinformation over the years, anonymous users have still been able to speak freely without fearing immediate reprisals.

To better shield and support anonymous users, The Big Pharaoh said Twitter should continue to “protect the privacy of users”.

Salem agreed. “If such a process exists, then there needs to be a mechanism that prevents Twitter from sharing said information,” he said.

Otherwise, Twitter may be aiding regimes in extending their repressive practices to digital spaces, too.

Alalwani warns that knowing the real identities of activists could “augment the mass-surveillance activities applied by governments with the support of the new Twitter”.

While Twitter has historically handed user data to foreign governments in response to legal requests, it has done so carefully and, at times, “fought back when they deem such requests to be unjust”, York said.

However, Musk has so far given no indication that he has a sense of the issue.

In a tweet published on Tuesday, Musk says: “By ‘free speech’, I simply mean that which matches the law.”

He continues: “I am against censorship that goes far beyond the law. If people want less free speech, they will ask government to pass laws to that effect.”

The statement alarmed activists, who cross the free speech boundary set by their respective governments and guarded by Musk, and indicates “their data could be easily shared with the government to enforce the law”, Alalwani said.

Instead of the app being in the hands of a sole private owner with huge infamous influence, ways of “collective governance, co-ownership, and data ownership should be discussed”, he suggested.