Moscow is ready to make a “significant contribution” to averting a looming food crisis if the West lifts sanctions imposed on Russia over Ukraine, President Vladimir Putin has said.

During a call with Italy’s Prime Minister Mario Draghi on Thursday, Putin said Moscow would move to overcome “the food crisis through the export of grain and fertiliser on the condition that politically motivated restrictions imposed by the West are lifted,” according to a Kremlin readout of the conversation.

It added that Putin also spoke about the “steps taken to ensure the safety of navigation, including the daily opening of humanitarian corridors for the exit of civilian ships from the ports of the Azov and the Black Sea, which is impeded by the Ukrainian side”.

Ukraine is one of the world’s largest exporters of wheat, corn and sunflower oil, but the war and a Russian blockade of its ports have halted much of that flow, endangering world food supplies. Many of those ports are now also heavily mined.

Russia also is a significant grain exporter, and Kremlin spokesman Dmitri Peskov said the West “must cancel the unlawful decisions that hamper chartering ships and exporting grain.” His comments appeared to be an effort to lump the blockade of Ukrainian exports with what Russia has said are its difficulties in moving its own goods.

Western officials have dismissed those claims. US Secretary of State Antony Blinken noted last week that food, fertiliser and seeds are exempt from sanctions imposed by the US and many others — and that Washington is working to ensure countries know the flow of those goods should not be affected.

With the war grinding into its fourth month, world leaders have ramped up calls for solutions.

“This food crisis is real, and we must find solutions,” World Trade Organization Director-General Ngozi Okonjo-Iweala said on Wednesday at the World Economic Forum meeting in Davos, Switzerland. 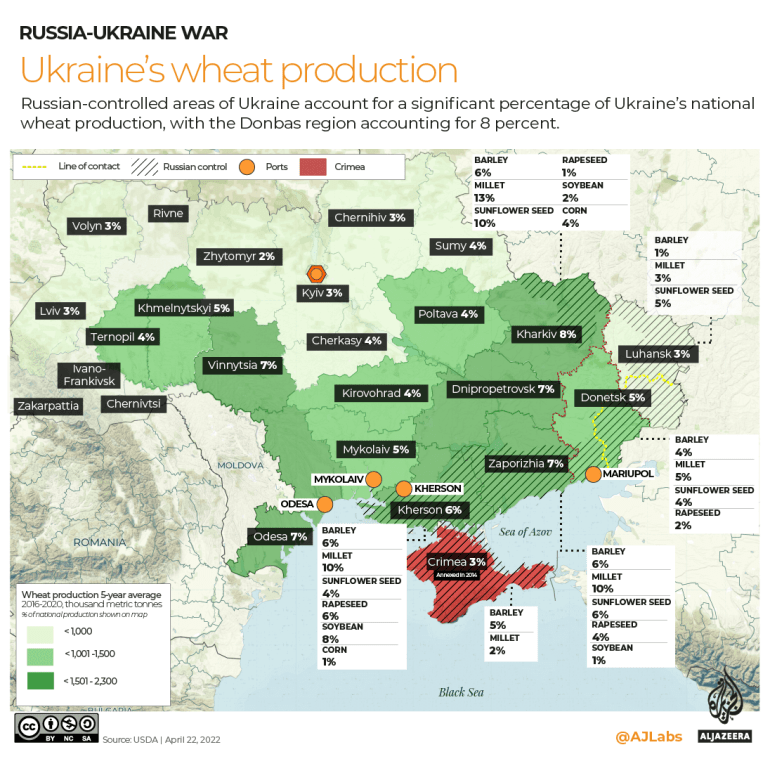 European countries have tried to ease the crisis by bringing grain out of the country by rail — but trains can carry only a small fraction of what Ukraine produces, and ships are needed for the bulk of the exports.

The Russian defence ministry has proposed a corridor to allow foreign ships to leave Black Sea ports and another to allow vessels to leave Mariupol on the Sea of Azov.

Mikhail Mizintsev, who heads Russia’s National Defence Control Centre, said 70 foreign vessels from 16 countries are in six ports on the Black Sea, including Odesa, Kherson and Mykolaiv. He did not specify how many might be ready to carry food.

Ukraine expressed scepticism about the Russian proposal. Foreign Minister Dmytro Kuleba said his country was ready to agree on safe corridors in principle — but that it was not sure if it could trust Russia.

He said the issue was how to ensure that “Russia will not violate the agreement on the safe passage and its military vessels will not sneak into the harbour and attack Odesa.”

British Foreign Secretary Liz Truss said Putin was “trying to hold the world to ransom” by demanding some sanctions be lifted before allowing Ukrainian grain shipments to resume.

“He’s essentially weaponised hunger and lack of food among the poorest people around the world,” Truss said. “What we cannot have is any lifting of sanctions, any appeasement, which will simply make Putin stronger in the longer term.”