Ukrainians in the eastern Donbas region besieged by Russian forces have reported indiscriminate attacks on civilian infrastructure as the invasion reaches its most intensified phase.

Russia is trying to take full control of the Donbas region, comprised of the two self-proclaimed rebel republics of Donetsk and Luhansk, whose independence is recognised by Moscow.

Outside the city of Severodonetsk – now the focal point of Moscow’s offensive in the Donbas – fighting was “very difficult”, said Luhansk regional governor Serhiy Haidai.

But the industrial centre has yet to be surrounded, he said in a video posted to Telegram.

Predicting the “coming week will be decisive”, Haidai added the city was being subjected to a “colossal amount of shelling” by Russian troops attempting to batter it into submission.

One war-displaced civilian from Severodonetsk who escaped described the situation there to Al Jazeera as “horrible”.

“People who have left just have a suitcase and no money – with nowhere to go,” Olena said.

According to Ukraine’s military, Russian troops shelled more than 40 towns in the Donbas on Wednesday, destroying or damaging 47 civilian sites, including 38 homes and a school.

“As a result of this shelling five civilians died and 12 were wounded,” the Joint Task Force of Ukraine’s armed forces said on Facebook. 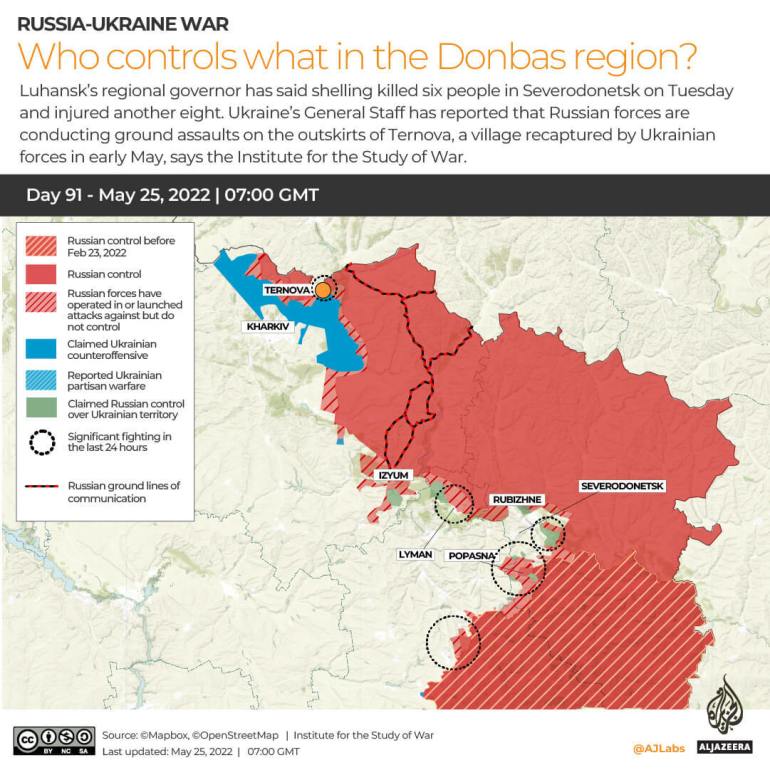 Civilians caught in the war-ravaged eastern city of Kramatorsk – where Russian forces were accused of killing 50 people and wounding 100 others in a rocket attack on the railway station – spoke of what Ukrainian officials have described as the Russian military’s “scorched-earth” tactics.

“As we say in Ukraine, nowhere is safe. The Russians just hit everything, they don’t care,” resident Eugine, 13, told Al Jazeera, while standing at the site of a building destroyed by Russian forces.

Gennady, a retiree, said his five-year-old grandson and five-month-old granddaughter had “fortunately left” the war-torn city.

“My son-in-law just buried my daughter. If something happens to him, his children, my grandchildren, won’t have parents,” he said.

Russia has repeatedly said it is conducting a “special military operation” in Ukraine to protect it from fascists, an accusation Kyiv and its Western allies say is baseless.

Ukraine has accused Russian forces of targeting civilians and engaging in war crimes, accusations Russia rejects. Earlier this week, a 21-year-old Russian tank commander was jailed for life this week after being found guilty of war crimes for killing an unarmed civilian.

“Ukrainian armed forces, our intelligence, and all those who defend the state are resisting the extremely fierce offensive of Russian troops in the east,” he said.

“In some areas, the enemy is significantly outnumbering us with equipment and soldiers. Russian authorities have made a demonstrative decision. They have allowed the hiring of older people for contract service. So they no longer have enough young people. But the desire to fight still remains.”

Ukrainian prisoners of war held in the Russian-backed self-proclaimed Luhansk and Donetsk “people’s republics” number about 8,000, Luhansk official Rodion Miroshnik was quoted by TASS news agency as saying on Thursday.

“There are a lot of prisoners. Now the total number is somewhere in the region of 8,000. That’s a lot and literally hundreds are being added every day,” Miroshnik said.

The leader of Russian-backed separatists in the breakaway Donetsk region called for the military operation in the Donbas region to be accelerated, the RIA Novosti news agency reported.

Denis Pushilin, head of the Donetsk People’s Republic, said Kyiv had blocked water supplies to key cities in the north of the region and called for military action to be stepped up.

Meanwhile, police in Lysychansk city were burying the bodies of civilians in mass graves, with about 150 in one site alone in one district, Haidai said.

Families of the people buried would be able to carry out a reburial after the war, and police are issuing documents enabling Ukrainians to secure death certificates for loved ones, he said.

Al Jazeera’s Assed Baig in Kramatorsk contributed to this report