The battles being fought in eastern Ukraine could determine the country’s fate, a defence ministry spokesman has said, as Russian forces were conducting an all-out assault to encircle Ukrainian troops in twin cities straddling the Siverskyi Donets River in eastern Ukraine.

Ukrainian Defence Ministry spokesman Oleksandr Motuzyanyk said Russian forces had not given up attempts to cross the river.

“Now, we are observing the most active phase of the full-scale aggression which Russia unfolded against our country,” he told a televised briefing on Tuesday. “The situation on the [eastern] front is extremely difficult, because the fate of this country is perhaps being decided [there] right now.”

The easternmost part of the Ukrainian-held Donbas pocket, the city of Severodonetsk on the east bank of the river and its twin Lysychansk on the west bank, have become the pivotal battlefield there, with Russian forces advancing from three directions to encircle them.

“The enemy has focused its efforts on carrying out an offensive in order to encircle Lysychansk and Severodonetsk,” said Serhiy Haidai, governor of Luhansk province, where the two cities are among the last territory still held by Ukraine.

“The intensity of fire on Severodonetsk has increased by multiple times, they are simply destroying the city,” he said on TV, adding about 15,000 people were living there.

Further west in Sloviansk, one of the biggest Donbas cities still in Ukrainian hands, air raid sirens wailed on Tuesday but the streets were still busy, with a market full, children riding bikes and a street musician playing the violin by a supermarket.

Haidai said Ukrainian forces had driven the Russians out of the village of Toshkivka just south of Severodonetsk. Russian-backed separatists said they had taken control of Svitlodarsk, south of Bakhmut. Neither report could be independently confirmed.

The push in the east comes three months after Russian President Vladimir Putin ordered troops into Ukraine in what he described as a “special military operation” to “de-nazify” the country. Ukraine’s western allies say the invasion is a war of aggression. 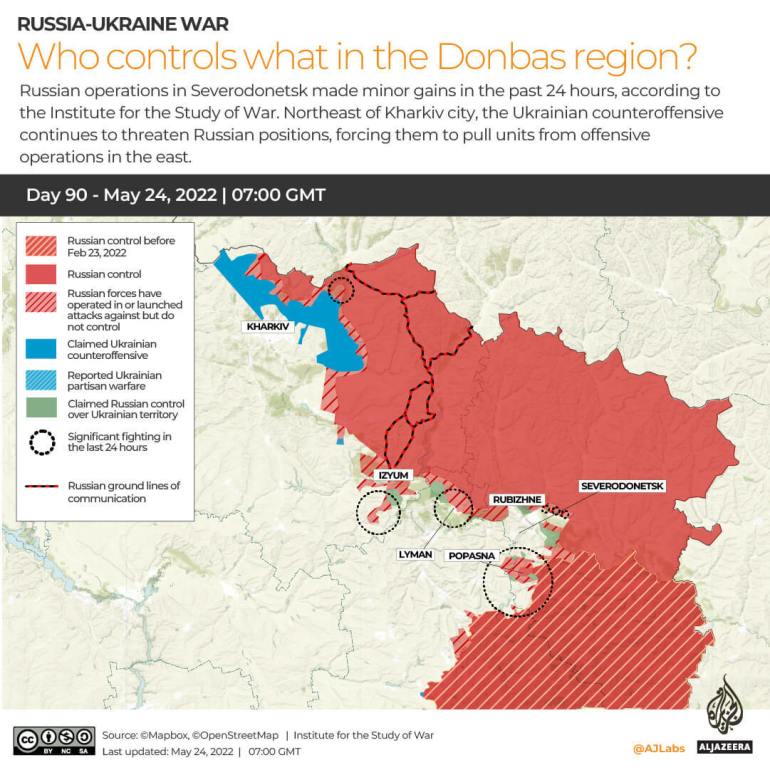 As well as the battles in the east, Ukraine’s southern region has become a focal point for Russian forces, which control swaths of territory including the city of Kherson.

Al Jazeera’s Dorsa Jabbari, reporting from Moscow, said recent developments in Kherson, where Russia has installed a new administration and started introducing the Russian rouble as a currency, showed a potential indication of “what things could look like” in the future in other parts of the country occupied by Moscow’s forces.

“There is a request to have a Russian military base be permanently stationed in that area,” Jabbari said, citing the deputy head of the Russia-backed administration that has been put in place in Kherson. “[And] as of Monday the Russian currency – the rouble – is now being used in Kherson, the Russian language has been recognised as one of the official languages in the region, alongside Ukrainian.”

But while the offensive is now pressing deep into the east and south, it has also suffered substantial setbacks. In what was Ukraine’s biggest military success so far, Russian forces retreated from around the capital Kyiv in March. The country’s second-largest city Kharkiv, which has suffered one of the war’s heaviest bombardments is slowly resuming its normal activities after Russian soldiers were pushed largely out of artillery range.

Three months into a war that some Western experts predicted Russia would win within days, Moscow still has only limited gains to show for its worst military losses in decades, while much of Ukraine has suffered devastation. Approximately 6.5 million people have fled abroad, uncounted thousands have been killed and cities have been reduced to rubble.

Speaking on Tuesday to global business leaders attending the World Economic Forum (WEF) in Davos, Switzerland, Ukraine’s President Volodymyr Zelenskyy said that five billion euros ($5.4bn) a month were needed to rebuild the country, while he urged his audience to fully cut trade with Russia.

The EU’s Commission Chief Ursula von der Leyen pledged 10 billion euros ($10.7bn) of microfinancial assistance in what she said was an “economic relief operation with no precedent in recent history”. 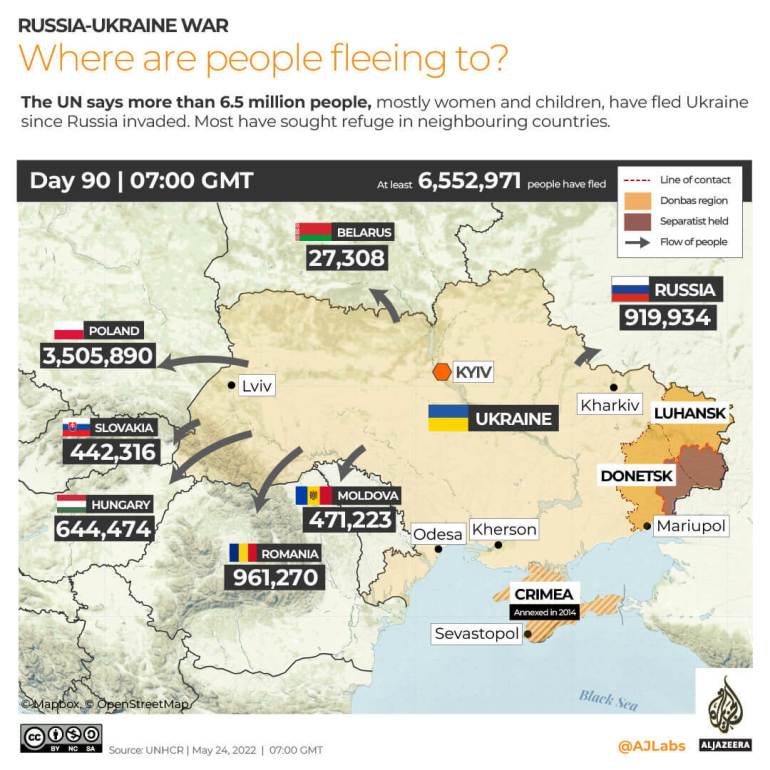 But the European block has not found a common voice concerning an embargo on Russian oil with Hungary still showing its opposition. In a letter signed May 23 and published on Tuesday, Hungarian Prime Minister Viktor Orban addressed the president of the European Council saying that the embargo should not be discussed at next week’s summit of the bloc’s leaders. Earlier in the day, von der Leyen said she hoped to secure the oil embargo within “days”.

The EU commission chief also touched upon the war’s massive international ramifications, including growing food shortages and soaring prices in developing countries that import Ukrainian grain. She called for talks with Moscow on unlocking wheat exports now trapped in Ukraine because of a Russian blockade in the Black Sea.

“It can’t be in Russia’s interests that because of Russia people are dying of hunger in the world,” von der Leyen told the Reuters news agency on the side of the WEF. “Therefore, I think we should first of all look at the dialogue with Russia, whether there is not an agreement that this wheat gets out of Ukraine.”