Kyiv, Ukraine – For many Ukrainians, the Azov Battalion servicemen are the 300 Spartans.

Their resistance thwarted Moscow’s advance in Ukraine’s south and east the way the Spartans helped put an end to the Persian conquest of Greece more than 2,500 years ago.

For almost three months, they repelled Russian attacks on the subterranean maze of Soviet-era bomb shelters and service tunnels under the Azovstal steel plant in Mariupol.

Resembling a giant film set for a post-apocalyptic movie, Azovstal occupies 11 square kilometres (4.25 square miles) and remained the only Ukrainian stronghold in the Azov Sea port where Russian shelling killed tens of thousands of civilians, according to Ukrainian officials.

Russian President Vladimir Putin said in late April that his forces would stop trying to seize Azovstal – and would instead blockade it so “a fly doesn’t fly through”.

But the attacks went on and on with strategic bombers, heavy artillery strikes, drones, tanks and infantry even though hundreds of Mariupol civilians found shelter in Azovstal.

The Azov Battalion communicated with the outside world via their Telegram channel, where they posted videos of the assaults and photos of heavily wounded fighters, and urged the government to find a way to evacuate them.

The West was mesmerised by their stamina.

“Like heroism generally, such brave last stands appeared to belong to the past, legend or even myth,” Bloomberg’s columnist Andreas Kluth wrote on April 21.

And only the lack of water, food, medical care and ammunition forced the Azov fighters to come out and surrender to separatist and Russian forces earlier this week.

They were promptly whizzed away to the rebel-controlled “People’s Republic of Donetsk” several kilometres north of Mariupol.

‘Get the boys back home’

Kyiv insists the Azov servicemen will be swapped for Russian prisoners of war (POWs) – and their rescue is an absolute national priority.

“Ukraine needs the Ukrainian heroes to be alive,” President Volodymyr Zelenskyy said in a video address on Tuesday. “We keep on working to get the boys back home, and this work needs a delicate approach. And time.”

But that may prove difficult, because the war’s post-apocalyptic poster boys are seen in a totally different light in the Kremlin and on Russian national television.

To Moscow, the Azov fighters are the “Nazis” and “ultranationalists” who imposed their ideology on all of Ukraine and spearheaded the “genocide” of Russian-speaking Ukrainians.

Some Azov fighters were indeed ultranationalists and white supremacists who volunteered to fight against the separatists in 2014.

Their ideology and alleged torture of POWs prompted the US Congress to ban them from using US military aid in 2018.

“I am very pleased that the recently passed omnibus prevents the US from providing arms and training assistance to the neo-Nazi Azov Battalion fighting in Ukraine,” Congressman Ro Khanna told The Hill, a US publication.

Azov’s leaders toned down their message as they formed a political party and tried to enter Ukraine’s mainstream politics.

But for Russian propagandists, they remained evil incarnate.

“They profess a fusion of paganism and German occultism, in essence, Satanist rituals, including human sacrifice, the cult of blood, marches with torches,” he told the Komsomolskaya Pravda daily on April 27.

Russian media blamed the destruction of thousands of apartment buildings in Mariupol on the Azov fighters – and accused them of using civilians as human shields.

“Those who tried to get out were either turned around at roadblocks or shot dead in cold blood,” Russian journalist Dmitry Grigoriev claimed in early April. 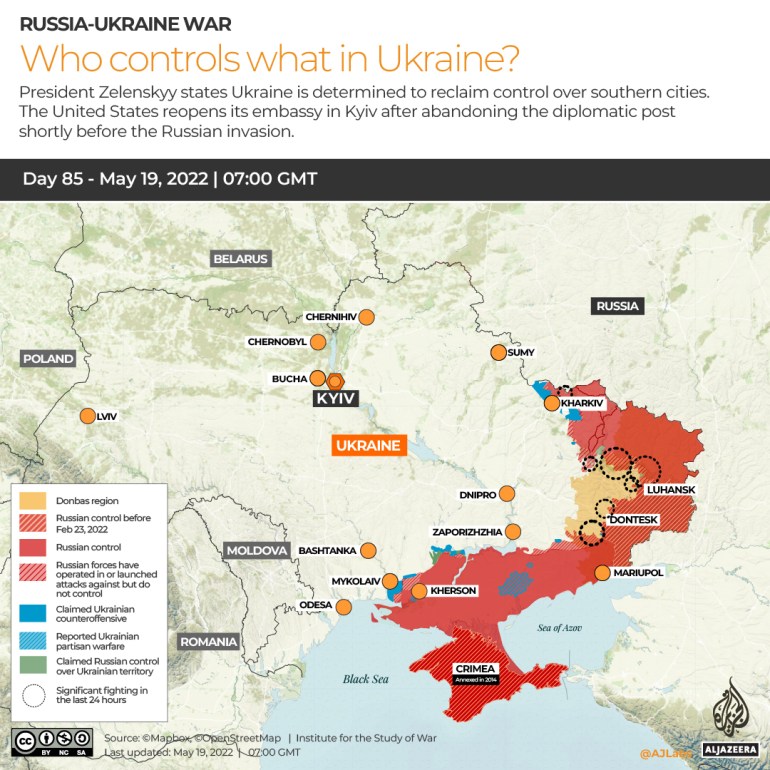 The message of Kremlin-controlled media is so pervasive, it reaches ethnic Russians half a globe away from Moscow.

“They lost and gave up. They are being treated by nurses, not killed on camera or have their knees shot through,” Nadezhda Balayan, a native of the western Russian city of Voronezh, who lives in Oakland, California, told Al Jazeera.

A Russian senator said on Wednesday they should never be swapped and returned to Ukraine to be lionised.

Instead, they must stand trial and be sentenced to death in the separatist-controlled so-called People’s Republics of Donetsk and Luhansk, which live according to Stalinist constitutions that allow capital punishment, Andrey Klishas said.

“All the neo-Nazis from Azov should be tried for the crimes they committed in Donetsk and Luhansk,” he said on Telegram.

Some Ukrainians say the trial and the predictable death sentence may become a reality show for Kremlin-controlled television networks that will sugarcoat Russia’s failures to seize the capital, Kyiv, and northern Ukraine.

“This is going to be their revenge for all of their failures here,” Oksana Galushko, a 22-year-old university student, told Al Jazeera.

And to the residents of Mariupol, the imminent fall of Azovstal is the last straw in the tragedy of having their hometown destroyed and their lives upended.

Sergey Vaganov is a 63-year-old photographer who fled Mariupol in mid-March after surviving weeks of incessant pummeling by Russian bombers, cruise missiles and heavy artillery.

He is having his severe asthma treated in Uzhhorod, a town in southwestern Ukraine untouched by Russian shelling. But the news about Azovstal’s fall overwhelmed him.

Even though the resistance did distract Russia’s advance in other areas, it no longer made sense.

“Those with the battlefield experience have been pulled out [of Mariupol] and thrown into the areas of fierce fights in [the towns] of Severodonetsk and Lysychansk,” he told Al Jazeera.

“Most of the battle-ready forces have long been pulled out of Mariupol,” said Pavel Luzin, a Russia-based defence analyst for the Jamestown Foundation, a think-tank in Washington, DC.

He said Moscow has to keep a large military presence in Mariupol where tens of thousands still remain despite a lack of water, electricity and natural gas.

“Those who stormed Azovstal won’t change things in other places, and [Russia] still needs to keep forces there to control that desert,” said Luzin.